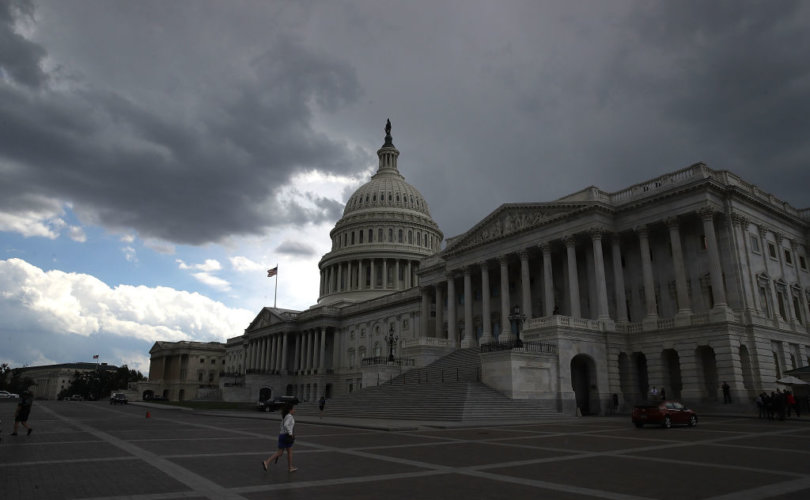 (American Thinker) – These are the times that try men’s souls. Patriotic, law-abiding Americans have been voicing their grievances against the federal government for years, if not decades.

They have urged state governments to reclaim powers stolen by federal authorities, and they have begged federal politicians to return to a system of true federalism, separation of powers, and balanced government. They have screamed at the top of their lungs for Congress to stop spending money it does not have and to fulfill its decades of promises to secure the porous Southern border from endless illegal immigration saturating small interior communities with crime, murder, drugs, and social disintegration.

The federal government has refused to listen.

A mere four years from the 250th anniversary of the thirteen colonies’ Declaration of Independence from Great Britain, and much of America now sees history repeating itself. A tyrannical system of government that rules imperiously from its royal city walls has become every bit a threat to human liberty today as it was two and a half centuries ago. A faceless, unelected, and unaccountable administrative army makes and enforces its own rules and uses its byzantine system of regulation and taxation to intimidate ordinary Americans into compliance and submission.

READ: The pro-abortion movement is becoming so radical, it’s now leaving feminists behind

A nefariously partisan DOJ and FBI hunt political opponents and citizen-dissenters as enemies of the state. An independent and obscure collection of intelligence agencies use their obscene powers not to keep the United States safe from foreign attacks, but rather to keep the American people under a constant state of surveillance.

With every tool for silencing public debate at its disposal, the United States government seeks to make itself impervious to the will of America’s voters. No nation can remain united when its corrupt politicians betray their representative duties. No country can endure when its government views its citizens as enemies. No constitutional republic can survive when its bloated bureaucratic system undermines its own constitutional limits. Peace will not hold.

The federal government has two chief responsibilities to the American people: (1) to protect the nation from foreign threats and (2) to maintain a limited system of government that preserves and maximizes Americans’ personal liberties. It has failed in both duties.

Instead of securing the nation’s borders, the U.S. government concerns itself with Ukraine’s. Instead of preventing Islamic terrorists from killing Americans, the FBI hunts patriotic Americans as domestic terrorists. Instead of ensuring America’s energy independence and strengthening America’s industrial and manufacturing self-reliance, the federal government’s international “trade deals” and Green New Deal suicide pacts have made the United States dependent on its geopolitical enemies for survival.

Instead of safeguarding the value of the U.S. dollar and protecting future American generations from unsustainable debt and deficits, Congressional budgets far beyond anything the American taxpayer is willing to support have set the monetary system on a path to inevitable collapse.

For all the federal government’s wasteful money-spending, fondness for foreign wars, commitment to enriching adversarial nations at Americans’ expense, intentional violations of immigration law, and innumerable failures to stop foreign terrorist attacks on American soil, what have citizens received in return? An oppressive regime that uses its religious commitment to cultural Marxism, “climate change” fanaticism, overtly racist Critical Race Theory, anti-Christian bigotry, and ever-changing standards for political “correctness” as an ideological sickle and hammer for crushing American liberty, stamping out free expression, and persecuting every free-thinker.

Why? Because rights, private ownership, and personal freedoms are the most important checks against illegitimate exercises of government power. American freedom is an absolute guarantee against State tyranny. And in the federal government’s embrace of communist principles, it cannot survive if the American people maintain power.

Much will continue to be written about the decision of Washington’s despotic government to raid President Donald Trump’s personal residence on August 8, 2022, in search of a crime — any crime — that can be used as an excuse for keeping him off the 2024 election ballot. What happened at Mar-a-Lago in Palm Beach, Florida may one day be remembered as the spark that finally tore the nation in two. It is important to remember that it is merely the latest in a long train of abuses orchestrated by the federal government against the American people.

When Americans made history by sending a complete “outsider” to Washington, D.C. in 2016, in the hopes of rectifying decades of gross government mismanagement, the levers of the permanent bureaucratic State set to work to usurp Donald Trump’s presidency.

The FBI and DOJ orchestrated massive fraud against the American people by promoting and sustaining Hillary Clinton’s Russia collusion hoax, meant to take down Barack Obama’s successor. A disloyal and hostile Deep State worked to sabotage the Trump administration with innuendo, illegal leaks to the press, and outright subversion of lawful orders. An unscrupulous Congress committed to its own corrupt aggrandizement and united in its efforts to resist necessary reform in the swamp engaged in endless investigation and casual calumny meant to weaken the president’s authority. An irredeemable corporate news media establishment ignored all of Washington’s crimes while promoting its most absurd conspiracies. And the whole wretched bunch transformed understandably raucous January 6 political protests into an immoral, shameless, conscienceless, and Machiavellian opportunity to murder, hunt down, torment, and jail their political adversaries. D.C. is rotten to the core.

If there be anyone remaining in Washington, D.C. who understands the gravity of this moment, now is the time to speak loudly and prominently before the nation’s passions become an inferno. The time is approaching, if it has not already passed, when no governmental reforms or rhetorical promises will save what is broken. In that dangerous moment, desperate pleas from those who remain quiet today will fall on a country of deaf ears. Violence, carnage, and chaos will return, as they always do, when people entrusted with great power choose instead to abuse what’s in their custody. Those silently complicit in the federal government’s overreach today will find no such luxury should the American continent cleave in two.

Americans have begged for their grievances to be redressed. The federal government has chosen instead to poke them repeatedly in the eye. Anyone familiar with American history knows that wounded and wild American patriots are a force to behold. And the scariest thing is…they have not yet even begun to fight!