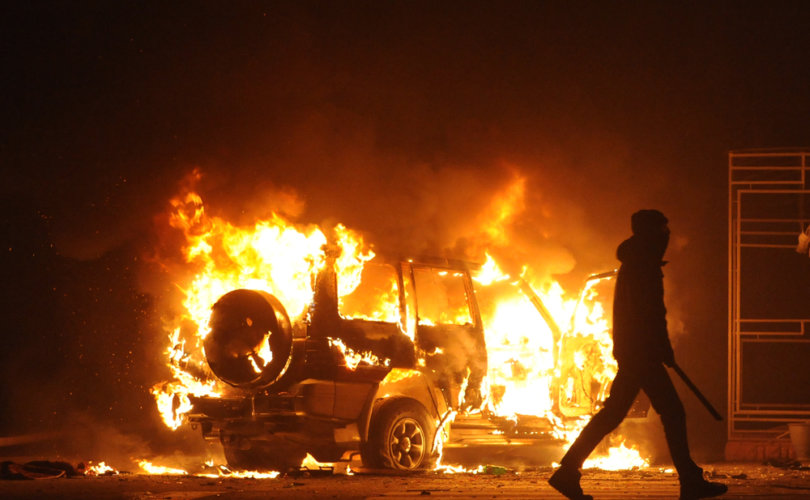 June 9, 2020 (LifeSiteNews) – There is a question that is forming on the lips of many in this country which asks how violent anarchy and insurrection might be justified. It is not a question uttered seriously, but ironically and incredulously.

Taken seriously, it is a question that is standard fare for any American; we are founded on revolution, and that may certainly involve a period of anarchy and insurrection.  Our justification for it is second nature to us, and the answer to why it is sometimes justified is best explained by Washington himself as he describes the American War for Independence to be a decision, fundamentally, about “whether Americans are to be freemen or slaves; whether they are to have any property they can call their own; whether their houses and farms are to be pillaged and destroyed, and themselves consigned to a state of wretchedness from which no human efforts will deliver them.”  The poignancy of helplessness as private property is destroyed by the current riots is particularly apt considering the circumstances, and if applied objectively can be invoked in favor of the police and of the State in general. Although conservatives are often cautious to defend the State, we often forget its most essential and lauded function: to protect those very liberties we value from being violated by others.

But amid this discord, there is nothing so slightly resembling the articulate manifestos of revolutionary America, for it is anarchy and insurrection without revolution and without a clear path toward resolution.  It is voiceless and slightly barbaric; the pulsing reflex of a nerve which knows nothing at the moment but to scream, destroy, loot, and maim. It has failed utterly to resemble a noble cause; it is an ignoble conflagration alien to Washington and alien even to more ruthless revolutionaries like the French Robespierre and the Irish Wolfe Tone, whose fire and brimstone shocked later Americans. But even these men tempered their aggression by solemnly communicating their grievances and designating their enemies with unerring accuracy. Innocents were not their target, and chaos was not their policy.

And so the right and unironic question to ask is just how banditry has been able to cloak itself in the false guise of revolution, and the answer is that a predictable stream of haphazard and careless rhetoric has buttressed its flimsy foundations. From the nation’s most widely disseminated news networks to the top of the democratic party, these bandits have a roster of eminent enablers jeering them on and courting the favor of public opinion. Their inane words have lent considerable weight to each and every weightless criminal undertaking which has marked the regrettable first week of June in America, 2020.

And so it somehow falls to us to punch through this annoying and conjured opacity, and to answer those questions that should otherwise need no clarification. Innocents have been the exclusive target of a deluge of banditry, rendering these events unquestionably evil and wanton—cut and dry, one might say—but here to fog-up this unambiguous affair is Anderson Cooper, one of the sophists who continues to dub the shoulders of insurgents with the blade of knighthood:

“Trump seems to think dominating black people is law and order. He calls them thugs?Who is the thug here? Hiding in a bunker? Hiding behind a suit? Who is the thug?”

It's worth noting here that many of the rioters are, in fact, white. It is important to observe as well, amid this inferno of lawlessness, what an arbitrary feature the skin color of the rioters is. They are, foremost, rioters. This fact is anterior to their skin color, not posterior. But not to Cooper, who insinuates the opposite. His words are deliberately confusing and dishonest; by suppressing anarchy, you must, by coincidence, suppress whatever “skin-color” those anarchists inhabit. The suppressing of this race or that amid any crackdown on riots is, therefore, an extraneous and unavoidable effect. You cannot throw a rioter in jail who is without any skin color, thus, if a purple-skinned rioter is arrested, people like Cooper are given license to say that purple people are being oppressed. It is a remarkably deceptive tactic that is used to modulate the wail of the insane into the cry of the oppressed, to lend ignoble actions nobility, and to taint the forces of good with the stain of evil.

Cooper then appears to confuse the rather uncontroversial definition of a thug, by suggesting that a person who hides from thugs in a bunker is in fact a thug themself, and those who force innocents into hiding by violent barbarism are not. One should avoid even calling this dishonest rhetoric; it is a complete reversion of the order of things, an insulting falsification of truth. Rhetoric may artfully subvert truth at times while remaining false; there is no clever device at play within Cooper’s words. We do not need to labour our minds to unspin them; they merely require a sense of what direction up and down are, such that you may know, when someone tells you that down is up and vice versa, that it is simply not true.

Another example comes from Cooper’s colleague, Jim Acosta, who, after Trump’s widely publicized crackdown on violent and illegal rioting, asked this of the president: “President Trump, is this still a democracy?” This is a further attempt by CNN to lend the immutably benevolent connotations of the word democracy to insurrection, looting, assault, and arson. Acosta suggests that the violent mobs which have unsettled the nation in most major U.S. cities during the past week are endowed with some kind of democratic legitimacy, presumably by way of their magnitude and some degree of popular consent. The suppression of such riots, to Acosta, is therefore undemocratic.

He is using his entirely reductive and generous definition of the word democracy to mean any and all popular movements. He invokes the word democracy in the same way that Cooper invokes skin color: the word carries with it an insuperably numinous and righteous quality that no amount of malevolent quality can apparently undo.

CNN is by no means the only party in all of this that is resorting to casuistic tricks, but their well-known figures are easy to criticize. Relatively few people, on the other hand, know of the Democratic party in Fairfax, VA, who has eschewed the guise of rhetoric and instead bared its shame nakedly, releasing a statement on Twitter: “Riots are an integral part of this country’s march toward progress.”

This requires fewer words to rebuke; it is an open and direct exhortation to the destruction of innocent lives and to violent anarchy. Evil could scarcely take a clearer form.  Several staffers from the Biden campaign have donated money to the anarchists in Minneapolis as well, which we know about from their boasting on social media. Julian Castro, the former U.S. Secretary for Housing and Urban Development, and an unsuccessful candidate for the 2020 presidential election,  has described Trump’s resolve to use force against the violent riots as the actions of a “dictator”. No definitions of that word exist which could substantiate his claim. Force is not in and of itself dictatorial, only the misuse of force, and right now there is ample justification for its use, namely the protection of innocent people from a blatantly violent mob.

Continue, Americans, to ask that ironic question to yourself: “what could justify all that is happening?” Your most basic sense of human dignity and ethics has put this question on your tongues. Free yourselves of that deceptive paradigm which renders the State unable to qualify as a victim itself, and which fails to recognize the potential for the people to exert tyranny. As things stand presently, the police and the U.S. Armed Forces, which CNN would have you believe are the instruments of such tyranny, are in fact laboring to protect innocents from the tyranny of the mob.

One final echo of a real revolutionary, Benjamin Franklin, who offered an example about when the State may “repel force with force”: “It is a true old saying that make yourself sheep and the wolves will eat you: to which I may add another, God helps them that help themselves.”

We must have the courage, therefore, to designate accurately those that are wolves, and those that are sheep, and it is not by watching CNN, or listening to Democrat politicians, that you will find the answer.

Trevor Chase is pursuing a career in genetics as an undergraduate in Washington State. He is an avid reader of history. His traditionalist perspective has recently prompted him to join the Catholic Church. He spends some of his leisure time writing about history, politics, and economics.