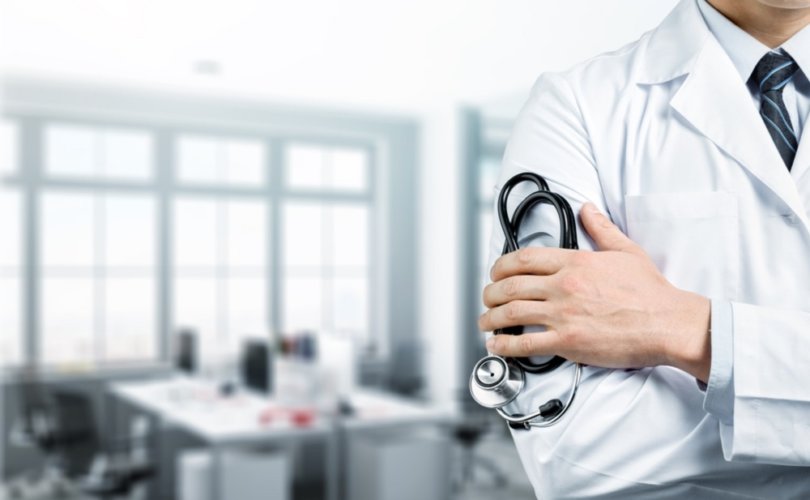 October 15, 2019 (Radiance Foundation) — We unfairly give way too much authority and credibility to medical associations. They're composed of people who are no more moral or ethical than the rest of the human race. Heinous acts have been committed in the name of “medical science” throughout history: Shark Island, Tuskegee Syphilis Experiment, Nazi Science Experiments, Gosnell's Supercoil Experiment, Puerto Rico Birth Control Experiment, Philadelphia Prison Experiments, Children with Cerebral Palsy at Sonoma State Hospital, University of Iowa 'Monster Study', and so many more.

So why do we accept their blatant political activism disguised as healthcare?

The American Medical Association (AMA) just released one of the most ludicrous defenses of abortion ever, entitled: “Ban on standard D&E abortion procedure is unsafe, unwarranted.” Killing our children is unsafe and unwarranted. But, when it comes to abortion, the AMA is interested in not humanity, but histrionics. In its political opposition to Kentucky's H.B. 454 (“An Act Relating to the Human Rights of Unborn Children and Declaring An Emergency”), the AMA laments that pro-life laws put “patients at serious and unnecessary risk.” Isn't that what abortion does to any human being on which it is committed? Significantly increasing risk of preterm births (a major cause of birth defects), triple-negative breast cancer, adverse mental health consequences, and killing millions of America's youngest patients…aren't these negative outcomes unnecessary?

The AMA's affairs with pseudoscience are nothing new. Up until 1953, the organization profited from cigarette ads placed in its own Journal of the American Medical Association despite years of research showing the serious harms of smoking. The ads would even feature “doctors” promoting the cancer sticks. In 1964, when the U.S. Surgeon General issued the first report on how cigarette smoking causes lung cancer, what did the AMA do? They remained silent. When Congress passed the Federal Cigarette Labeling and Advertising Act of 1965 and the Public Health Cigarette Smoking Act of 1969, putting warning labels on cigarette packages and banning cigarette advertising on TV, did the AMA finally sound the alarm? According to a shocking Journal of American Public Health Association article, it wasn't until 1978 that the AMA finally publicly addressed the dangers of cigarette smoking.

How many years and how many millions of lives destroyed will it take for the AMA to do the same regarding abortion?

It took until 2008 for the AMA to formerly apologize for over a century of systemic racism in discriminating against black doctors and preventing them from joining the nation's (mis)leading medical society. Black physicians had to create their own organization called the National Medical Association (NMA).

Sadly, the NMA has abandoned facts for fiction, too, when it comes to abortion — the leading killer in the black community with rates up to 5 times higher than the majority population. When did a negative health disparity become something to defend? Deaths of unborn black lives, via abortion, are 69 times higher than HIV deaths, 31 times higher than all homicides, and nearly 4 times higher than both cancer and heart disease deaths.

Despite this, the NMA promotes Planned Parenthood — an organization birthed in eugenic racism and elitism. The abortion giant kills an estimated 250 unborn black lives every day. The late trailblazing Dr. Mildred Jefferson, who became the first black woman to graduate from Harvard and first woman to become a general surgeon at Boston University Medical Center, denounced Planned Parenthood and its eugenic DNA. She declared that Roe: “…gave to my profession an almost unlimited license to kill.” In a 1978 article in Ebony, she called out the blatant racism of the abortion industry, saying: “I would guess that the abortionists have done more to get rid of generations and cripple others than all of the years of slavery and lynchings.”

Yet, the NMA falsely and bizarrely claims that pro-life bills challenging Roe, especially in the black community, are “fraught with issues that are severely detrimental to the health of mother or child.” Isn't killing the child “detrimental” to the child? Aren't harming a woman and increasing her risks of triple negative breast cancer and negative mental health outcomes “detrimental”? An induced first-trimester abortion is, according to the National Academies of Sciences, a known medical risk factor associated with preterm births. Isn't a disparity in preterm births (a leading cause of infant mortality), which is three times higher among black women, “detrimental” to mother and child?

Similarly, the AMA complains that Kentucky's pro-life bill (are we really squabbling over how we kill our posterity?) “criminalizes the state's primary second-trimester abortion method without safe, available, and reliable alternatives.” Safe? Not killing anyone, which is available to everyone, is safe. Reliable alternatives? Women deserve reliable alternatives like completely free pregnancy support, maternity homes, and adoption.

AMA sums up its extremism in this statement: “… medical literature shows that a fetus likely cannot experience pain at any gestational age, because it is kept in a sleep-like state by environmental factors in the uterus, including certain hormones and low oxygen levels.” Really? So the day before a child is born, she is so asleep that she wouldn't feel her body being ripped apart? Never mind the increasing number of studies showing that unborn babies can feel pain as early as 20 weeks gestation. It's strange, too. Guess the AMA never heard of fetal anesthesia, done for purposes of pain management, for surgeries on unborn children.

Nope. Not without scrutiny. America, pursue that second (fact-based) opinion.

I'll trust those, like the American Association of Pro-Life Obstetricians and Gynecologists (AAPLOG), who see every human life — born and unborn — as a patient. I will trust those who don't see induced death as a “medical procedure.” I'll trust former abortionists, like Dr. Anthony Levatino, who say abortion is never medically necessary.

I'll trust those who speak truth and defend human life, no matter the consequences to their “professional” reputations. People and principles are always more important than politics and profit.