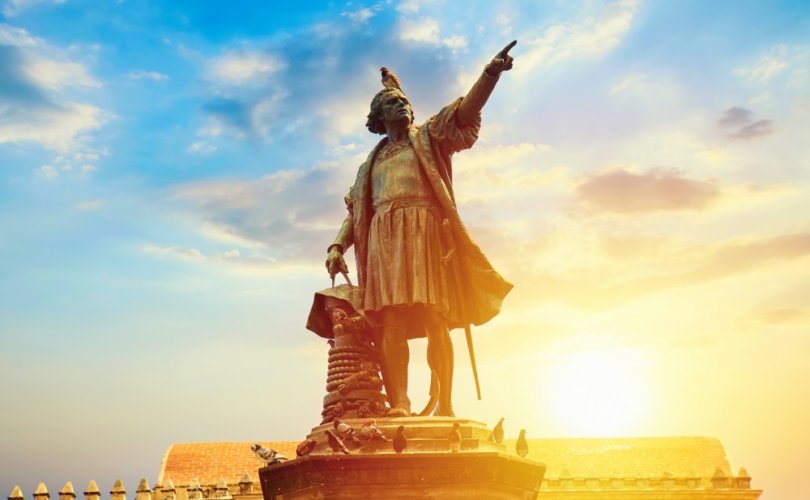 October 5, 2020 (Catholic Culture) — Imagine a man so profoundly disappointed with his own life that he doesn’t know whether he should celebrate his own birthday.

American society may be that man.

Seven days from now Americans will observe Columbus Day. I say we’ll “observe” the day, because while for some Americans the discovery of the New World by an European explorer is a cause for celebration; for others, it is a cause for mourning — or more likely for protests.

When Christopher Columbus landed, 528 years ago, he introduced Christendom to America, thus allowing for the creation of the society in which we now live. Traditionalists see that as one of history’s great triumphs. But leftists insist it was a great tragedy, and fashionable public opinion is unsure. The public celebrations — if there are any — will be quiet; to celebrate Christopher Columbus today is to court the wrath of politically-correct censors. Protests will be more assertive, and enjoy more sympathy from the mainstream media.

“If the arrival of our civilization and religion on these shores — whatever later evils ensued — cannot be calmly discussed, let alone defended, what are we now as a people?” That question — posed by my friend Robert Royal, the author of Columbus and the Crisis of the West — requires an answer.

Yes, we could wish that European discoverers had not brutally subjugated native Americans. But it was not their Christian faith that motivated them to do so. Indeed the best of Christians, like Bartolome de las Casas, strongly protested the mistreatment of native tribes, showing how clearly it violated the principles of Christian morality.

True, Christian conquerors showed little respect for the cultures they encountered in the New World. But in some cases, at least, their contempt for native traditions was amply warranted. Should Cortes have been more respectful of a pagan faith based on the bloody sacrifice of children? Come to think of it, is it mere coincidence that today, the harshest critics of Cortes are found among those who support the legalized slaughter of unborn children in our own time?

Columbus Day did not become a federal holiday until 1937, but local celebrations began many decades earlier. In the late 19th century, those celebrations provoked a backlash from the Know Nothing movement, which opposed the massive immigration of Catholics — including the Italians who held Columbus in particular reverence. And again it is no coincidence that today, that same ideological anger that prompts rioters to pull down statues of Christopher Columbus is also motivating the desecration of Catholic churches.

“What are we now as a people?” In a time of societal crisis — a time of deep divisions, a time when episodes of violence threaten to erupt into a larger conflict — we need to address Robert Royal’s question calmly and directly. So I am happy to announce that Royal, along with two other distinguished speakers — Christopher Check, the president of Catholic Answers, and Wilfred McClay, who heads the Center for the History of Liberty and the University of Oklahoma — will be speaking on that question in a webinar scheduled, appropriately enough, for this Columbus Day, October 12.

The forum is provocatively entitled: “Rediscovering Columbus: A New Adventure in the Age of Cultural Obliteration.” Sponsored by my colleagues at Thomas More College, it will take place from 1 to 2:30 pm, Eastern time. Participation is free and open to all, but registration is required for the video link.

Published with permission from Catholic Culture.