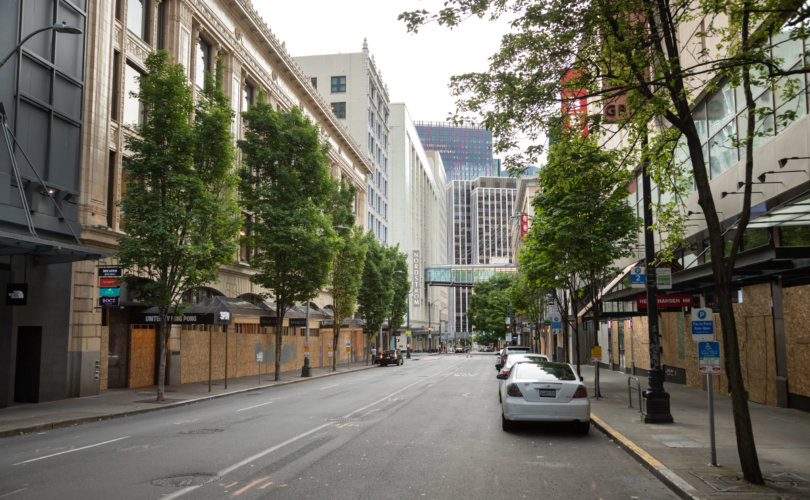 August 19, 2020 (LifeSiteNews) – Rick, an old high school friend, is a retired school teacher who enjoys probing people’s opinions on Facebook. His political views are generally centrist, and most of his posts are pop-culture-related, but from time to time, he ventures into areas of controversy.

He recently put up a photo of a damaged building in Seattle, its windows broken from the rioting, and the sidewalk in front strewn with trash. Most people commenting reacted with disgust at the image — some with explicit denunciations of Democrat-led city and state governments, a few with strong appeals to vote for Trump.

I think this array of views tracks pretty closely with public opinion nationally on the ruin of a once-highly livable West Coast city. But there was also a scattering of reactions that reveal another, more disturbing outlook.

One commenter, named Kenneth, acknowledged that the photo obviously reflected a “failure in government.” But he lamented:

“It pains me to think this could become a reason to stay with Trump. I understand that people demand stability in the face of chaos.”

“It’s easy to understand that Germans post-WWI were desperate for a savior and we know how that turned out.‬”

In other words, no matter how thoroughly Progressive policies have failed Seattle, Trump is Hitler.

Another commenter, named Teri, made a bipartisan plea: “For once the parties should work together. Stop blaming each other.‬”‬‬‬‬‬‬‬‬

While someone named Diane said that she didn’t “know why it’s coming down to politics. I see trash laden streets all over on social media. It comes down to personal responsibility and doing what’s right‬.”

Diane’s opinion was seconded by Jeff: “A lot of people are slobs. Look at our beaches and what has been going on in the oceans. Check out our highways. It is not just limited to Seattle.”

In other words, the trash in that photo is just a matter of littering. Perhaps those broken windows are the result of carelessly thrown Frisbees?

More ominously, a woman named Janet saw Republican hands causing even greater harm. Writing in all caps, she insisted emphatically: “THIS IS ONE SMALL AREA IN A STATE. THE REPUBLICANS HAVE DONE MORE INVISIBLE DAMAGE TO ALL OUR STATES. OUR COUNTRY. DON'T THROW STONES AT DEMS. YOU ARE ENABLERS OF DESTRUCTION.‬”‬‬‬‬‬‬‬‬

Such remarks as those above illustrate how desperately people will cling to ideological assumptions, even in the face of clear proof to the contrary. In moral theology, this attitude is known as vincible ignorance. That’s when you refuse to see a truth set before you, and thus bear responsibility for the consequences of your intentional lack of knowledge.

The phenomenon is of special relevance as Democrats kick off the Biden/Harris campaign and media deception shifts into high gear. Not that it was ever really in low gear. We’ve endured a steady stream of distortion, lies, and calumny since before Trump was elected.

But the floodgates are wide open now.

The latest absurd charge is that Trump is attempting to subvert the U.S. Postal Service in order to keep mail-in ballots from being counted.

Now, it’s true that The Donald has spoken out forcefully against voting by mail. The media keep trying to assure us that concerns about voter fraud are “baseless,” and there is “no proof” that the electoral system is subject to interference (except by the Russians), and questions about ballot integrity are really just cover for nefarious efforts to “suppress the vote in minority communities,” and it all comes down to racism anyhow (and, by the way, Trump is Hitler).

Some people desperately wish to believe any charge against The Donald. In a similar manner, they persist in their willful ignorance of Joe Biden’s mental deterioration, no matter how obvious it becomes (and it’s getting more obvious all the time).

In our society, we tend to cut people a lot of slack when they don’t keep up with the news, or their attention is diverted by personal, economic, or family concerns. Politics isn’t everything, we say. We have more to think about in life, and the great blessing of our freedom as Americans is that we’re able to conduct our pursuit of happiness in our own ways.

That’s all true. But there’s a downside to this freedom. It allows us to fall back on our preconceived notions or long-accepted ways of thinking, and not trouble ourselves over unpleasant contradictory realities.

At this particular moment in history, that’s a problem.

America is experiencing an intense, focused, and well-funded attack, designed to transform our political structure, economic system, societal organization, every aspect of how we live. That photo showing the aftermath of rioting is only one small sign of a revolutionary movement that’s gaining momentum and receiving encouragement from — or at the very least, not being resisted by — the Democratic Party.

While the media have done their best to downplay the chaos erupting around the country, people know what’s going on. It’s just that some refuse to acknowledge the extent of it or the motives behind it. And to persist in denial of the threat we face is a kind of vincible ignorance we can no longer afford to excuse.

If you won’t acknowledge the attack on our nation, you are aiding it.

To indulge in a pop-culture reference — something my friend, Rick, might enjoy — the rioting has caused much sleeplessness in Seattle and other cities directly affected. But if we don’t acknowledge truth, very soon the entire country may awake to find itself in a nightmare.

Bill Kassel is a writer, media producer, and communications consultant based in Michigan. He hosts “Free Expression,” a radio series and podcast produced by Good Shepherd Catholic Radio. And his writings have appeared in numerous publications and online journals, as well as on his blog, “The Guy in the Next Pew” (billkassel.com).