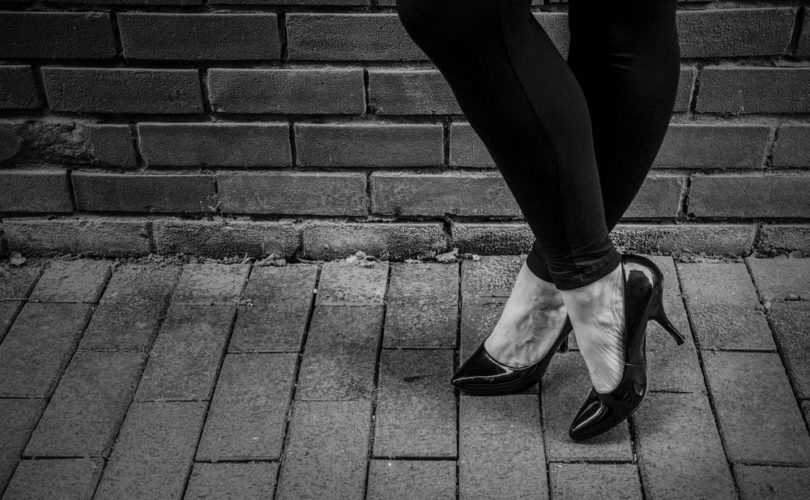 August 7, 2015 (MercatorNet) — This weekend, delegates at an international conference of Amnesty International are due to vote on a proposal that Amnesty should advocate the full decriminalisation of prostitution. That’s right; the organisation founded to shame governments into releasing prisoners of conscience, might next week be lobbying states to remove the last shackles from a trade that most people still regard as shameful. And all in the name of human rights.

This drama is to play out in Dublin, the new world capital of sexual enlightenment, while from Hollywood and other benighted locations the protests of celebrities such as Meryl Streep, Kate Winslet and 1960s feminist icon Gloria Steinem ring out in support of women’s groups that are appalled at this development.

Since its early days Amnesty’s mission has evolved to cover a wide field of human rights, and this is the basis of its argument for the removal of penalties not only for sellers of sex, which is already widely accepted, but also for buyers and brothel keepers, which is not. The rights in question range from physical integrity and health, through “just and favourable conditions of work”, to privacy and freedom of (sexual) expression. Together they amount to a human right to buy and sell sex.

According to a leaked draft policy circulating since early last year, legal sanctions, even when limited to bans on street work and corralling of “sex work” into red light districts, contravene the freedom of “sex workers” and their clients to express themselves, and undermine conditions supporting the health and safety of the “workers” and other basic rights such as decent housing.

However, in drawing the blanket of human rights over what has always been regarded as a human weakness, Amnesty risks debasing the concept while exposing even more people to real human rights abuses. And by refusing to talk about human dignity (I could not find the word in the draft document), the organisation closes off a moral perspective that still has meaning for society.

The UN was there first

Yet Amnesty would not be the first to take this path. Various arms of the United Nations, The Lancet medical journal and The Economist magazine are just the more respectable advocates of this step, and several jurisdictions have taken it already. Among them are Germany, the Netherlands, New Zealand and the Australian state of New South Wales. In these places, although there are varying degrees of regulation to reduce its social impact (since not everybody is happy to have a brothel next door), both the buying and selling of sex are treated as legitimate behaviour for adults. Officially, anyway, prostitution has become “sex work” and has its own unions and political voice.

In many ways decriminalisation seems the natural policy for our post-modern era: driven by personal choice, sexually amoral, hard-headed and materialistic – qualities celebrated by The Economist in its long campaign for decriminalisation. According to that magazine the internet is transforming the trade from a seedy and – thanks largely to prohibition – very risky one into something finely-tuned, brand conscious and “more like a normal service industry”. Governments, it says, should get out of the way and let consenting adults do what they want. It would pour billions more into the economy.

But this approach runs totally counter to what women’s rights and anti-trafficking groups have been advocating for more than a decade, and they are furious with Amnesty’s leadership for making common cause, as they see it, with libertarians, pimps and traffickers.

‘The issue is harm, not choice’

The Coalition Against Trafficking in Women International (CATW) has a petition at change.org with nearly 7500 supporters calling for a “No” vote on the proposed policy. An accompanying open letter is “signed by more than 600 national and international women's rights groups, leading survivors of the sex trade, human rights advocates, medical doctors, Hollywood actors and directors, fashion designers, faith-based leaders and concerned individuals from over 30 countries”.

Amnesty’s own membership is divided over this development. Former staff member Jessica Neuwirth, who left Amnesty 25 years ago to found Equality Now, a women’s rights organisation dealing with issues such as trafficking, sent a letter to all AI senior officials in February 2014 denouncing the draft policy as a piece of advocacy that did not acknowledge the intrinsic harm of prostitution to women, even if they appeared to have consented to it.

“The issue is harm, not choice,” she wrote, comparing the choice some women make of prostitution to the choice of female genital mutilation by women and girls within a certain cultural context (something that Amnesty was slow to recognise as a human rights issue). People also choose debt bondage, she pointed out. “Does that make debt bondage a human right rather than a human rights violation? Is Amnesty International going to endorse the right to be exploited in the context of prostitution?”

Neuwirth here represents the mainstream feminist position, which sees prostitution (she rejects the term “sex work”) in terms of raw male power and the victimisation of women and girls, who are either forced into this exploitative sex by traffickers, or “choose” it because they have few or no other choices available to them to survive. The goal of policy therefore should be to shut down the sex industry completely and focus on supporting vulnerable women into proper jobs and a new modus vivendi.

The Nordic model: clamp down on the buyers

For this reason most women’s groups champion the law adopted by Sweden in 1999 which decriminalises sellers of sex but prohibits the buying of sex along with pimping, procuring and operating a brothel. Similar laws have been passed by Norway and Iceland (hence, the “Nordic model”), Northern Ireland and, most recently, Canada and France – the last, to the accompaniment of street protests by prostitutes.

Debate continues about the justice and effectiveness of these laws. A recent Swedish government report cited by the New York Times says street prostitution has fallen by more than half since 1995, and surveys suggest that the number of men who bought sex fell by nearly 40 percent. But free marketeers and other critics say the trade has simply been driven underground, making it more risky for the women who sell sex as they “do deals” too quickly — before the “client” gets arrested — and go to unfamiliar premises chosen by him. Feminists say full decriminalisation will increase trafficking, but supporters of the move point to New Zealand, which has had such a regime since 2003 and appears to have no such trend.

That is not surprising for an island nation thousands of miles from the nearest traffickable populations. However, it would be a mistake to think that prostitution is uncontroversial here, as ordinary citizens badger local governments to keep “sex work” out of their street and away from their businesses and children’s schools. And there were almost audible sighs of relief across the city last year as plans for a mega-brothel in downtown Auckland fell through. In a worrying trend, however, under-age prostitutes regularly feature in newspaper stories, the victims of chaotic homes and sexual abuse rather than trafficking.

A crucial point emerges from the New Zealand experience: while many people would be happy if prostitution simply disappeared into the mainstream service sector as The Economist envisages, few people regard it as harmless, and no normal person wants it happening in their neighbourhood.

The basic issue is human dignity

Why? Because it is undignified. Renting out your body or someone else’s reduces a human being to a sex toy, a thing, which, when it is broken or worn out can be left in a corner to rot. Society might be reorganised to make this kind of “expression” relatively safe and healthy, as Amnesty and like-minded groups believe “states must” (to quote a phrase appearing often in the draft document) but nothing can make a sane person believe that human rights require it.

Should we then throw in our lot with the feminists? They at least see that prostitution is harmful and we need to get rid of it. And they have retained a sense that prostitution is incompatible with women’s dignity (the word “dignity” actually appears on the CATW petition) if not men’s. But critics have a point when they say that, by insisting that all prostitutes are by definition victims, the women’s rights groups deny personal “agency” to these individuals and disempower them. Doesn’t that offend their human dignity as well? Isn’t it possible to victimise yourself?

No doubt there are people in the sex trade – in some countries more than others – who have been tricked and forced into it and held more or less captive there by crime bosses. And many others whose deprived backgrounds make it easy to drift into prostitution and become stuck there. But there are others again who boldly claim that they have chosen their “work” and are prepared to wave banners in public defending it. Why should we disbelieve them?

There is obviously more to rolling back the tide of prostitution than simply criminalising buyers and pimps, and rescuing victims. The larger task is a cultural and educational one aimed at restoring a sense of the purpose of sex in the context of human dignity. In that we are up against not just pimps and traffickers, not just “male power”, but against a pervasive degradation of sex seen at every level of society. Amnesty’s bid to declare prostitution a human right is just the latest symptom of a cultural derailment.