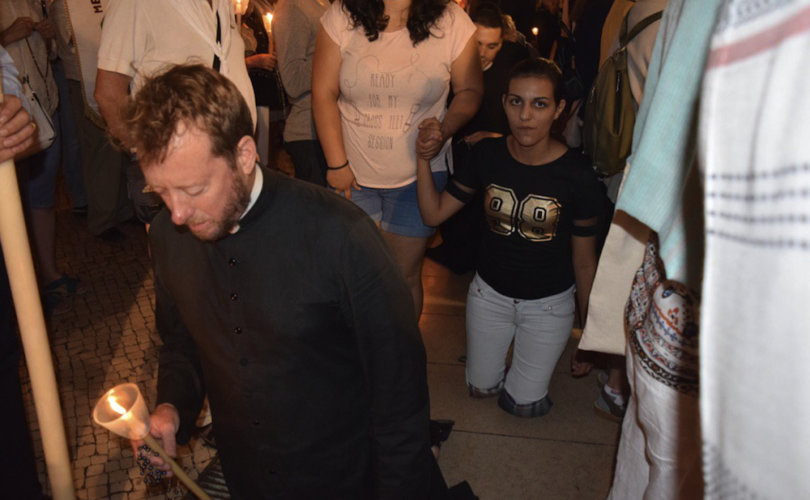 August 7, 2017 (Wanderer Press) — Catholics have never been and never should be expected to dodge bullets in order to negotiate an enemy minefield in their search for truth in the hands of the Church’s shepherds. Teaching should be clear consistent and unambiguous. This Amoris Laetitia (AL) is not.

Amoris Laetitia cannot be recommended reading for everyone because it is not safe. As a Catholic teaching document, it is not sustainable and will one day have to be heavily edited and stringently corrected in order to be a reliable help to souls.

We find ourselves in a situation of ecclesial disorientation where, for the first time, a papal teaching document of the highest rank is used to float pet theories of discredited theologians from retired ranks of cardinals and rejected episcopal candidates from Argentina whose corpus of distinguished work includes titles like “The Art of Kissing.”

Certainly I support every infallible instance in the document of Catholic faith and morals. This is without question. But I must reject every statement in direct contradiction to the divine teaching of Our Lord and Savior Jesus Christ. Every other bishop and faithful member of the One, Holy, Catholic, and Apostolic Church must do the same.

For these reasons I with regret must say that I can recommend Familiaris Consortio only as the most current orthodox papal document among recent pronouncements to which one can look for clear and right teaching on marriage and the family.

Some may counter by responding that there are many good things in AL. And with this I agree. But I must state with many others that the value of a soul and the serious work of salvation cannot be endangered by ambiguous and faulty documents inconsistent with perennial Catholic teaching.

Some may react to my comments with horror, as though by them I place myself outside the circle of Catholics in good standing. To this I respond by reminding them that throughout history, beginning with greats no less than St. Paul and continuing with St. Catherine of Siena, it has been entirely within and necessary to the most sound Catholic traditions to offer critiques to any and all of our leaders, including the Pope.

It is primarily our bishops who have this responsibility, and the three remaining living cardinals who signed the dubia stand within this hallowed tradition. Many remain silent. Many composing the sensus fidelium, with no voice or rank, stand with the cardinals.

So AL is a mix of good and bad, like life itself, but should it not rather serve as a teaching document rather than simply as a mirror held up to contemporary life? We already know well that human beings suffer weakness and commit sins. It is for precisely this reason that the Church must speak with the truth and with consistency, not with the voice of the contemporary world and its errors. When the mix offered in a Church document includes heresy, any shepherd who does not in reaction speak out in defense of the sheep declares himself an enemy of Christ.

For an example of those elements which demand correction, in order to make it possible to fully support AL as a sustainable teaching document rather than a mere commentary on contemporary man, in n. 297 the Pope writes:

“No one can be condemned forever, because that is not the logic of the Gospel! Here I am not speaking only of the divorced and remarried, but of everyone, in whatever situation they find themselves.”

To say such a thing, however, places oneself in direct contradiction to the clear teaching of Jesus Christ Himself, who taught that body and soul can be cast into Gehenna should one die in rejection of Him. One cannot thus deny constant Church teaching in accord with Christ’s words in the Gospel that eternal damnation is a radical possibility for every human being.

Here is a commentary of canonist Edward Peters from his blog In the Light of the Law on this very subject:

“In AL 297, Francis writes: ‘No one can be condemned for ever, because that is not the logic of the Gospel!’ To the contrary, it is precisely the logic of the Gospel that one can be condemned forever. CCC [Catechism of the Catholic Church] 1034-1035. If one meant, say, that no one can be ‘condemned for ever’ by earthly authority, one should have said so. But, of course, withholding Holy Communion from those in ‘public and permanent adultery’ is not a ‘condemnation’ at all, so the point being made is not clear.”

Medicinal corrections in the Church such as instructing someone civilly remarried after a first Catholic marriage not to receive Holy Communion, or even imposition of excommunication, are a means to call erring souls back to spiritual Communion with the Lord in His one true Church.

It is because the Church is not an exclusive society or club that such corrections are applied and taken seriously. The shepherds of the Church, who serve only in the name and power of Jesus Christ the sole Savior, owe it to humanity as well as to the One they serve to faithfully and consistently apply all the remedies at their disposal to correct those in error and spare no effort in the task of bringing them back to the “harbor of truth and unity of faith.”

Here the Holy Father asks that a special exception be made in one case to no longer call sin by its name:

“It can no longer simply be said that all those in any ‘irregular’ situation are living in a state of mortal sin and are deprived of sanctifying grace” (AL, n. 301).

Faith and morals, in fact, are simple. One is either doing right or committing wrong. It is the role of the Church to inform consciences with the truth so that individuals may have the ability to examine themselves in its light. The Church may never, however, under any circumstances change the truth and thus deny souls the means they need from God to know the good and true and thus pursue it while rejecting sin for the sake of eternal salvation.

Here the most generous response of love given to God is no longer measured by God’s standards of holiness but by some other self-determined yardstick:

“. . . can also recognize with sincerity and honesty what for now is the most generous response which can be given to God, and come to see with a certain moral security that it is what God himself is asking amid the concrete complexity of one’s limits. . . .” (AL, n. 303).

Bishop Athanasius Schneider raises the problem of the glaring absence of Christ’s clear teaching in AL:

“If we analyze certain statements of AL with intellectual honesty within their proper context, we find ourselves faced with difficulties when trying to interpret them in accordance with the traditional doctrine of the Church. This is due to the absence of the concrete and explicit affirmation of the doctrine and constant practice of the Church, founded on the Word of God” (Bishop Schneider, “Amoris Laetitia: A need for clarification in order to avoid a general confusion”).

With a few changes AL can become what we all expect of a papal document that is of the highest teaching authority in the Church: “concrete and explicit affirmation of the doctrine and constant practice of the Church.”

​Fr. Kevin Cusick is a former Army officer who was ordained in 1992 and served as a military chaplain. He is now pastor at St. Francis de Sales Church in Benedict, Maryland.

Reprinted with permission from The Wanderer Press.