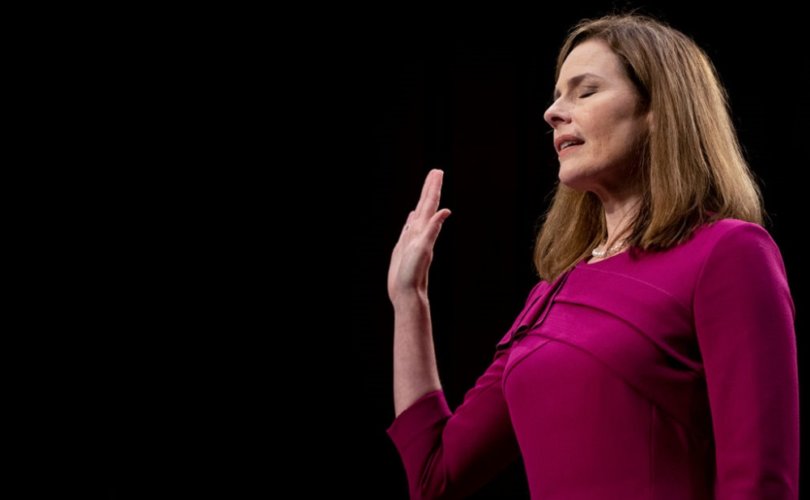 October 12, 2020 (LifeSiteNews) — Everyone knows that the Supreme Court Justice confirmation hearings are not about Amy Coney Barrett, her qualifications, or the Constitution.

Of course, everyone goes through the theatrics of what the hearings are supposed to be. The Senate Judiciary Committee’s liberal members will dutifully cast themselves as the Constitution’s guardians. They will dramatically insist that the nominee declare her respect for the law of the land, which, so they believe, is in constant evolution.

The committee members will wrongly ask Mrs. Barrett to affirm that her personal beliefs and faith will not influence her decisions — even though their personal beliefs definitely are part of the interrogation. She must politely say she will respect precedent and settled law while carefully avoiding getting into specifics.

“Settled law” that unsettles everyone

Intense as these Senate formalities always are, they merely cloak the real issue. Roe v. Wade, the infamous Supreme Court abortion decision, is definitely part of the issue but not its core.

As much as the left likes to insist that Roe v. Wade is settled law, the raging debate nearly fifty years afterward clearly shows that it is not. Elevating the decision to the infallible legal dogma level is a travesty that insults the millions of Americans who believe abortion is murder.

Moreover, leftists know that Roe is not settled law because they admit that it was a mistake, built upon shoddily crafted legal doctrine. None other than Ruth Bader Ginsburg declared in 1992 that the decision was ill conceived since it brutally imposed abortion upon states that were gradually tending to liberalize abortion. Indeed, some feminists now admit defeat and say, “The left has already lost the abortion fight.” They are ready to abandon Roe and quietly move on to other more gradualist strategies.

No one likes Roe v. Wade. On all sides, people reject it. It makes no sense to use a court decision that unsettles everyone as the litmus test for who becomes a Supreme Court Justice.

Roe broke with the moral law

So why the uproar over Roe?

The left fears Roe’s demise because it raises fundamental legal issues that the left wants to keep buried. If Roe is overturned, other dominoes might come falling down.

Indeed, Roe questions the basic assumptions of modern law theory. The positivist notion of law that dominates America today insulates the law from moral, ethical, or religious considerations. Law is considered a hierarchy of accepted value-free norms based on other norms for its validity.

This pragmatic approach claims to see the law as it is and not as it ought to be. Thus, it abstracts from the moral and metaphysical principles that long informed Western law. The State, not God, is the creator of law. A powerful State maintains this law while a decadent culture can take it to absurd extremes.

A reversal of Roe reintroduces the thorny moral question into the legal debate that liberalism had hoped would stay away. It does so with an argument so convincing that it takes great effort and malice to deny its validity: a tiny and frail baby.

The baby cries out against the injustice of this system of value-free norms that arbitrarily decrees his death. The baby’s beating heart appeals to a higher natural law that Saint Paul says is written on all hearts. Based on this higher law derived from human nature and towering far above Roe v. Wade, millions of Americans now realize that killing innocent babies is morally wrong.

If abortion can be banned appealing to this higher law, then similar issues might also be raised. The value-free legal infrastructure of the liberal order might just come crashing down.

The fears of the left

Liberals do not fear Roe v. Wade, which could be made to die a silent death without overturning their legal system. They distrust a Catholic judge since the Church is the guardian of the moral law. They fear that the American public, awakened by the tiny baby’s cries, might demand a return to the moral law.

The confirmation hearings are not about Amy Coney Barrett, her originalist philosophy, or her qualifications. The left knows that the hearings are not only about Roe v. Wade. They are about the moral law’s return to the Supreme Court of the United States of America.