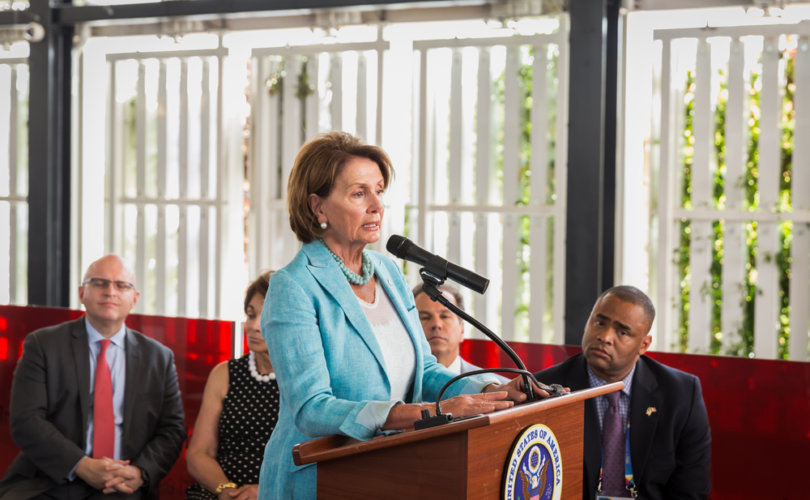 With her support of same-sex marriage, abortion, and so on, it is clear that Nancy Pelosi despises all things Catholic.Tinxi / Shutterstock.com

August 9, 2016 (ALL) — Catholic-in-name-only (CINO) Nancy Pelosi has persisted in her politically charged but morally bankrupt posturing as this year’s election draws closer to reality. I was curious, therefore, when I saw a story quoting Pelosi, who said to PBS reporter Judy Woodruff, “I think that, so many times, white—non-college-educated white males have voted Republican. They voted against their own economic interests because of guns, because of gays, and because of God, the three G’s, God being the woman’s right to choose.”

Her idiotic remark highlights a fact that many of us who love the Catholic faith find totally repugnant. With her support of same-sex marriage, abortion, and so on, it is clear that Pelosi despises all things Catholic. Yet she continues to make public statements that she is a “devout Catholic.” It makes no sense at all.

Her scandalous statements over the years caused one Catholic commentator, Deacon Keith Fournier, to write:

I know that using words as heresy in an age of political correctness—and in the face of a growing syncretism within segments of what still calls itself Christianity—may be considered controversial or inappropriate for civil discourse. However, I write as a concerned Catholic Christian who works with other Christians, across confessional lines.

Fournier tells us that Pelosi’s bishop has publicly corrected her on numerous occasions, but really, that is so far from being good enough that it hardly matters!

I prefer to side with Jerry Newcombe, who has written, “I really do wish Nancy Pelosi’s policies were truly impacted by the word of God. When I see the legislation she pushes for, including all the pro-abortion laws—as just one example—I just have to wonder: Why is she so pro-abortion, when she knows God opposes it?”

Indeed, it is a wonder that among all the members of the hierarchy who have discussed Pelosi’s inane positions, not one has courageously stepped forward and told her point blank that she may not receive the body of Christ in the sacrament of Holy Communion until she repents in public of her public proclamations of support for actions and laws that defy God Himself.

What sort of problem does this create for the average Catholic who will not read this commentary—or others like it—and thus may not ever realize that what Pelosi is peddling is straight out of hell? We worry about that and we have very good reasons for being concerned.

If it isn’t Pelosi bloviating about sins she does not believe are sins, it is Vice President Biden, another CINO, taking time to acquire the credentials needed to officiate at the “wedding” of two homosexuals.

Or it is Democrat Tim Kaine receiving a standing ovation at his parish—a parish where Father Arsenault excuses Kaine’s support for abortion and tells PBS that Kaine is “personally pro-life.”

Over and over again so many priests, including bishops, have avoided the truth for the sake of their personal comfort, their political judgments, or their pride.

So when average Catholics see the Kaines and Bidens and Pelosis of our nation doing and saying things that defy the Lord and His Church’s teachings, those Catholics are either confused or convinced that the very idea of sin itself is debatable.

This is a tragedy that cannot be ignored. It is the cause of an avoidable Catholic crisis. With the passing of each day, the disgrace increases and the nation’s Catholics sink ever deeper into the abyss of ignorance at best, chosen acceptance of evil at worst.

And who is to blame? The silence of those who should never be silent is the answer.

This avoidable Catholic crisis waits for heroic Catholic shepherds to step up and crush it. Where are they?