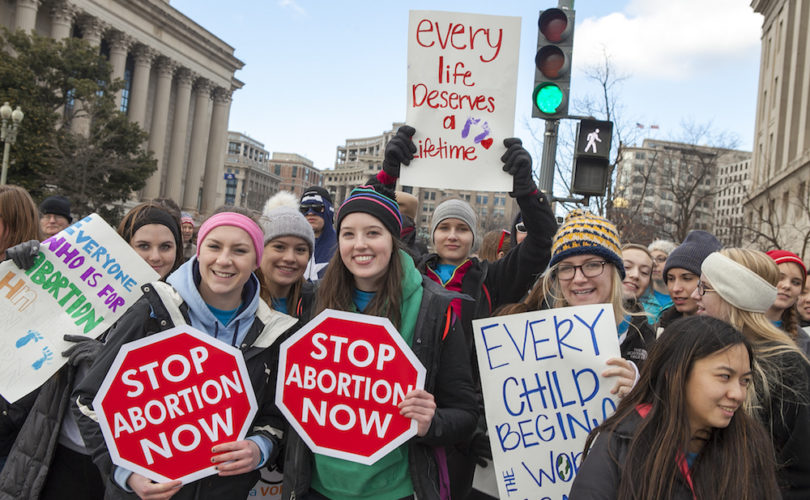 July 8, 2019 (LifeSiteNews) – Having just celebrated the annual observance of our nation’s independence, and reflecting on the great principles on which our Founders built America and for which they pledged their lives, their fortunes, and their sacred honor, I want to take this occasion to issue once again a call I have issued consistently since 1993.

It was at that time that I heard and responded to this same call in my own life, namely, the call to devote all one’s time, energy, and resources to defending the youngest children from the violence of abortion.

There are many people throughout this land who are already living that call, and even more who, while not able to do so full-time, are giving as much time and energy as they can to ending abortion and restoring protection to children in the womb.

The call is to everyone, to do as much as is humanly possible in this most urgent human rights cause of our day.

Many are being called to leave their professions and take those professional skills and devote them to the cause of protecting the unborn, and I want to say today that it is time to answer that call. I want to fan the flames that are stirring in many hearts that realize that the right to life itself, which is being denied to children still living in the womb, is in fact one of the founding principles of this nation, and is the foundation of the entire fabric of social justice.

Abortion remains the most urgent social and moral problem we face, and this is true for various reasons which have not changed.

First, there is nothing in America or in the world that is taking more lives than abortion. It claims more victims than any disease, natural disaster, war, or act of terror.

Second, without life we don’t have anything else. The right to life, as St. John Paul II said very simply, is “the most basic and fundamental right and the condition for all other personal rights” (Christifideles Laici). Presumably, efforts on behalf of the right to health care, to education, or to immigration, are efforts on behalf of people who are alive. Take away the right to life, and you take away all the other rights at the same time.

Third, no group of people are more defenseless than the children in the womb. They cannot speak, or even pray, and do not know the danger they face. If there is a “preferential option for the poor,” a duty to seek first those who are most marginalized and oppressed, an obligation to help the most helpless, then this speaks powerfully to the need to put the unborn first.

Fourth, not only are the unborn the most defenseless, but they are the only group whose very right to life has been completely erased from the law, and for whose scheduled death there are hundreds of legal clinics throughout America. Many injustices claim or threaten human lives. But what other human beings are decapitated and dismembered each day in legal and publicly advertised facilities? An act of violence that is recognized as a crime is bad enough, but when that crime is transformed into a “right,” the evil takes on an even more horrifying dimension.

And fifth, the violence against the unborn is bad enough when carried out by a stranger. But adding to the moral urgency of the problem of abortion is that it is one or both parents, sometimes also with the involvement or pressure of other family members, who are authorizing the violence. Abortion is violence against life within the very “sanctuary of life,” the family. And nothing is more destructive of the whole family than abortion.

For these and other reasons, fighting and ending abortion is priority number one, both for the Church, the state, the family, and each of us individually.

Many issues are urgent. But as the U.S. bishops have taught for decades, these issues are like the different parts of a house, all interrelated, but all dependent on the foundation. Abortion strikes at the foundation of the house, the right to life. (See Living the Gospel of Life.)

Both reason and compassion call us to put first things first. We must end abortion.

Not only is all this true in and of itself, but added to this are the current circumstances in America, which truly constitute a “pro-life moment” of perhaps unprecedented intensity and opportunity. The abortion issue has reached a boiling point in America. In the states, both pro-abortion laws and pro-life laws have gone farther in opposite directions than ever before. Abortion rates, ratios, and absolute numbers are at historic lows. On the federal level, we have never had a more pro-life presidential administration, and no previous administration has been under such vicious attack from its pro-abortion enemies. The national parties are farther apart on abortion than ever, the federal courts are moving in a pro-life direction, and critical national elections are on the horizon that will determine how quickly the national tragedy of abortion will end.

This is the “pro-life moment” in America, and while this issue has always deserved the fulltime commitment of our citizens, there has never been a more appropriate or urgent moment for such a commitment than now, nor ever a moment that had more promise for the fruits of such a commitment.

The effort to end abortion has multiple facets, and therefore requires people from multiple backgrounds to devote their varied skills to the task at hand.

Fighting abortion requires full-time professionals in every field to carry out many interrelated tasks:

Any single one of these arenas, and others not mentioned here, deserves the full-time commitment of professional women and men who can devote themselves completely to the success of these efforts.

As human history has progressed, people have risen to the occasion to help the helpless and put an end to social injustice and oppression. We have seen this in the great movements that have uprooted slavery, ended segregation, and challenged oppressive regimes that have caused death and suffering to countless peoples.

Moreover, across the nation and around the world, people discover their vocations each day as they devote themselves completely to the service of one or another segment of humanity: some specialize in feeding the poor, building homes for the homeless, educating children, practicing one or another specific form of medicine, working to find a cure for cancer, traveling to mission lands to establish the church in a particular location – and the list can go on and on.

It is inconceivable that given all this, that we could fail to meet or fail to value the need for people to rise up in our day and defend the most defenseless children from the most destructive act of violence, namely, abortion.

Let us rise to the occasion at this hour. Inspired by the conviction that history – and Almighty God – will judge us rightly, let us indeed pledge our lives, our fortunes, and our sacred honor to defend the lives of those most in need, the children in the womb.

Fr. Frank Pavone is National Director of Priests for Life, one of the world’s largest organizations focused exclusively on ending abortion.