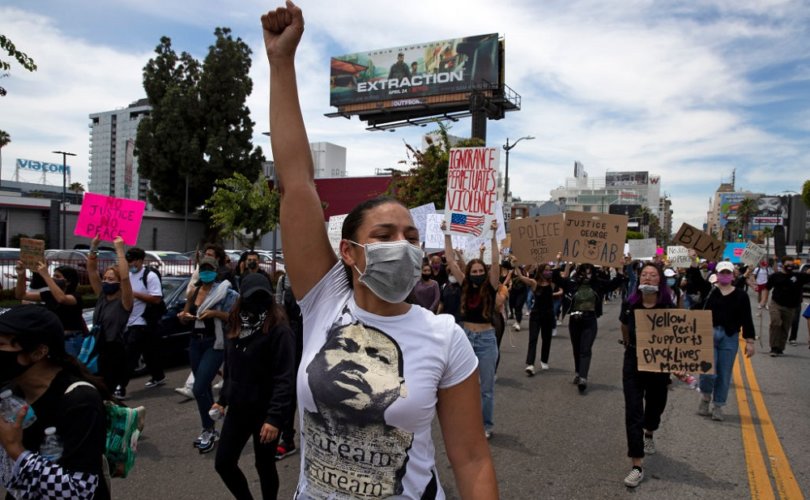 August 11, 2020 (CatholicCulture.org) — When I read the news headline it suddenly all seemed clear. The story reported that new positive Covid tests were attributed to “community spread.” Well of course! That’s how contagious diseases are contracted, right? They spread through the community.

But this is the first time, in our long history of fighting diseases, that we have sought to stop the spread of a contagious disease by abolishing the community.

The phenomena of social distancing, of wearing masks, of viewing every passing neighbor as a threat, of closing down shops and schools and churches — all these steps have been destructive to our communal life. But most Americans have been willing to accept the draconian terms of the lockdown, with our opinion-makers exhorting us to accommodate ourselves to a “new normal.” Why is that? I suggest that in the Western world today many people, especially among the elites, are quite willing to forfeit community life, while others are actively working to destroy it. We are witnessing — perhaps even unthinkingly participating in — the suicide of our culture.

Very early on in the course of this pandemic, Michael Pakaluk made the acute observation that the people most enthusiastic about the shutdown were, disproportionately, the same people who believe that mankind is ruining the ecosystem, that population control is an imperative, that our economic system is driven by greed, that the government is more reliable than the individual, and — above all — that staying alive and healthy is the greatest possible good. With those core beliefs already locked into their thought processes, they were quick to embrace the plan to shut down our economy, our schools and churches, our social lives. They were slow to notice the enormous social and economic costs of the shutdown, because to their way of thinking those costs could actually be benefits.

So now millions of people are unemployed and millions more are desperately lonely and bored and depressed; the rates of suicide and drug abuse and domestic violence have soared; diseases other than Covid are being undiagnosed and untreated; riots are spreading through the cities; and the social life of an entire society — the family gatherings, the children playing, the young couples dating and marrying, the parties and games and concerts — is on hold indefinitely. All this is unfortunate by any reckoning. But it may seem less tragic — it may even seem a price worth paying — if you have no love for our society’s economic and social life, no love for our culture.

Pope John Paul II was the great diagnostician of the “culture of death.” He showed us how the uglier trends in the Western world — the legalization of abortion, the breakdown in marriages, the trend toward euthanasia, the acceptance of aberrant sexuality — were produced by a steady erosion of respect for human life. By embracing contraception and divorce, our society first severed the link between sex and procreation, then invented the fiction that a permanent union can be broken without disastrous consequences. More or less deliberately, we lost the sense that we are related to our great-great-grandparents and our great-great grandchildren — that we owe something to both the ancestors we never met and the progeny we will never see.

“May you see your children’s children!” says the psalmist (128:6). The force of that joyful wish — preserved in the beautiful blessing for a Catholic wedding ceremony — is lost on a culture that thinks of children as incidental to marriage (they may or may not come, may or may not be welcome), and has trouble sorting out, after two or three generations of mix-and-match unions, which children belong to which lineage. When you no longer feel that your children are a part of you, and you are a part of your parents, you become an autonomous individual.

The culture of death has exalted that autonomy, elevating individual choice to become society’s highest value. A person’s choice is prized more highly than truth, and so a man is allowed to proclaim that he is a woman, despite the clear scientific evidence to the contrary. Choice ranks higher than life itself, and so the law now sanctions a man’s choice to end his own life. Justice Anthony Kennedy (who, by the way, identified himself as Catholic) gave full voice to this attitude, and elevated it to the level of Constitutional principle, in the 1992 Casey decision, writing: “At the heart of liberty is the right to define one’s own concept of existence, of meaning, of the universe, and of the mystery of human life.”

Is that the ultimate goal in life: to be a free-floating individual, making up one’s own reality? If so, then there can be no tragedy worse than being deprived of the opportunity to make my own choices. I must be free to break any commitments, to alter any circumstances, that hold me back. I cannot acknowledge any debt to society or even to my family. I must be free.

That notion would be foreign to our ancestors, who had little choice but to accept the risk of illness and early death. It would be foreign, too, to all the people we regard as heroes, who willingly accepted greater risks for greater causes. In fact it is foreign to something fundamental in human nature. We take on risks every day; to risk nothing is to accomplish nothing.

So why, when this epidemic broke out, did we so quickly accept the notion that the normal functioning of our society was not worth the risk? The answer to that question has gradually become clear to me.

The first clue came when Dr. Anthony Fauci, the chief arbiter of acceptable risk (and another Catholic) declined to condemn anonymous sexual encounters, even at the height of the pandemic. “You know, that’s tough,” he said, when asked about the hookup culture, “because that’s what’s called relative risk.” A “relative risk” for the sake of fleeting gratification — for an individual’s irresponsible choice — was somehow less dangerous to the public weal than a normal business transaction or a family funeral.

The next clue, a much more conclusive one, came when Dr. Fauci refused to label the massive “Black Lives Matter” protests as a threat to public health, and mayors who had banned other public meetings welcomed demonstrators to their cities. These were clear and obvious violations of “social distancing” rules and quarantine regulations, yet they were tolerated and even applauded. Why?

Now look at what those demonstrations accomplished. When they were peaceful, they were rhetorical attacks on our society’s history. When they were violent (as they often were), they resulted in the destruction of private property and public monuments. In other words, one way or another, they tore down what our society has built up.

The public meetings that build up our culture — the concerts and parades and lectures and religious rituals — are still banned or tightly restricted. The public events that tend to destroy that culture are allowed, even in flagrant disregard for the reigning emergency regulations. As Yeats put it in “The Second Coming,” (a poem that might have been written about current events):

The best lack all conviction, while the worst
Are full of passionate intensity.

By pulling down statues of explorers and war heroes, violent leftists show their contempt for our history. But they will not stop there, because the veneration of historical figures, while it is a noble display of pietas, is not the ultimate basis for a healthy culture. Far more important is the cult itself: the veneration of almighty God. So it should be no surprise that, having first taken aim at Civil War monuments, the vandals next set their sights on churches — specifically Catholic churches. If your most cherished objective is to be free of all restraints — if your battle cry is “Non serviam!” — you have ample reason to see the Church as your foe.

The question that remains is whether the Church, the People of God, will recognize the danger and mobilize before the active persecution begins and our culture is “cancelled.”