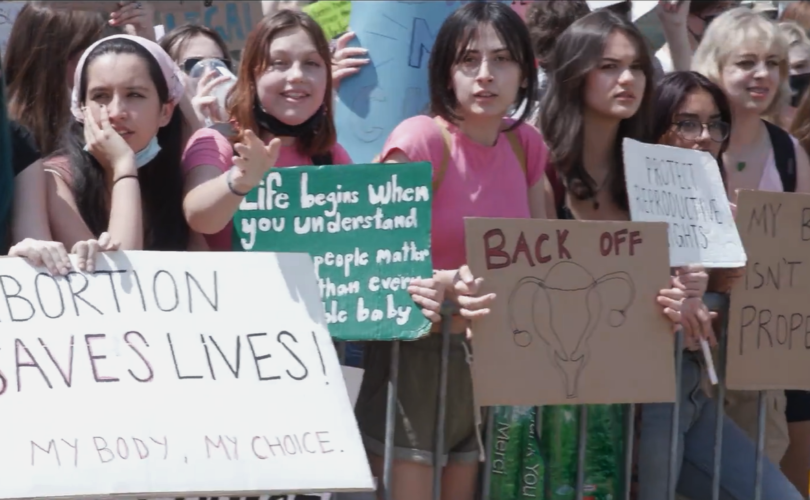 OTTAWA (LifeSiteNews) — The past weeks have seen a surge in pro-abortion demonstrations; however, behind the angry cries of “my body, my choice” are the cries of women hurt by abortion.

On Thursday, I attended the National March for Life in downtown Ottawa. I was surprised to see how many young women came out to protest the march. I have attended the march annually since I was a child, but I have never seen such angry protesters.

As the women screamed the well-known abortion chants, I noticed something behind the anger: a profound sadness. The pro-life movement is one of joy, and the march is known for the happy smiling faces and joyful families.

However, the protesters expressed no such joy. Instead, they resorted to angry shouts. But the looks in their eyes were that of lost women searching for happiness.

Anger arises from sorrow over something good that cannot be attained. Each person searches for happiness and becomes sorrowful if he or she cannot attain it. This sadness is often expressed as anger.

Beneath the cries of anger and the blood of the unborn children are the women left broken and hurt by the abortion industry. Underneath the shouting of chants is a wave of hurt and sadness.

Abortion destroys women as it causes a reversal of their nature. Women were created by God to have a natural love of babies, especially their own children, but mainstream media has spent the past 50 years telling women that children and babies are a hindrance to their happiness.

TV shows and movies portray a negative view of motherhood and parenthood. Children are nearly always portrayed as limiting women and their potential.

Romance movies may end with a happy marriage, but they rarely portray the joys of married life with children. Women have become unaccustomed to seeing children in society. Most grow up with one or no siblings, meaning that they have limited or no memories of their own parents raising babies.

The years of media and movie exposure have created a generation of women who are scared to have babies. But by their very nature, women desire to mother their own children. Denying this need creates a void that women try to fill with distractions such as active careers or pets.

Accordingly, the modern woman fears the very idea of having a baby. Very few truly desire to kill their own child. Instead, when she unexpectedly becomes pregnant, she has been versed in her three options: to keep her baby, to give her baby up for adoption, or to abort her baby.

The first option requires self-sacrifice and facing her fear, a natural fear faced by every new mother. The second requires giving up her baby to a stranger, resulting in separation and an unknown future for her baby. However, according to the abortion industry, the third option will erase all trace of the baby, making it as though it never happened.

This option seems the simplest to many women. However, once they experience the reality of abortion, they realize the loss of their children and the grave injustice they have committed. But there’s no going back, there’s no bringing the baby back to life.

Some of these women acknowledge their mistakes and strive to help others not make the same. Many of these women share their testimonies at the March for Life.

But many women, overcome with grief and guilt, turn to anger. They lament the loss of their babies and will do anything to validate their decisions.