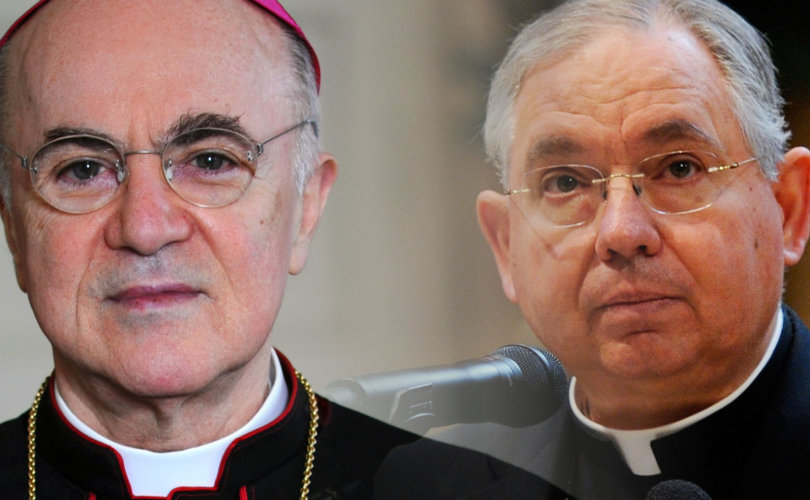 The world in which we find ourselves living is, to use an expression from the Gospel, “in se divisum” (Mt 12:25). This division, it seems to me, consists of a split between reality and fiction: objective reality on one side, and the fiction of the media on the other. This certainly applies to the pandemic, which has been used as a tool of social engineering that is instrumental to the Great Reset, but it applies even more to the surreal American political situation, in which the evidence of a colossal electoral fraud is being censored by the media, which now proclaims Joe Biden’s victory as an accomplished fact.

The reality of Covid is blatantly in contrast with what the mainstream media wants us to believe, but this is not enough to dismantle the grotesque castle of falsehoods to which the majority of the population conforms with resignation. In a similar way, the reality of electoral fraud, of blatant violations of the rules and the systematic falsification of the results contrasts with the narrative given to us by the information giants, who say that Joe Biden is the new President of the United States, period. And so it must be: there are no alternatives, either to the supposed devastating fury of a seasonal flu that caused the same number of deaths as last year, or to the inevitability of the election of a candidate who is corrupt and subservient to the deep state. In fact, Biden has already promised to restore the lockdown.

Reality no longer matters: it is absolutely irrelevant when it stands between the conceived plan and its realization. Covid and Biden are two holograms, two artificial creations, ready to be adapted time and time again to contingent needs or respectively replaced when necessary with Covid-21 and Kamala Harris. The accusations of irresponsibility thrown at Trump supporters for holding rallies vanish as soon as Biden’s supporters gather in the streets, as has already happened for BLM demonstrations. What is criminal for some people is permitted for others: without explanations, without logic, without rationality. The mere fact of being on the left, of voting for Biden, of putting on the mask is a pass to do anything, while simply being on the right, voting for Trump or questioning the effectiveness of masks is sufficient reason for condemnation and an execution that does not require any evidence or a trial: they are ipso facto labeled as fascists, sovereignists, populists, deniers – and those labeled with these social stigmas are supposed to simply silently withdraw.

We thus return to that division between good people and evil people, that is ridiculed when it is used by one side – ours – and conversely held up as an incontestable postulate when used by our adversaries. We have seen this with the contemptuous comments responding to my words about the “children of Light” and the “children of darkness,” as if my “apocalyptic tones” were the fruit of a ravingly mad mind and not the simple observation of reality. But by disdainfully rejecting this Biblical division of humanity, they have actually confirmed it, restricting to themselves alone the right to give the stamp of social, political, and religious legitimacy.

They are the good ones, even if they support the killing of the innocent – and we are supposed to get over it. They are the ones supporting democracy, even if in order to win elections they must always resort to deception and fraud – even fraud that is blatantly evident. They are the defenders of freedom, even if they deprive us of it day after day. They are objective and honest, even if their corruption and their crimes are now obvious even to the blind. The dogma that they despise and deride in others is indisputable and incontrovertible when it is they who promote it.

But as I have said previously, they are forgetting a small detail, a particular that they cannot understand: the Truth exists in itself; it exists regardless of whether there is someone who believes it, because the Truth possesses in itself, ontologically, its own reason for validity. The Truth cannot be denied because it is an attribute of God; it is God Himself. And everything that is true participates in this primacy over lies. We can thus be theologically and philosophically certain that these deceptions’ hours are numbered, because it will be enough to shine light on them to make them collapse. Light and darkness, precisely. So let us allow light to be shed on the deceptions of Biden and the Democrats, without taking even one step back: the fraud that they have plotted against President Trump and against America will not remain standing for long, nor will the worldwide fraud of Covid, the responsibility of the Chinese dictatorship, the complicity of the corrupt and traitors, and the enslavement of the deep church. Tout se tient [Everything fits together].

In this panorama of systematically constructed lies, spread by the media with a disturbing impudence, the election of Joe Biden is not only desired, but is considered indispensable and therefore true and therefore definitive. Even though the vote counts are not completed; even though the vote verifications and recounts are only just beginning; even though the lawsuits alleging fraud have only just been filed. Biden must become President, because they have already decided it: the vote of the American people is valid only if it ratifies this narrative – otherwise, it is “reinterpreted,” dismissed as plebiscite drift, populism, and fascism.

It is therefore not surprising that the Democrats have such coarse and violent enthusiasm for their candidate in pectore, nor that the media and the official commentators have such uncontainable satisfaction, nor that political leaders from around the world are expressing their support and sycophantic subjection to the deep state. We are watching a race to see who can arrive first, elbowing and sprawling to show off, so that they can be seen to have always believed in the crushing victory of the Democratic puppet.

But if we understand that the sycophancy of world heads of state and party secretaries is simply a part of the trite script of the global Left, we are frankly left quite disturbed by the declarations of the United States’ Conference of Catholic Bishops, immediately republished by Vatican News, which with disturbing cross-eyedness credits itself with having supported “the second Catholic President in the history of the United States,” apparently forgetting the not-negligible detail that Biden is avidly pro-abortion, a supporter of LGBT ideology and of anti-Catholic globalism. The Archbishop of Los Angeles, José H. Gomez, profaning the memory of the Cristeros martyrs of his native country, says bluntly: “The American people have spoken.” The frauds that have been denounced and widely proven matter little: the annoying formality of the vote of the people, albeit adulterated in a thousand ways, must now be considered to be concluded in favor of the standard-bearer of aligned, mainstream thought. We have read, not without retching, the posts of James Martin, S.J., and all those courtiers who are pawing to get on Biden’s chariot in order to share in his ephemeral triumph. Those who disagree, those who ask for clarity, those who have recourse to the law to see their rights protected do not have any legitimacy and must be silent, resign themselves, and disappear. Or rather: they must be “united” with the exultant choir, applaud and smile. Those who do not accept are threatening democracy and must be ostracized. As may be seen, there are still two sides, but this time they are legitimate and indisputable because it is they who impose them.

It is indicative that the U.S. Conference of Catholic Bishops and Planned Parenthood are both expressing their satisfaction for the presumed electoral victory of the same person. This unanimity of consensus recalls the enthusiastic support of the Masonic Lodges on the occasion of the election of Jorge Mario Bergoglio, which was also not free from the shadow of fraud within the Conclave and was equally desired by the deep state, as we know clearly from the emails of John Podesta and the ties of Theodore McCarrick and his colleagues with the Democrats and with Biden himself. A very nice little group of cronies, no doubt about it.

With these words of the USCCB the pactum sceleris [plot to commit a crime] between the deep state and the deep church is confirmed and sealed, the enslavement of the highest levels of the Catholic hierarchy to the New World Order, denying the teaching of Christ and the doctrine of the Church. Taking note of this is the first, imperative step in order to understand the complexity of the present events and consider them in a supernatural, eschatological perspective. We know, indeed we firmly believe, that Christ, the one true Light of the world, has already conquered the darkness that obscures it.

American Catholics must multiply their prayers and beg the Lord for a special protection for the President of the United States. I ask priests, especially during these days, to recite the Exorcism against Satan and the apostate angels, and to celebrate the Votive Mass Pro Defensione ab hostibus. Let us confidently ask for the intervention of the Blessed Virgin Mary, to whose Immaculate Heart we consecrate the United States of America and the entire world.

Viganò: America is in midst of ‘colossal electoral fraud,’ we must pray NOW to defeat enemy