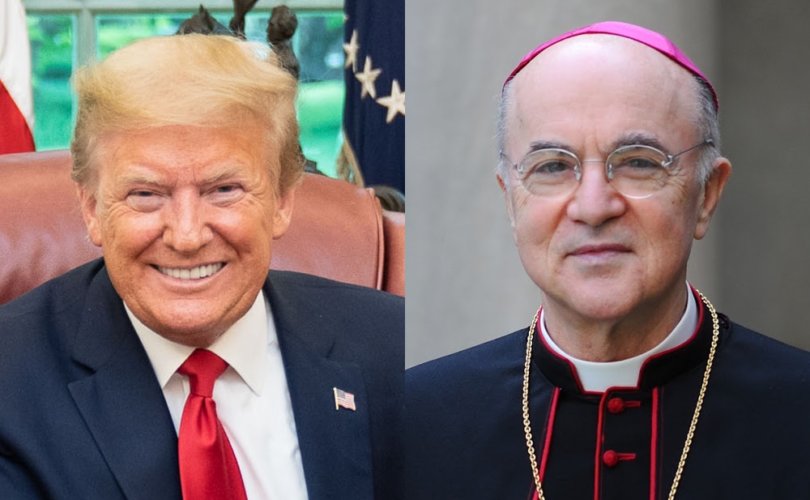 Editor’s Note: The following is a note the Archbishop Carlo Maria Viganò sent to the National Catholic Prayer Breakfast, which was held today. The event organizers declined to read it aloud at the event, which this year took place online. LifeSiteNews publishes it in full below.

September 23, 2020 (LifeSiteNews) – With deep emotion I have learned that President Donald J. Trump will be taking part in the National Catholic Prayer Breakfast on 23 September.

On this occasion, Attorney General William Barr will receive the NCPB’s Christifideles Laici Award (Christ’s Faithful Laity), named after the Apostolic Exhortation On the Laity by Pope John Paul II.

I would like to make myself present on this memorable occasion, in which I participated with great enthusiasm as Apostolic Nuncio during the years of my mission in Washington, D.C. (2011-2016).

I therefore join all the participants in this extraordinary celebration and all American Catholics, who see in President Donald Trump the greatest defender of the supreme values of Christian civilization: of life, from conception to natural death; of the natural family composed of one man and one woman and children; and of love for the homeland: One Nation under God! And, most importantly, he stands for defending the right to freely practice our Faith, thus allowing us more fully to honor God.

The presidential elections in November represent an epochal challenge, a biblical challenge, the outcome of which will be decisive not only for the United States of America but for the whole world.

It is necessary that all of you Catholics of America are well aware of the role that Providence has deigned to entrust to your President, and that you are aware of the extraordinary battle that He is preparing to fight against the demonic forces of the deep state and against the New World Order. I am at your side with fervent prayer, together with millions of Catholics and with all people of good will throughout the world.

Our trust rests in God, the Almighty, whose right hand always works wonders.