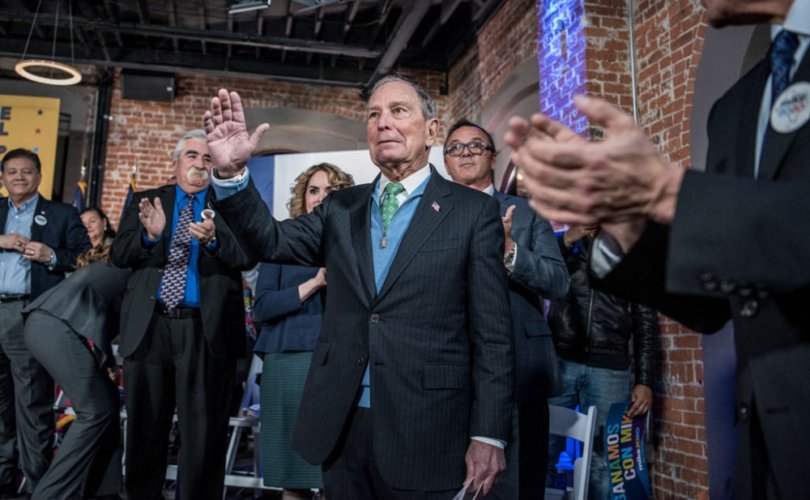 February 19, 2020 (American Thinker) — The inevitable cratering of Joe Biden's campaign, accelerated by the impeachment fiasco orchestrated by Nancy Pelosi and the inexorable rise of Bernie Sanders, has caused the Ruling Class to turn their lonely eyes to a hoped-for savior, Michael Bloomberg. But along with Bloomberg comes his de facto business partner and longtime close ally: China, a nation determined to destabilize American security, prosperity and freedom while growing more tyrannical and secretive internally and more dangerous than ever externally as it faces a potential economic and societal cataclysm.

In a September 2019 interview with PBS's Firing Line, Bloomberg said: “The Communist Party wants to stay in power in China and they listen to the public.” Further, “Xi Jinping is not a dictator. He has to satisfy his constituents or he's not going to survive.”

Bloomberg failed to mention that in 2013, Bloomberg News was caught in a scandal when it killed news stories revealing corruption related to Xi Jinping's family members, prompting various reporters and editors to resign. It turned out that Bloomberg News leadership told the editors that stories about the families of politburo members were off limits.

When challenged by host Margaret Hoover of PBS on whether he really believes that Xi is “responsive” to the democratic will of the people, Bloomberg doubled down. “The Chinese Communist Party looks at Russia and they look for where the Communist Party is and they don't find it anymore. And they don't want that to happen. So, they really are responsive.”

These absurd statements fly in the face of the what is happening in Xinjiang province with the forced imprisonment of nearly 2 million Uighur Muslims in “re-education” camps. The government crackdown on the citizens of Hong Kong continues, as well as the closing of innumerable Christian churches, jailing pastors, and even rewriting Scripture. (Additionally, nearly 500,000 individuals are currently detained in “Black Jails” and mental health institutions without trial, charges, or access to legal aid. Most recently, video has surfaced of the government's reaction to the coronavirus by physically dragging victims or potential victims of the virus kicking and screaming into expansive state pens.)

Michael Bloomberg, in pursuit of power and riches, has refused over the past 25 years to acknowledge these abuses and threats by China to world peace and stability.

As Josh Rogin of the Washington Post points out, among the ways Michael Bloomberg and his company Bloomberg LP make a considerable amount of money in China is not only through the extraordinarily profitable licensing of its financial software, but via its massive Bloomberg Barclays Global Aggregate Bond Index. Bloomberg LP is helping finance Chinese companies by sending billions of U.S. investor dollars into the Chinese bond market.

In 2019, the index began a 20-month plan to support 364 Chinese firms by directing an estimated $150 billion into their bond offerings, including 159 controlled directly by the Chinese government. Bloomberg, along with other Wall Street firms, is effectively supporting the Chinese government's human rights abuses and its resistance to Donald Trump's efforts to rein in Chinese trade exploitation and espionage, all the while exposing American investors to increased risk in a nation that habitually obfuscates its economic statistics and manipulates its currency.

What are those risks currently?

On the 15th of February, Tyler Durden at ZeroHedge wrote:

In our ongoing attempt to glean some objective insight into what is actually happening “on the ground” in the notoriously opaque China, whose economy has been hammered by the Coronavirus epidemic, yesterday we showed several “alternative” indicators such as real-time measurement of air pollution (a proxy for industrial output), daily coal consumption (a proxy for electric usage and manufacturing) and traffic congestion (a proxy for commerce and mobility, before concluding that China's economy appears to have ground to a halt.

That conclusion was cemented after looking at some other real time charts [infrastructure and fixed asset investments, passenger traffic and real estate sales] which suggests that there is a very high probability that China's GDP in Q1 will not only flatline, but crater deep in the red for one simple reason: there is no economic activity taking place whatsoever.

In a nation of 1.4 billion people, perhaps the most catastrophic and ominous factor is the soaring prices for everyday staples such as food, as the internal supply chain frays and the economy craters. Additionally, these setbacks may well be the catalyst for a nationwide eruption of the social unrest that has been festering below the surface for the past decade. Would a President Bloomberg with so many ties to a potentially desperate and belligerent China, and subject to potential extortion, act in the best interest of the United States?

The myriad conflicts of interest that Donald Trump has been falsely accused of over the past four years pale in comparison to the potential conflicts of Michael Bloomberg, particularly with regard to America's primary global adversary, China. Further, on a daily basis, new stories emerge concerning his tyrannical management style, egocentrism, racial insensitivity, and overt sexism — all factors that should be determinative in disqualifying anyone for a major political party presidential nomination.

Nonetheless, the Ruling Class, desperate to rid themselves of the dual existential threat to their hegemony, Donald Trump and his America First Movement and Bernie Sanders and his Democratic Socialism, are coalescing behind Michael Bloomberg. He is willing to buy not only the American presidency, but the Ruling Class's loyalty and endorsements. And many are willing to sell. If there is any doubt that power and money motivate the American Ruling Class, thanks to Michael Bloomberg, that doubt will now be put to bed.