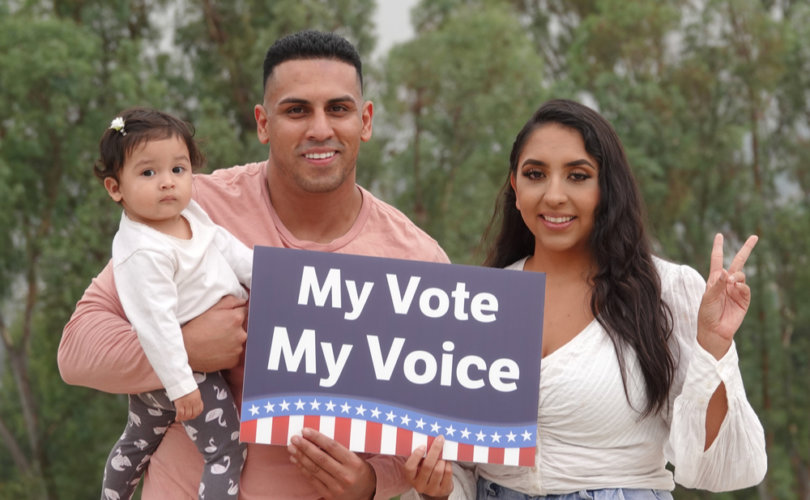 But the problem for the donkeys is that Hispanic voters are not reacting as predicted by those who think minority status automatically means the consciousness of being an oppressed victim in need of rescue by the statists. In 2020, Biden got 61 percent of the Hispanic vote, while Trump increased his share 8 points over 2016. That trend line of Hispanics migrating over to the GOP appears to have continued with the election last Tuesday.

Per @FoxNews Voter Analysis, #Youngkin got 54% of #Latino vote in #VAgov election. If true, this is a major story & shows beginning of shift in the Hispanic vote towards #GOP, despite continued assurances from Dems & Latino liberal groups that Dems have hold on Hispanic vote.

The woke revolution has stalled. https://t.co/xABg1V1eqp

This clip from Virginia will become the subject of nightmares. (via @TelemundoNews) pic.twitter.com/BAYnWLvEa2

That’s right: Hispanic immigrants came to this country for economic opportunity, and they and their American-born descendants see Democrat policies as truncating those opportunities.

Down in border state Texas, a runoff race for the state House of Representatives in a San Antonio district that is about 75% Hispanic saw another big GOP victory, shattering the idea that Hispanic voters “belong” to the Democrats.

South Texas is ready for new leaders who finally stand up to protect the citizens they serve. pic.twitter.com/RLVtd52hP3

The New York Times profiles another migrant to the GOP:

Growing up in a working-class neighborhood in San Antonio, Adolfo Chagoy had long supported local and national Democrats who touted job growth and infrastructure projects.

But last week, as he stood in line to cast a ballot in a tightly contested runoff election for a State House seat, Mr. Chagoy thought instead about the issues he had come to care about more recently, such as strengthening the border, funding police departments and banning abortion. And so he checked the box for the Republican candidate, John Lujan, who narrowly emerged the winner on Tuesday to represent the city’s South Side and state’s 118th District.

“The thought has always been, ‘I’m poor, and if you are poor you can’t be a Republican,'” said Mr. Chagoy, a 66-year-old retired cook. “I don’t think you can buy values. I voted for the issues I care about, not about who’s from what party.”

Mr. Chagoy’s vote helped flip a once reliable Democratic bastion by 286 ballots in a runoff for a special election. Four of his five children, also longtime Democrats, also switched parties, choosing not to endorse 27-year-old Frank Ramirez, a Democrat and former legislative aide.

It is hard to overstate the importance of the trend of Hispanic voters leaving Democrats for Republicans. The party leadership is in the hands of White, educated leftists, whose concerns are ideological and esoteric compared to the concerns of most Hispanics. Consider the label “Latinx,” which is insisted upon by those educated leftists and rejected by an overwhelming share of Hispanics.

Hispanic voters tend to be more oriented to church, family, and traditional sex roles than the Democrats’ revolutionary vanguard. Such values inspire contempt in the rarefied heights of politically correct elites.

The condescending view of Hispanics as a helpless racial minority is insulting and is being seen as such by more and more people who identify as Hispanic.