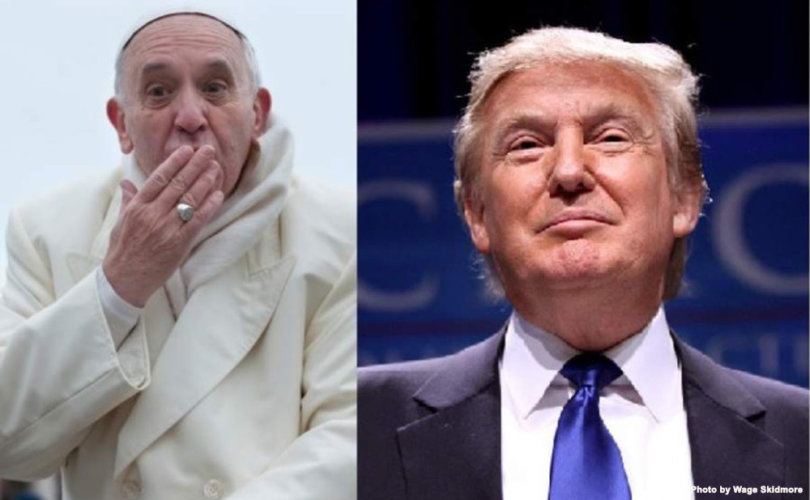 February 20, 2017 (Stream.org) — Media are positively frothing with stories suggesting a showdown between President Trump and Pope Francis, with conservative Catholics worldwide (but especially in America) as the prize that the two leaders will fight over.

Here’s a piece from NBC that pretends that a theological satire by wearied faithful Catholics in Rome of the pope’s increasingly Progressive newspaper, L’Osservatore Romano, is an instance of politicized “fake news.” You know, the kind of conservative news and opinion pieces from sources like Breitbart that the European Union, Google, Facebook, and Angela Merkel are scrambling to censor.

Next we see a much more ambitious story — a frenzied conspiracy theory peddled by the Washington Post,suggesting that Donald Trump and his Catholic chief strategist Steve Bannon are working behind the scenes to thwart Pope Francis, conspiring with theological conservative Cardinal Raymond Burke — a canon lawyer who shows little interest in politics, but is deeply worried by Pope Francis’ programmatic muddling of Catholic teaching on the sanctity of marriage. Here’s a sample of the fevered rhetoric featured by a once-great newspaper:

Pope Francis needs to take tougher action against the United States’ most influential Catholic in Rome, Cardinal Raymond “Breitbart” Burke. The renegade cleric is not only undermining Francis’s reformist, compassionate papacy, and gospel teaching as it applies to refugees and Muslims, but the rebel prince of the church is also using his position within the walls of the Vatican to legitimize extremist forces that want to bring down Western liberal democracy, Stephen K. Bannon-style. Simply put, the Vatican is facing a political war between the modernizing Pope Francis and a conservative wing that wants to reassert white Christian dominance. …

[T]he virulently anti-Islam (“capitulating to Islam would be the death of Christianity”), migrant-phobic,  Donald Trump-defending, Vladimir Putin-excusing Burke is unrepentant and even defiant, continuing to preside over a far-right, neo-fascist-normalizing cheer squad out of the Holy See.

The author goes on to compare Donald Trump to Hitler, and Cardinal Burke to clerics who allegedly curried favor with Mussolini. I would debunk this sophomoric jeremiad point by point, except that Christian Browne of OnePeterFive has already done so. Go read it here.

Bannon and Burke: Two Catholics on the Firing Line

What makes the Post’s scenario even mildly plausible is one key fact that Bannon and Burke have in common: Each is a Catholic unjustly maligned and targeted for professional destruction by forces of the left for defending legitimate principles that are grounded in reason and faith.

Read Bannon’s speech at the Vatican in 2014 to see that the moderate nationalism and patriotic populism he champions have nothing in common with extremist “alt-right” or racialist worldviews. In fact, what drives the left almost literally to madness about Bannon is that (like Trump, whom he serves) he is highly effective at repackaging and selling mainstream patriotic conservatism — which they consider immoral and contemptible, worth censoring via campus riots and death threats. Go back and read papers from the 1980s to see how much such people hated Ronald Reagan, with the same level of frenzy and for exactly the same reasons.

Cardinal Burke is likewise hated by leftists inside the Catholic church and out because he calmly, firmly, and soberly repeats the timeless teaching of Christ on issues where the world is desperate to silence it — especially on the sanctity of marriage and of life. Secularists at the Washington Post and Catholic collaborators with our progressive persecutors are outraged that such a man is permitted to speak. They hate him more than Milo Yiannopoulos. They hate him the way Garry Wills hated St. John Paul II.

No, there is no behind-the-scenes cabal of conservative Catholics coordinating with the White House, trying to use the power of the U.S. presidency to thwart Pope Francis’ agenda.

Such a movement would not represent a secular intervention in the internal governance of the Catholic Church — not even the Washington Post is suggesting that President Trump is planning to depose Francis and appoint an antipope. No, such an effort would be aimed squarely at rallying Catholics faithful to the Church’s real teachings on morality, to help stand up for its real teachings on economics and politics. Pope Francis’ loose lips and sloppy thinking threatens both.

It’s true that the pope has overstepped his authority — which is why four eminent cardinals risked their standing and their careers to challenge his 2015 statement on Catholic marriage. It also is the task of Catholic laymen to challenge Francis’ statements on politics, even at the peril of losing their jobs. The Church itself teaches that laymen, not bishops and priests, are the people called by God to interpret and apply the general principles of morality, justice and prudence that the Church has laid down over the centuries. Those principles are grouped together under the title Catholic Social Teaching, a rich, complex, but often misinterpreted tradition which I explain here, if you’re interested.

For priests to try to micromanage public policy is as misguided as it would be for U.S. senators to start issuing catechisms and redesigning vestments. Yet for decades the U.S. Catholic bishops conference has been issuing detailed programs of public policy, which some Catholics understandably think bear the authority of the Church. They don’t. Apart from starkly obvious issues like the evil of abortion, even popes do not have the power to bind a Catholic’s conscience at such a level of detail — especially when what they’re saying departs from the letter and spirit of the Church’s own Catechism, as Pope Francis’ views on immigration clearly do.

Want Borders? You’re “Not a Christian”

Pope Francis’ statements on other subjects, from climate change to economics, include departures from traditional Catholic teaching, or gross overreaches of his legitimate authority

If there is a clash between the pope and the president, between ambitious clergy and patriotic Catholic citizens, we know who started it.

Pope Francis threw down the gauntlet during the presidential primaries, suggesting that the Protestant Trump was not even a Christian for wanting to enforce our country’s immigration laws. That intervention backfired, to the point that Trump’s Catholic rivals, Jeb Bush and Marco Rubio, had to distance themselves from the pope’s remarks. Francis may well have helped Trump carry GOP primaries in the South. Some will attribute that “Francis effect” to residual anti-Catholicism, but that’s completely wrong-headed for two clear reasons:

Protestants didn’t insert anti-Catholic themes into American politics. In fact, evangelicals worked closely with faithful Catholics to keep life issues visible. The Pope inserted himself into an American election, overreaching his spiritual authority to judge the soul of a Protestant American.

Pope Francis was not even promoting the official Catholic teaching on immigration, which (as I prove here) is much closer to Donald Trump’s position than it is to the pope’s idiosyncratic view — which departs from 2,000 years of Catholic teaching and practice. Read The Stream’s “Open Letter” to Pope Francis begging him to correct his statements on this issue, and stop comparing conservatives worried about Muslim terror to the murderous Cain and King Herod.

Pope Francis’ statements on other subjects, from climate change to economics, include departures from traditional Catholic teaching, or gross overreaches of his legitimate authority — as I document in patient detail, with hundreds of footnotes to binding church documents, in my new The Politically Incorrect Guide to Catholicism.

The politicized priorities that have emerged in the Vatican represent a real threat to the church’s witness. When a Vatican conference can feature as honored speakers overpopulation cranks, one of whom (Paul Ehrlich) favors abortion and forced sterilization, you know that something is deeply and darkly wrong. If most clergy and bishops don’t feel free to stand up and speak, it’s the duty of laymen to do it.

Remember that it was ordinary Christians, not clergy, who resisted the Arian heresy — which a weak pope was letting run wild. It is even more our duty to push back in the sphere which God allocated us — the prudent application of rational public policy based on timeless Christian principles. At a time when the issue at hand is the mass colonization by Islamists of long-time Christian countries, including Italy, the stakes could not be higher.

This article was originally published on Stream.org and is re-published with permission.