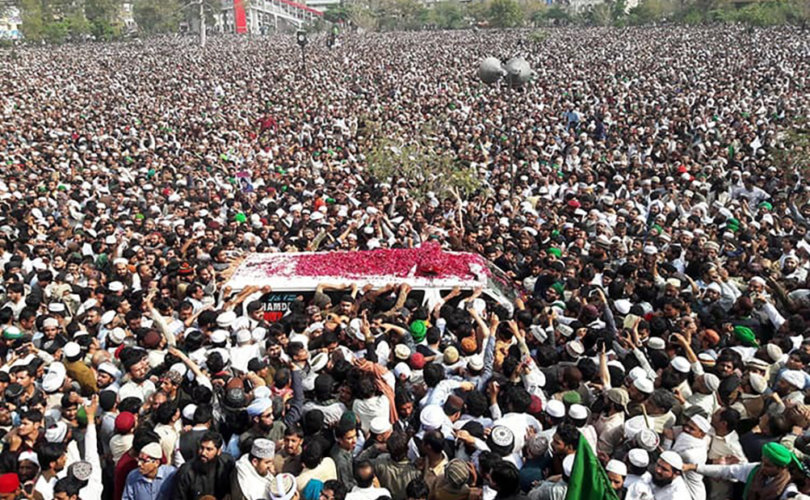 100,000 Pakistanis mourned death of man who assassinated governor Taseer for opposing Pakistan’s blasphemy law and working for the release of Asia Bibi, a Christian woman sentenced to death.

April 28, 2017 (The Catholic Thing) – It’s often said that the vast majority of Muslims are moderate. But as the newspapers like to remind us about other matters, this is asserted “without any evidence.” In fact, what evidence we do have suggests that it’s a dubious proposition.

Where, exactly, do all these moderate Muslims live?

Would it be in Chechnya where authorities have set up concentration camps for gays? And where 800,000 Muslims rallied in 2015 to protest the Charlie Hebdo Muhammad cartoons? Try to get that many Muslims together for an anti-ISIS rally.

Would it be in Pakistan where 100,000 turned out for the funeral of an assassin? The assassin had murdered an official who had called for an end to the blasphemy laws. Numerous Islamist groups warned people not to attend the official’s funeral or even to pray for his soul.

Would it be in Saudi Arabia where amputations are conducted on a regular basis in public squares and where public beheadings are not uncommon? The last time that something like that happened in the West was during the French Revolution.

How about the West Bank? In the West Bank, streets, parks, squares, and schools are named after “martyrs” who are honored for having killed Jewish men, women, and children. In the West Bank, it’s considered cute to dress up three-year-olds in suicide bomb belts. Meanwhile, in schools and on government-run television, children are taught that killing Jews is life’s highest calling.

Maybe Morocco? The home of Casablanca and Rick’s Café? Sorry. An ADL global survey found that 80 percent of Moroccans harbor anti-Semitic views. Which isn’t that bad when you compare it with Algeria (87 percent) and Iraq (92 percent).

Could the blessed land of moderation be Afghanistan? Only if you discount the tradition of child marriage and the popular form of entertainment called “bacha bazi.” The bacha bazi are teen and preteen boys who are dressed as girls, forced to dance for men, and are then passed around for sexual purposes. As for government, the hardline Taliban who once ruled Afghanistan are likely to rule it again. They can hardly be considered moderates. On the other hand, they did try to do away with the custom of bacha bazi.

Egypt? There must be moderates in Egypt. Well, yes, there are. Egypt’s leader, President el-Sisi, has called for a reformation of Islam, and there are others of like mind. On the other hand, a 2013 Pew public opinion poll of Egyptians found that 70 percent supported whipping and amputation for thieves, 81 percent supported stoning of adulterers, and 86 percent supported the death penalty for apostates. President El-Sisi has his work cut out for him.