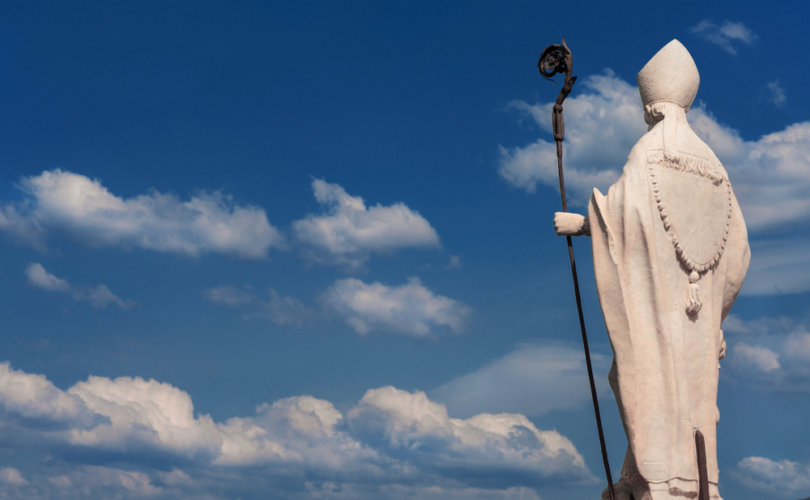 It was a clever comeback to Pharisee critics trying to maneuver Jesus into saying something about taxes which might discredit him in front of the people. But it reflected an important truth about the interplay between life and politics that’s as relevant today as it was in New Testament times.

The more involved you are with government, the less you’re free to act on your own principles. If you take Caesar’s coin, Caesar owns you, and pretty soon he’ll be demanding more than his due.

The Catholic Church finds itself in this situation currently.

A lot of people can’t understand why bishops haven’t taken steps to discipline certain key government officials who trumpet their supposed Catholic identity while acting with blatant disregard for Church teaching on issues of basic morality.

Questions have been raised about Nancy Pelosi, Joe Biden, an assortment of Kennedys, and other highly visible public figures who flout the Church with impunity. The latest is New York Governor Andrew Cuomo, who recently put his signature on the nation’s most radical abortion law.

'Why is Cuomo not being excommunicated?' they ask. And the fact is, he should be. But it’s not so easy a matter as it might seem.

Excommunication cannot be automatically imposed upon someone. The ultimate canonical penalty applies only in certain cases:

That last point is generally understood as applying to only the woman who undergoes an abortion, the medical practitioners directly involved in conducting it, or others who have actively encouraged the act (such as parents or a boyfriend who doesn’t want the child).

Under Canon Law (Canon 915, specifically), if someone is seriously offending against the teachings of the Church, a bishop may impose the penalty of not being able to receive Holy Communion. Likewise, Canon 1369 prescribes it for those who are actively hostile to the Faith.

As it happens, this penalty has already been imposed upon Cuomo — not for his promotion of abortion, but because he is living with a woman who is not his wife. So as far as we know, he isn’t currently receiving Holy Communion, which is a severe deprivation in itself.

More than barring him from the Eucharist, however, people want Cuomo excommunicated. His behavior has encouraged their demands. The governor claims that his faith is important to him, and he speaks fondly about his days as an altar boy. Yet he appears to have total disdain for Church authority.

Timothy Cardinal Dolan of New York has stated that he thinks it would be “counter-productive,” that it would only give ammunition to enemies of the Church who dismiss the abortion issue as merely “an internal Catholic disciplinary matter.” Interviewed on Fox News, the Cardinal observed that excommunicating Cuomo wouldn’t have the “medicinal” purpose for which the penalty is intended.

There are risks to the Church as well. Americans are enamored of the idea that Church and State are separated. But the truth is that up to 40 percent of Catholic charitable agency budgets is attributable to state and federal subsidies. Bishops worry about anything that can threaten the flow of those funds, impacting people who are the most vulnerable.

Add to that the legal jeopardy in which dioceses find themselves because of the sex abuse scandal. Adjustments have been made in several states to statutes of limitations so that expired abuse claims can be reinstituted.

Moreover, the possibility of bringing charges against the Church under the Racketeer Influenced and Corrupt Organizations Act (RICO) is being explored. It’s no surprise that diocesan lawyers advise against antagonizing political leaders who hold such possibilities over the heads of bishops.

Yet, the Church is charged with defending truth. Souls hang in the balance — not least the souls of those very politicians who defy the teachings that will determine their standing before God.

The Gospel warns us that we will always be persecuted, but that we have to do what’s right. And for too long the Church has been doing what’s wrong.

It’s time to turn that around. We must be willing to risk the loss of Caesar’s coin and even the prospect of Caesar’s wrath.

We must be willing to risk even the curtailment of our charitable programs. Preserving these efforts, vital as they may be, is not worth sacrificing the truth.

Because proclaiming truth is the Church’s ultimate mission.

Editor's note: A priest of the Diocese of Camden, New Jersey, Rev. Michael P. Orsi currently serves as parochial vicar at St. Agnes Parish in Naples, Florida. He is host of “Action for Life TV,” a weekly cable television series devoted to pro-life issues, and his writings appear in numerous publications and online journals.