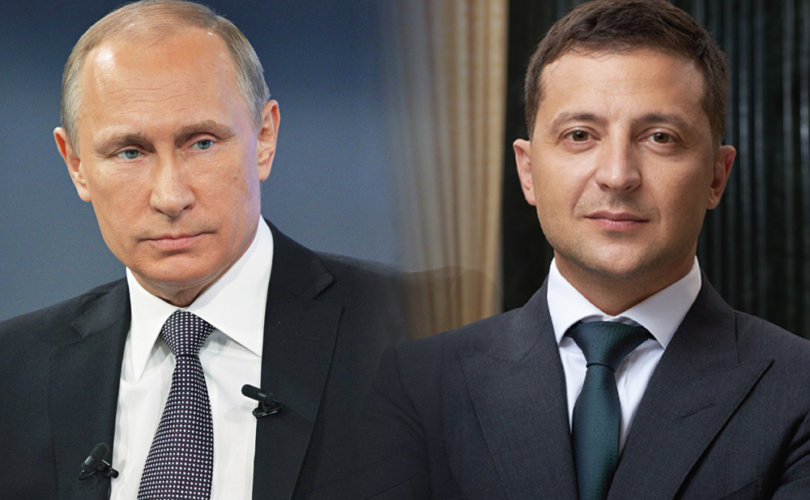 (LifeSiteNews) — The recent dramatic intensification of the conflict between Russia and Ukraine has once again led much of the global population to try to intellectually grapple with a subject about which they previously knew very little. Just as we experienced with the onset of the COVID crisis – when many of us attempted to get some sort of understanding of difficult scientific and medical concepts we had until then neglected – in recent weeks many of us have found ourselves thinking through challenging questions about the political situation in Eastern Europe. Others have naturally been focusing on attempting to understand the key moral questions related to a conflict which has resulted in a major humanitarian crisis.

In this article we wish to focus on different, but related questions. Before Western media fixed its attention on the war between Russia and Ukraine, what else was happening in the domestic and foreign policies of the countries themselves? Who are Volodomyr Zelenskyy and Vladamir Putin? What were these men doing before they began receiving the intense focus of the world’s media? Were they – similar to the Biden administration and many other governments around the world – waging a kind of war upon their own people through tyrannical COVID restrictions?

Were they waging a war on preborn children though policies which either promote or tolerate abortion? Were they acting as leaders concerned primarily for the good of the people of their nation, or were they advancing a “globalist” agenda contrary to the interests of their people? In this article we will present evidence related to these and many similar questions.

Many readers of LifeSiteNews will recognise numerous traits of what they think of as a typical globalist in Zelenskyy. For one thing, the Ukrainian President is a darling of the liberal media and has been receiving the most extraordinary praise from people whom many would consider confirmed globalists. Just yesterday U.S. Speaker of the House Nancy Pelosi read a poem written by U2 front-man Bono which compared Zelenskyy to St. Patrick, which was met with “criticism and general bafflement” in Bono’s native Ireland.

Putin, on the other hand, has been demonized for years by the liberal media, who appear to hate him. He is often thought of as a nationalist and someone whose primary – and perhaps only – concern is his native Russia.

Some even consider Putin to be an “anti-globalist.” But do his actions consistently fit with such an idea? It is not the purpose of this article to prove that Putin is a globalist, but to provide the evidence that the term, at least as it is understood by many, fits with many of his actions.

A key portion of the globalist agenda is the promotion, acceptance, and actioning of the UN’s 2030 Sustainable Development Goals (SDG), which are pro-abortion and heavily promote a green agenda “to combat climate change.” As outlined by the United Nations’ themselves when promoting their pro-abortion 2030 Agenda, “Gender equality lies at the heart of the 2030 Agenda.”

Alliance with the globalist cause is thus found in promotion of their key tenets – LGBT ideology, climate change policies, abortion, and global governance. Such aspects are also found as key elements of Klaus Schwab’s Great Reset, pushed by his World Economic Forum (WEF). Many of these policies are supported by both Putin and Zelenskyy, as evidenced below.

Promotion of LGBT agenda and ideology

Some will have been surprised to have seen Vladimir Putin named alongside political leaders such as Justin Trudeau and Emmanuel Macron, by Klaus Schwab in a 2016 video which recently went viral, where the WEF chief boasted of “penetrating the cabinets” of governments around the world with his WEF young global leaders.

“So we penetrate the cabinets”.

Some will have heard that in response to the conflict in Ukraine, a spokesperson for Schwab’s WEF announced that the organization has “frozen all relations with Russian entities.” But is such an event evidence that Putin is opposing Schwab’s agenda? Of course not.

Most significantly, it hardly erases the numerous occasions listed above where Putin has taken significant actions in support of the same agenda pursued by Schwab. And moreover, we would ask anyone who would point to such an example as evidence that Putin is an anti-globalist if they really believe that these men, who are amongst the most powerful men on earth, aren’t capable of a little political theatre?