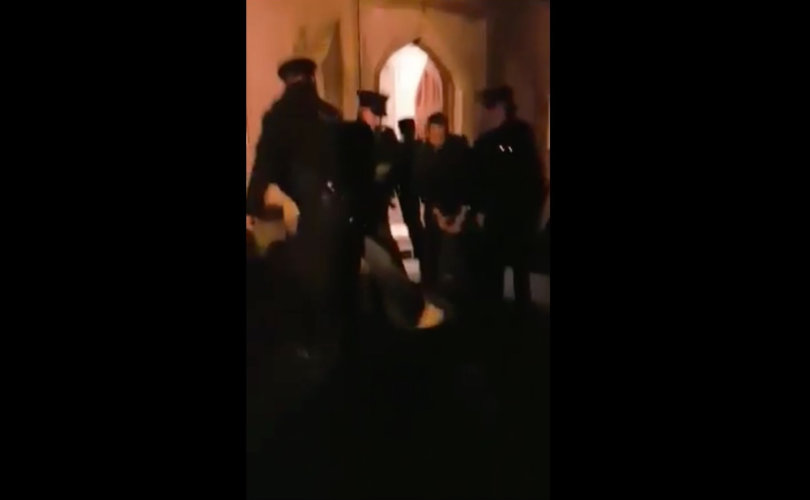 Screengrab from Youtube video showing police dragging a man from St. Patrick's Cathedral in Armagh as he prays for the unborn on the eve of Ireland's new abortion regime.

January 7, 2019 (LifeSiteNews) – 2018 was the year that saw the Irish Referendum on abortion passed with cheering crowds on the streets of Dublin and elsewhere.

As the Feast of the Holy Family drew to a close on December 30, armed police at the request of the local clergy forcibly dragged an Irish pro-lifer from a Catholic cathedral. Seemingly, his crime was wanting to pray through the night in that cathedral as an act of reparation for the liberal abortion law about to be enacted in Ireland.

The cathedral in question was St. Patrick’s Cathedral in Armagh. That city is the ecclesiastical capital of Ireland. It is reputed to be the site of St. Patrick’s main church that, according to tradition, was founded there in the year 457. It is the historic centre of Christianity in the island.

As with many such incidents today, there is video footage of the man being dragged from the cathedral by armed police. On this occasion, however, the police officers involved seem only embarrassed by what they were asked to do by the cathedral authorities. In the video the detained man is peaceful and clearly intent on doing nothing more than praying for his country and the generations about to be slaughtered as a result of the Republic’s new abortion law. He says as much to the police officers. Nevertheless, he is told he is under arrest and will be taken to a nearby police station, with the inevitable court appearance soon to follow.

2018 was a dismal year for Ireland. These desperate images seem to capture that year’s tragedy anew and how some have their priorities back to front. As the year ended, and the clock ticked down to the implementation of a new abortion regime in Ireland, one would have thought that the cathedral, that for so many represents the heart of Irish Catholicism and is the see of the Primate of All Ireland, the Archbishop of Armagh, could have stayed open on this night of all nights to pray for the unborn and for the Irish nation to once more regain its moral compass.

The cathedral is named in honour of St. Patrick. In establishing Christianity he drove out the pagan barbarism then prevalent throughout the island. Tradition has it that, each Spring, druids held their occult festival on the Hill of Slane in the centre of Ireland. It was there, that the druid fire was lit. This fire was the only one permitted in Ireland at that moment. It symbolised not just a religious order but a temporal one, too, with the druid pagan religion at its core. That fire was also a fire for human sacrifice lit to pacify the gods whom the druids and the pagan Irish worshipped.

In the teeth of druidic opposition, and like Elijah of old on Mount Carmel before the prophets of Baal, St. Patrick ascended the Hill of Slane and started a different fire. In the end, it proved to be a fire that brought the light of Truth to the Irish and, subsequently, not only converted a nation to Christianity but also ended both human slavery and the barbaric human sacrifices then practised.

However dimly, there is something in this history echoed in that poor man’s protest last Sunday night. While others were keen to get to their beds and, no doubt sleep soundly through the night, this man wanted, needed, to pray for the unborn, sensing the evil about to be unleashed once more upon the people of Ireland as they enter into a new form of slavery.

The heavy-handed approach of calling the police, meted out by church authorities to this peaceful penitential pilgrim, is alarming to say the least. Sadly, it was not altogether unexpected in light of the new fires currently being lit across Ireland and the lack of resolve on the part of some to counter these neo-pagan “bonfires”.

If what is left of Christian Ireland does not perceive the real danger in its midst and act with all the spiritual means at its disposal to counter that threat, then in those same flames the last remnants of the faith will perish as surely as the children who are now once more to be sacrificed to demons – demons who have returned to Irish shores to be enthroned again as gods.