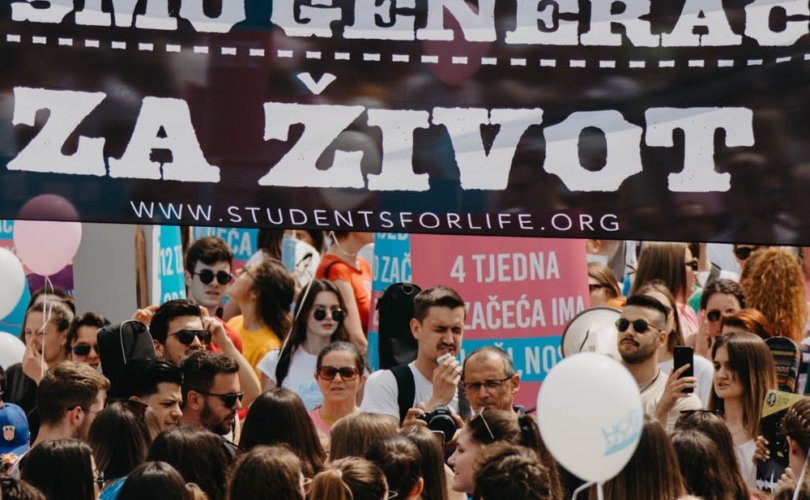 'We are the pro-life generation'; March for Life, ZagrebVigilare

(LifeSiteNews) — The seventh annual March for Life in the Croatian capital Zagreb came amidst an aggressive pro-abortion campaign that has been carefully planned and promoted by leftist politicians and Croatian mainstream media.

Croatia has an abortion law which allows for the legal killing of the unborn up until the tenth week of pregnancy.

This, though, is not enough for the pro-abortion woke left in Croatia which has over the past couple of weeks carefully orchestrated a national campaign using a woman (Mirela Cavajda) pregnant with a six-month-old boy who, due to an alleged tumor on her baby, has sought an abortion.

No Croatian hospital or doctor, though, is willing to do the procedure. It would involve sticking an injection of potassium chloride or digoxin into the baby’s heart causing a heart attack and then gruesomely ripping apart the baby and sucking out the remaining elements of the body.

Instead, the grisly procedure will be performed in a hospital in neighbouring Slovenia. Whereas over 60 percent of Croatian gynecologists have said they refuse to perform abortions, the number of such pro-life gynecologists in Slovenia is only 3 percent.

Even though mothers who have gone through similar situations and given birth to their sick babies have tried to contact Mrs. Cavajda to support her, the mother, a yoga instructor, has rejected all such appeals.

Leftist parliamentarians have called for a change in the abortion law to increase the number of weeks of gestation for legal abortions and have sought for the legally permitted conscientious objections of gynecologists to be prohibited, thereby forcing them to kill the unborn. The weak conservative government has for the moment thrown off all such suggestions, but at the same time is not willing to change the existing communist abortion law originating from 1978.

However, thousands of pro-life Croatians, mostly young people, went into the streets of Zagreb on Saturday, May 14, to celebrate unborn life and call for changes in law that would completely prohibit abortion in the mostly Catholic country. The Catholic Church in Croatia, although not directly involved in organizing the Marches for Life which take place throughout Croatian cities and towns in May and June, gives its tacit and moral backing to the Marches and the whole pro-life movement.

In a direct answer for calls to kill and dismember the allegedly sick six-month-old unborn baby, pro-life mother Tea Bekavac gave public witness to the participants of the March of how she also had a unborn child diagnosed with a malignant illness. She stated that as a mother she did not have the option of choosing not to give birth. She gave birth, and her baby girl lived on for two and half months. All Croatian media reported this testimony as well as the fact that pro-life Slovenians who are against “abortion tourism” in their country were also present at the Zagreb March.