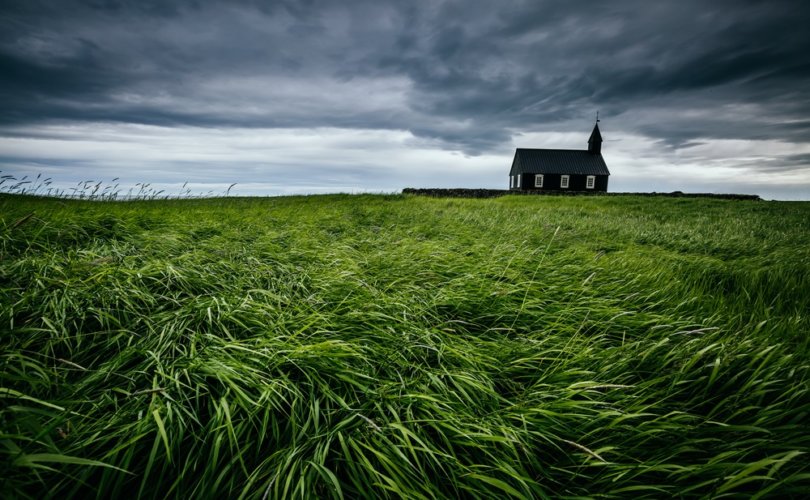 March 9, 2020 (American Thinker) — Pundits of all political stripes are taking note of the fact that the 2020 election is bringing to the fore just how deep and bitter are the cultural divisions within our nation. The glaring decline in political comity rivals that of the days leading up the Civil War. While the political divide is obvious and bitter, the growing religious divide is also increasingly obvious, and, perhaps, this development has been a stronger factor in the social and cultural divisions of the American public than has been previously acknowledged.

It has been little noted in the mainstream media, but the percentage of American adults who identify as non-Christian — those individuals who are labeled “none” in terms of religious identification — “continues to change at a rapid pace,” according to the Pew Research Center after its telephone interviews in 2018 and 2019. Most recently, “65% of American adults describe themselves as Christians — down 12 percentage points over the past decade.” Fully “17 percent of Americans describe their religion as 'nothing in particular' — up from 12% in 2009.” In sum, non-Christian religious affiliations are growing as a share of the adult population. Not surprisingly, Americans also say “religion is losing influence in American life.” Although most adults think private religious observance is a good thing, nearly two thirds think the church should stay out of political matters.

Though not made an issue by the legacy media, the decline in Christian and patriotic influence has been evident in the recent primary campaign events for the Democrat party. The televised Democrat debates showed no American flags. Social media, on the other hand, pointed out that, appallingly, the flags were intentionally removed to avoid offending anyone. Democrats and the various fact-checking sites responded to this criticism by pointing out that red, white, and blue flag colors and the stars and stripes imagery were everywhere and that some candidates wore flag lapel pins. But the basic fact of this departure from longstanding political tradition remains: no actual American flags were on the stage with the candidates.

Another telling sign of the shifts that are happening manifests itself in the fact that some “43 percent of Americans say socialism would be a good thing for the country.” As Kay James, president of the Heritage Foundation put it, “[t]he rising tide of socialism in America is reaching a critical point as more Americans warm up to the idea of bigger, more intrusive government.” Who would have dreamed that a whole-hearted socialist — actually a closet communist — Bernie Sanders, would be a viable option for the Democratic presidential nomination? Who would have dreamed that Sanders would praise a murderous communist dictator like Fidel Castro or that he would dodge the question when he was asked if Venezuelan president Nicolás Maduro is a dictator?

Byron York argued that the cultural divide goes deeper than the signs and symbols of patriotism; he notes several small indicators from the Bernie Sanders rallies that indicate a departure from typical campaign rallies: the absence of the Pledge of Allegiance; lack of an invocation; and an obviously “woke progressive crowd,” where disdain for the stories of American history is common, where military service is ignored, and where 36% say they “never” go to church. Byron's assessment? Democrat rallies are not a place where you get a “recite-the-pledge, hand-over-the-heart kind of feeling.” Moreover, hand-in-hand with the desertion of patriotic themes, we are seeing virulent anti-religious bias from all the candidates. Perhaps it might be clearer to say there is greater and greater open hostility toward anyone who holds to a traditional understanding of Judeo-Christian moral teaching.

More and more, in America, “emergencies are declared on a moral basis: people are suffering their newly discovered rights are being denied,” and suddenly, all the Democrat candidates support abortion as “reproductive rights” or “women's rights.” Joe Biden says he will “force Christians to pay for abortions.” Former presidential candidate Pete Buttigieg quotes the Bible to “justify late-term abortion” and declares that his Christian beliefs are the foundation of the “morality” of LBGT concerns; he decries the “homophobic bigotry” of those whose religious-right beliefs make them “harm other people.”

During the Obama years, 2008–2016, we heard the president declare, “We are not a Christian Nation” and that America is not a “Judeo-Christian nation.” But even cursory knowledge of our nation's history makes it clear that we were founded on Judeo-Christian principles and values and that our citizens have been and for the most part remain respectful of those historic Christian beliefs and moral teachings. The erosion of Christian influence in the public square is having a profound influence on all aspects of American life. Joe Biden recently said: “Let's be clear: transgender equality is the civil rights issue of our time.” Our kindergarteners are “being taught about gender fluidity,” and pre-school children at public libraries are “entertained” by drag queens. If we fail to assent to this hijacking, we are considered “bigots!”

Over the past few decades as they have abandoned traditional biblical teaching and values, virtually all of the mainline Protestant denominations have declined dramatically. Sadly, it has barely registered with the media or the public that the last of the mainline denominations that adheres to traditional biblical teaching and theological principles is likely to divide over the conflict of enforcing the standards of the Book of Discipline at the next United Methodist General Conference in May. While their decline has “simply driven members to more orthodox congregations that remain faithful to the core tenets of Christianity,” the absence of strong Methodist, Presbyterian, Lutheran, and Episcopal churches from the center of community life has weakened the power of “cultural Christianity” to shape community values and influence individual behavior. We have seen ever greater disintegration of the family and weakening of community as these powerful mainline church influences have disappeared from the public square.

Worse, those who adhere to the traditional Judeo-Christian values that were at the center of strong families, communities, and nations for thousands of years are now considered bigots who are out of step with today's standards of “morality” as promoted by the 2020 Democrat political candidates and the Progressives, who believe that their pronouncements are intellectually superior to all the established doctrine of the past.

Ironically, the Progressives who are calling Christians “bigots” are turning out to be the closed-minded ones. There can be no reasoning or logical discourse with those whose religion is a special agenda, whose proof is their own opinion, and whose argument consists of name-calling.

This article originally appeared at the American Thinker. It is published here with the author's permission.