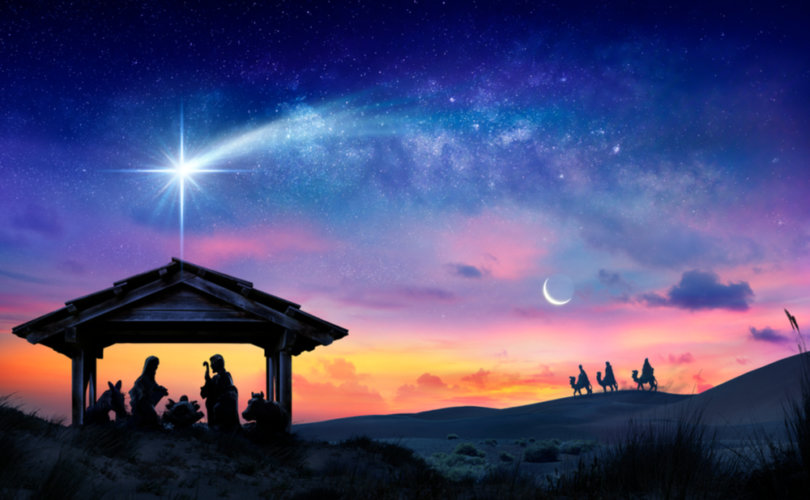 (LifeSiteNews) Ten years ago, I was studying English at La Sorbonne, which is often considered one of the most prestigious universities in France.

One December day, I was sitting in a big amphitheater, listening to my English civilization teacher as she was giving her last class before the Christmas holiday.

Just before ending the class, the teacher addressed the whole amphitheater saying:

“Before I let you go, I would just like to wish you all a happy winter solstice; I will not wish you a happy Christmas because I consider this to be discriminatory toward non-believers or people of non-Christian religions.”

The whole amphitheater broke out in cheers and thunderous applause at these words. As far as I could tell at the time, I was the only student there who didn’t join in.

I was completely shocked by what I had just witnessed. Not only by the teacher’s (utterly ridiculous) statement, but by the fact that it had earned her the applause and cheers of hundreds of students. It made me realize that the opinion she had expressed was not only popular, but almost unanimous.

Of course, this wouldn’t be very surprising today, but keep in mind that this was Paris in 2011, not Portland, Oregon in 2021.

Don’t get me wrong, as a devout Catholic growing up in France, a country notorious for its history of anti-clericalism, I had heard my fair share of anti-Catholic slogans. But this was the first time in my life that I heard one of them being directed at Christmas. I naively thought that this Feast was still too sacred and enshrined in the collective mind of the French people (even if just culturally so) to ever come under attack. I was wrong.

I realized then for the first time that Christianity, and Christian civilization in general, had come to be so despised, that some people actually considered it offensive to wish people a merry Christmas.

For many years now, the anti-Christian elites of the Western world have attempted (not without success), to deprive Christmas of its more obvious and explicitly Christian themes and elements, and turn it into a sort of commercial neo-pagan holiday.

In fact, in the past few years, it has become increasingly clear that Christmas, or at least the Christian nature and origin of Christmas, has come under attack even more so than Easter has, and this despite the fact that Easter is more important for Christians than Christmas. The fact that the very word “Christmas” contains the name of Christ in it is no doubt a significant factor in this.

Some of these attacks have come from the secular state or the godless masses, a typical example would be the banning of nativity scenes, or the censoring of the word “Christmas” as in the anecdote I recalled earlier.

Other attacks, have come from self-appointed “intellectuals” who call themselves Catholics and make it their Christmas priority to shout from the roofs to anyone who will hear that Christ was “very likely not born on December 25th.” These are the same people who will tell you when you visit the Holy Land and venerate the very spot identified by Tradition as the birthplace of Christ in Bethlehem that “thanks to modern archaeology, we now know that this is not really where Christ was born.”

Yet, even when deprived of its more explicitly Christian elements, it seems Christmas still remains too Christian for the Godless elites.

Indeed, for the second year in a row, they have been using COVID as a way to inspire fear in people, and to attack one of Christmas’ central values: the family.

We’re hearing it again “the cases are up,” “there is a new variant,” “people are dying.”

This is usually accompanied by “you should self-isolate!,” “limit your contacts with other people over Christmas, even family, especially if they’re unvaccinated!,” “wear a mask at all times!” and “get yourself and your loved ones a booster for Christmas, that’s the best present you can give!” or “if you don’t follow our rules, people will die, and it will be your fault!”

These words represent the strongest attack against Christmas to date, because of the fear they inspire, fear of COVID, fear of government restrictions, fear of death, or all of the above.

This year, I thought that one of the ways for Christians to claim Christmas back is not to give in to the fear propagated by the government, the media, or even sometimes (unfortunately) by friends and relatives.

This Christmas, it is vitally important for us to cast aside anything that is a source of fear and worry, no matter how hard it sounds, and without feeling ashamed or guilty for doing so.

There is a world of difference between burying one’s head in the sand, and not let oneself be affected by something.

Christians should understand that the reality of Christmas, that is of Christ being born to carry out his work of Redemption for the whole of mankind, is more important than our present tribulations no matter how scary they sound.

This Christmas, let us remind ourselves of the words of Saint Paul to the Romans: “For I reckon that the sufferings of this time are not worthy to be compared with the glory to come.” (Romans 8: 18, DR). Let us truly rejoice over the birth of Christ, and let us say with confidence, “come what may, it will still be Christmas on Friday.”