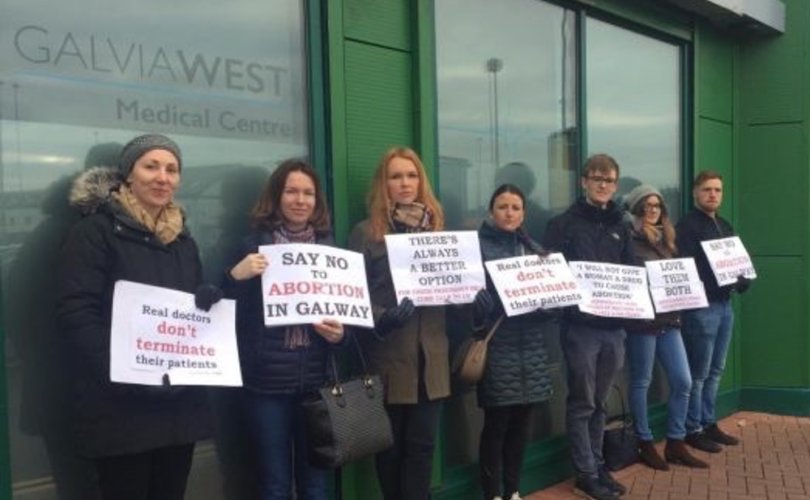 The 'Peaceful Seven' carry out their pro-life witness outside an abortion facility in Galway, Ireland.

GALWAY, Ireland, January 7, 2019 (LifeSiteNews) – The euphoria of the “Yes” campaign on winning the Irish abortion referendum last May is turning decidedly sour.

Not only are those who campaigned for a ‘yes’ vote complaining that the measures that have been rapidly introduced by a compliant government to kill the unborn are not enough, the same people who campaigned for freedom from the then existing restrictions on abortion now wish to restrict the rights of those morally opposed to abortion.

The strategy by which the pro-abortion side wish to silence debate on abortion is through censorship zones, similar to those deployed in the UK around abortion centers. These zones prevent peaceful witness close to abortion centers, as well as prohibiting the offer of practical and emotional support to pregnant women, and the offer of an alternative to abortion.

On January 3, 2019, a group of 7 men and women stood outside the Galvia West Medical Centre in Galway for a few hours on Thursday morning. These pro-life witnesses carried a number of placards reading  “There’s always a better option”, “Love them both,” “Say no to abortion in Galway”. The group left just before lunchtime.

One of those participating in this pro-life witness, Maria Mahoney, told LifeSite:

The demonstration was a group of local residents who were horrified to find out that the only doctor to be dispensing abortion pills in Galway City was right in the middle of their Westside shopping centre, library, and playground. My friend found out that one of the doctors in the Galvia Medical Centre was on the government abortion hotline and then told us about it and helped organise the protest.

We wanted to make sure that anyone going in for an abortion pill knew about the help available by so many wonderful local groups, especially My Adoption Story and Gianna Care. We also wanted to send a clear message to the doctor involved that this was completely unethical and violated the Hippocratic Oath that doctors have taken for nearly 2500 years. It is terrible that the government will give a GP 450 euro [$512] to destroy an unborn baby but only hand over a pittance when a GP looks after an unborn baby.

The group has been dubbed the “Peaceful Seven”, and it appears to have been a restrained and dignified pro-life witness. Silently, promoting alternatives to abortion through the words on the placards that they held, these men and women passionately want to help women avoid making the wrong choice and having an abortion. In any case, in a democracy people have the right to peaceful protest. People also have the right to propagate their views within the framework of the civil society in which they live; and this includes peacefully demonstrating against laws they consider unjust.

The undemocratic nature of Ireland’s pro-abortion lobby was seen all too clearly in reaction to this small and peaceful protest in Galway. It provoked hysterical response from pro-abortionists demanding restrictions on civil rights within Irish society. The Irish Times reported that pro-abortion campaigner Ailbhe Smyth has called on the Minister for Health, Simon Harris, to introduce emergency legislation to introduce UK-style censorship zones around medical practices offering abortion services.  Of course, Harris, who is one of the most pro-abortion politicians in Ireland and who also seems determined to prove his “woke” credentials at every turn, has caved in immediately and promised to introduce legislation for such zones.

If this is not enough for Ireland’s pro-abortionists, they want these zones to be implemented immediately. The current Irish government appears to have little else to do these days than pander to the abortion lobby and execute with lightning speed its lengthening list of demands for more rapid and streamlined killing of the unborn. This state of affairs is not only a sad indictment on Ireland today but more specifically on the country’s political class who, bar a few honourable exceptions, appear to be without any sense of balance or anything approaching a measured approach when it comes to the subject of abortion.

Rushed legislation is nearly always poor legislation. The censorship zones in England – of which there are now two in the London area – may have “solved” one issue in favour of the pro-abortion lobby and their allies in local government but it has infringed basic civil and human rights. As a result, there is a lengthy and costly legal challenge still underway passing through British courts against these hastily contrived regulations. From a neutral perspective, such zones only appear to move the pro-life witness a short distance from where it was previously. So they do not stop such demonstrations. In fact, it could be argued they galvanize them.

The pro-abortionist lobby in Ireland and its many friends in the Irish Parliament are terrified of street protest on the subject of abortion. It flies in the face of their carefully crafted narrative that the Irish as a nation want abortion and are as “chilled out” about the killing of the unborn as any “modern democracy”. For them, the debate is over. All that remains to be done, in their eyes, is the censoring of any remaining opposing opinions because the latter remind anyone listening of the reality of what an abortion consists of in practice.

This same pro-abortion lobby is, however, fooling no one but itself on this score. Across North America, in the United Kingdom and throughout the continent of Europe, pro-life witness has not declined but grown in the years since liberal abortion regimes have been introduced in various jurisdictions. There is no reason why the Irish reaction to the referendum and the subsequent abortion legislation, will be any different – no matter how “progressive” Harris and his allies wish Ireland to be perceived.