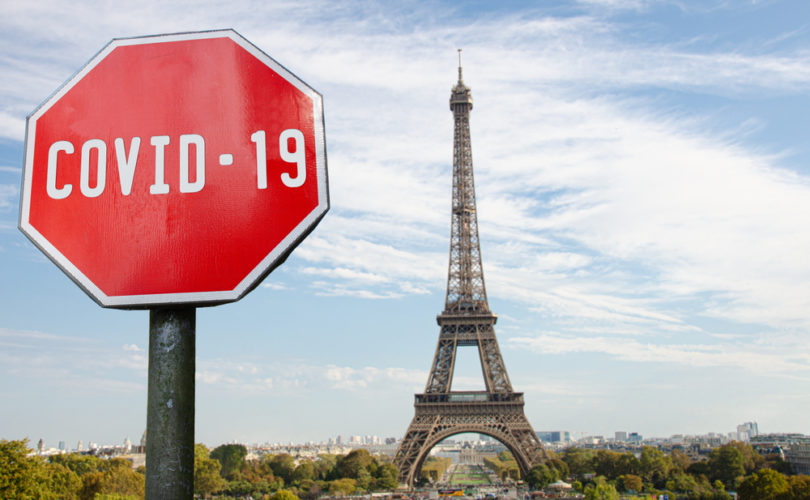 (LifeSiteNews) – As of Monday, I – like millions of other people living in France – will officially be a second-class citizen. Going to a restaurant, a museum, a concert, a cinema, or a swimming pool, having a drink on a café terrace, boarding a fast train, or visiting a relative in hospital or a home for the elderly, will be allowed only to those who have been fully “vaccinated,” who have recovered from COVID less than 6 months ago, or who can show a negative PCR or a genic test passed less than 48 hours ago. Information regarding the citizen’s sanitary status will be included in a QR-code that must be scanned before entering. All of these restrictions on people’s liberties have just been validated by the Constitutional Council of France.

Some restaurants in the Vendée town of La Roche-sur-Yon have made national headlines by starting a few days ago to recruit voluntary pensioners to “police” potential customers. Owners of these establishments will incur a €1,500 fine ($1,766 US), or a €9,000 ($10,597 US) fine for repeat offences, if they fail to check customers’ compliance with the sanitary pass law. Some are acquiring machines that will allow automatic checking at entry.

It is not only the unvaccinated who are fighting the new apartheid being introduced in France: many who decided to get the COVID “vaccine” are balking at the idea of making ordinary, “everyday” freedoms subject to vaccine status; essentially, this is what is happening.

A whirlwind legislative process has finished with the Constitutional Council’s extensive validation, this Thursday afternoon, of the “sanitary pass” law announced by President Emmanuel Macron on July 12th. Mandatory vaccination of health workers was approved by the members of France’s constitutional watchdog, but they also approved most of the other dispositions of the legislation on the grounds that it does not constitute a general vaccine mandate for the population and that they will be applicable only until November 15, when the present “emergency sanitary law” will expire.

But there are doubts about the bill’s temporary status: according to job descriptions circulating on social media, hospitals hiring temporary workers to control sanitary passes are offering one-year contracts.

The Constitutional Council’s decision is disappointing but not unexpected. It has never been known for its courage – in recent decades, it did not hesitate to greenlight the abortion law of 1975 and the same-sex “marriage” bill in 2014 – and it is deeply political insofar as its members are named by the President and by the leaders of the National Assembly and the Senate, without control; it also includes former Presidents.

Opponents of the sanitary pass have remarked that the Court’s president, Laurent Fabius, was involved in the so-called “contaminated blood-scandal” which led to hundreds of people, including young hemophiliacs, getting AIDS because when he was socialist Prime Minister to François Mitterrand in 1985, the French government put off screening blood donations for several months. His son, Victor Fabius, is a member of the McKinsey Advisory Council tasked with organizing the COVID “vaccination” campaign in France since last December.

Whatever the Council’s motivations, its members paid no attention at all to contributions by groups of lawyers and workers’ unions who tried to stop the march towards sanitary dictatorship by contradicting the government’s reasoning on the urgency of the situation and the efficiency and safety of the four COVID experimental jabs that are at present recognized in France. A lawyer who is actively organizing different types of legal action against the sanitary pass, Fabrice Di Vizio, complained that the official recourse submitted to the Council by 70 deputies and 70 senators was hastily and poorly written and completely beside the point, ignoring all important arguments. Di Visio called it a “bogus recourse.” It is mostly based on technicalities and the speed with which the bill was pushed through Parliament.

“Essentially, the Council argued that ‘government said’ and ‘the legislator said,’ and ‘if they said so, it has to be true’,” explained Di Vizio.

The Council’s lengthy response contains, for instance, a paragraph explaining that the French government and Parliament had the necessary knowledge to determine whether a sanitary emergency is present and will last at least until November 15, 2021, and what kind of response was correct, without even referring to the many facts presented by lawyers and professional organizations.

These include documents showing that the “vaccine” does not protect those who get the jab from contracting even severe forms of COVID-19 and of propagating the virus.

While the Council recalled that constitutionally guaranteed freedoms are being infringed upon by compulsory vaccination for health workers (by September 15) and by the requirement of a sanitary pass for many everyday jobs and situations, it said in a press release that the “legislator has the task of reconciling an objective that has constitutional value with the constitutional value of the protection of health.”

“The Constitutional Council ruled that there are provisions which are likely to limit access to certain places, infringe on the freedom to come and go, and, insofar as they are likely to restrict the freedom of assembly, on the right to collective expression of ideas and opinions,” according to its statement. But it said that the lawmakers, in accordance with their “scientific knowledge,” only did what was necessary to stop the spread of the virus, and rightly so because the epidemic is at “significant risk” of spreading from now to November 15. It also underlined that the activities whose access will be limited are “leisure” activities: preventing people from socializing, practicing sports, and obtaining non-urgent medical care is “proportionate” to the situation, it said.

The statement added: “Fourthly, the contested provisions provide that the obligations imposed on the public may be satisfied by the presentation of proof of vaccination status, the result of a virological screening test that does not show contamination, or a certificate of recovery from contamination. Thus, these provisions do not, in any case, establish either an obligation to provide care or an obligation to be vaccinated. In addition, the legislator has provided for the determination by a decree, taken after the opinion of the High Authority of Health, of the cases of medical contra-indication that prevent vaccination and the issuance to the persons concerned of a document that can be presented in the places, services, or establishments where the presentation of a ‘health pass’ will be required.”

This is hypocritical in the extreme: obtaining an invasive nasal COVID test once every 48 hours to prove negativity – at the price of about €50 per test as of October, according to government plans – amounts to obliging people to get the jab or lose their ordinary freedoms. As to contra-indications, health minister Olivier Véran has already said they will apply for only a few dozen people in France. People at risk of anaphylactic reactions after a jab will just have to get vaccinated in a hospital with an ICU unit at hand, he made clear.

The Constitutional Council also brushed aside arguments against forcing restaurant owners or people organizing an event to be made responsible for controlling the public, saying that they will not be required to control citizens’ identities.

The forced vaccination of health workers, which has already led a number of hospitals and hospital unions to announce strikes as of this Friday, was similarly greenlighted, in a context where the deputies and senators who asked for a revision of the law by the Council did not even dispute the mandatory vaccine in itself.

Finally, the Constitutional Council merely decided that compulsory 10-day isolation of COVID-positive patients did constitute “arbitrary detention” in the absence of an individual judiciary or administrative decision.

The Council’s near-complete approval of a law that has already pushed hundreds of thousands of opponents into the streets in the middle of summer – a situation unheard of in France – is bad news, but it has one redeeming quality: in its utter disregard for popular objections to the sanitary pass and mandatory vaccination for many, it will give an even greater impulse to the demonstrations that are continuing to flower all over France.

Emmanuel Macron stated on Wednesday that people who oppose the sanitary pass are “a threat to democracy.”

“In no way will I give in to their radical violence,” he said. “They are creating a permanent disorder because they are challenging the very existence of republican order,” he added.

If possible, this has made the French even more angry. Some 200 demonstrations will take place in many towns next Saturday for the fourth week running.