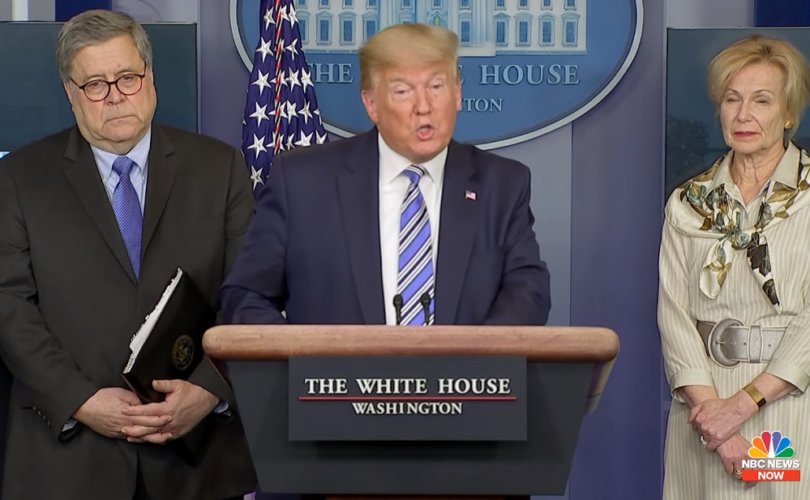 March 23, 2020 (American Thinker) — Many people are regularly watching the now daily press briefings from the White House. During these briefings, President Trump, Vice President Pence, and various members of the White House Chinese Virus team give updates and take questions from a continually shrinking pool of reporters. (Even reporters have to practice social distancing, after all.)

Because the Trump administration has been so forthcoming, allowing people both to see what the federal government can and cannot do and to understand the data and decisions affecting their lives, several polls show that Americans approve of how he is handling the coronavirus. If you look at a Real Clear Politics snapshot from March 21, which shows the consolidated polling data on the coronavirus, you can see that three major polls show Trump’s approval soaring:

In addition to seeing Trump being serious, aggressive, and hopeful when handling the coronavirus situation, Americans also get to see what a terrible job the media are doing. When reporters ask questions, they don’t seek information that will be useful to the American people. Instead, they’re only trying to push the narrative that Trump is a racist, ineffectual idiot. The media may think they’re proving their point, but, through their mean-spirited questions, they end up giving Trump more opportunities to make his case before the American people.

No wonder, then, that a new trend is sweeping through the media world. Media people are demanding that the outlets for which they work stop carrying Trump’s press conferences. Stopping the leftists’ censorship demands is like playing whack-a-mole, because they pop up everywhere. The first to demand censorship was Eric Boehlert, who insisted on March 13 that the media act as a “principled” gatekeeper to ensure that the American people cannot hear from their president:

re-upping my piece from 8 days ago when I urged news media to unplug Trump’s dangerous pandemic briefings; https://t.co/yyeWZk4fmj

On Friday, Rachel Maddow, doyenne of the Russia Hoax, called to silence the president:

Maddow: If Trump is going to keep lying like he has been every day on stuff this important, we should, all of us, stop broadcasting it. Honestly, it's going to cost lives. pic.twitter.com/tMvyrE3YTK

And on Saturday, Margaret Sullivan, in the Washington Post, also insisted on censoring Trump:

More and more each day, President Trump is using his daily briefings as a substitute for the campaign rallies that have been forced into extinction by the spread of the coronavirus.

These White House sessions — ostensibly meant to give the public critical and truthful information about this frightening crisis — are in fact working against that end.

Rather, they have become a daily stage for Trump to play his greatest hits to a captive audience….

Trump is doing harm and spreading misinformation while working for his own partisan political benefit — a naked attempt to portray himself as a wartime president bravely leading the nation through a tumultuous time, the FDR of the 21st Century.

The press — if it defines its purpose as getting truthful, useful, non-harmful information to the public, as opposed to merely juicing its own ratings and profits — must recognize what is happening and adjust accordingly. (And that, granted, is a very big “if”)

William Jacobson, of Legal Insurrection, put her in her place:

This is a now theme in the mainstream media, that they should be the gatekeepers to information despite several years of lying and conspiracy theories. No thank you, we can watch and we can understand and we can make our own decisions. You are not as smart as you think you are. https://t.co/OG2xVIPLC1

Incidentally, Trump has not said that chloroquine is a cure. He says he hopes it is and thinks it may be — but the reality is that, except for off-label use, the FDA is dragging its heels while people die. As for the hysteria about the drug’s ill effects, doctors have been using it for 20 years and know its toxicity. Moreover, it’s a good alternative to death.

Leftists hate free speech. The free flow of ideas always carries with it the risk that their ideas will be challenged and defeated. That’s also why they love universities, where they have unparalleled access to absorbent minds. And why do I suddenly throw universities into this post? Because of this PragerU short video, which sums up the whole problem with the left and free speech: