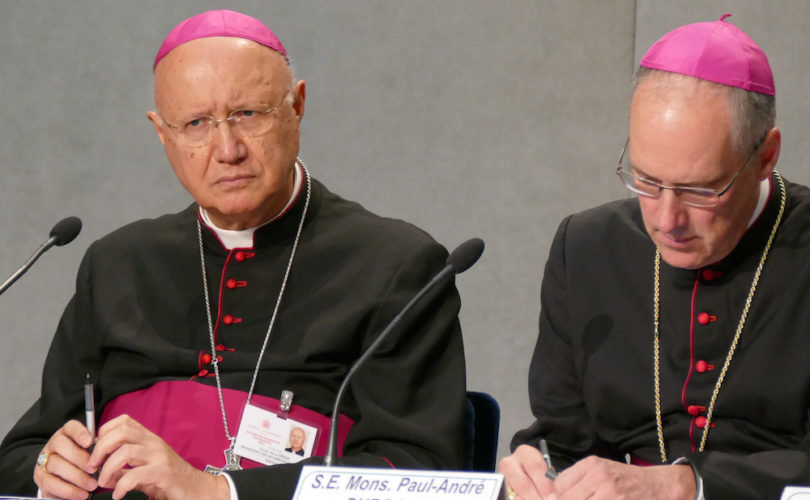 ROME, October 6, 2015 (LifeSiteNews) – If the biggest news out of day one at the Synod on Monday was the clear call to uphold Catholic teaching in the opening report by a leading Synod organizer, Cardinal Peter Erdo, the biggest news of day two may be the evident push-back against him.

While Erdo strongly opposed Kasper’s Communion proposal, among other favored causes of the liberal faction, both of the Synod fathers at Tuesday’s Vatican press briefing – Archbishop Claudio Maria Celli and Canadian Archbishop Paul-Andre Durocher – indicated in one way or another that allowing Communion for Catholics who have divorced and civilly remarried is an “open question.”

And, according to Vatican English-language spokesman Father Thomas Rosica’s summary of the proceedings, some Synod fathers are continuing to advance radical proposals in contradiction of Catholic tradition and practice.

‘It is an open question’

The campaign to open up Communion to those who, according to Catholic doctrine, are manifestly persisting in gravely sinful unions is not new. This issue was debated at the Synod of Bishops on the family in 1980, and answered a year later in Pope Saint John Paul II’s post-synodal apostolic exhortation, Familiaris Consortio.

He wrote, in part:

In his report yesterday morning, Erdo maintained that the Church’s practice is an “intrinsic demand” of the sacrament of marriage that is essential to “the Church’s witness,” and not an “arbitrary prohibition.” To admit remarried divorcees to Communion without repentance would oppose the Church’s “fidelity to the indissolubility of marriage,” he said.

Today at the press briefing, however, Archbishop Celli told reporters asking about the issue that “it is an open question.” Commenting specifically on Erdo’s report, Celli said, “We can’t say everything was closed by the report of yesterday morning.”

Later, Archbishop Durocher also suggested the question was up for debate when asked if the matter pertained to Church discipline – which could potentially change – or doctrine, which is fixed.

“If you want doctrine, go read Denzinger,” he added.

In his report, Father Rosica pointed to a number of reforms that he said Synod fathers have been promoting, in particular: a change in language regarding sinful situations, a wide use of general absolution for the Sacrament of Reconciliation, and the allowance of regional solutions to the question of Communion for the divorced and remarried.

The call for a change in the Church’s language was a major point of controversy at last year’s Synod. In particular, some fathers specifically called on the Church to reexamine the Catechism’s description of homosexual acts as “intrinsically disordered.” Homosexuality, in fact, was the main example Father Rosica used in discussing the language issue, insisting we should never say we “pity gay persons.”

“There must be an end to exclusionary language and a strong emphasis on embracing reality as it is. We should not be afraid of new and complex situations,” he said. “The Jubilee of Mercy also requires a new form of language, both public and private. [It] requires a language of mercy. … The language of inclusion must be our language, always considering pastoral and canonical possibilities and solutions.” ( See Looking Back: Same-sex “marriage” advocate Gregory Baum lauded by Fr. Thomas Rosica)

Critics largely would not object to the notion of adopting a “language of mercy” and tailoring one’s manner of speaking to a particular pastoral situation. However, the concern is that changing the Church’s official language in expressing its doctrine in order to suit the culture will inevitably involve watering it down to make it more palatable to the world.

In fact, the primary advocates of changing the language are also the leading proponents for watering down Church teaching. Additionally, rejecting longstanding doctrinal phrases for newer ones would obscure the meaning of Church teaching – in an age where the Church already is so lacking in clear presentations of its teaching.

On general absolution, Father Rosica said there was a proposal to “consider, perhaps for the Jubilee of Mercy, reopening or reinstituting form three of the Sacrament of Reconciliation, which involves general absolution. This would be a strong indication and a very clear signal to people who are on the fringes to come forward.”

Though it would seem this proposal does not enjoy wide support – Rosica said it was merely “thrown out” as a possibility – the fact that he related it only heightened existing concerns about the Synod undermining the Church’s sacraments. In the Church’s Code of Canon Law, general absolution is allowed only in emergency situations where individual confession is not possible – such as when soldiers are heading into battle – and its use requires that one seek out individual confession at the earliest opportunity.

The push for “regional solutions” to controversial issues has been a prominent cause for the Synod’s liberal faction, in particular from the German fathers. Cardinal Reinhard Marx famously declared that the Catholic Church in Germany was not a “subsidiary of Rome” and would adopt its own approach on family issues.

In response, Cardinal Gerhard Müller, prefect of the Vatican’s Congregation for the Doctrine of the Faith, insisted that for bishops’ conferences to make their own decisions on discipline or doctrine is “an absolutely anti-Catholic idea that does not respect the catholicity of the Church.”

Rosica’s report focused on the proposals for change, with no mention of any defense of Catholic teaching and practice, but it is unclear how prominent these proposals actually were in the Synod hall. We do know that some tradition-minded prelates did speak – in particular, Cardinal George Pell.

Last year many complained of the press office’s marked tendency to relay the views only of the Synod’s liberalizing faction. And even more than last year, the Synod organizers have made the Vatican press office the primary mediator for information about what is happening in the hall.

At Tuesday’s press conference, Archbishop Durocher simultaneously praised and dismissed Cardinal Erdo’s report by arguing that while it was a “beautiful and classical presentation of the Church’s teaching,” his approach needed to be complemented by one that is open to dialogue with the world. The report is “an important piece, but it is one piece,” he said.

The archbishop argued that there are two dominant temptations at the Synod. “One reaction is to emphasize what the teaching is, out of fear that as the culture moves away from that vision, our own understanding is diluted. The other fear is that we lose contact with our culture and that we close in on ourselves,” he said.

Archbishop Durocher’s two temptations set up a false equivalence, however. The reason why prelates such as Cardinal Erdo, Cardinal Burke, and others are so strenuously promoting the Church’s doctrine at this time is not out of a fear or avoidance of dialoguing with the world. It is because those advocating “dialogue” are in fact undermining the Church’s doctrine. The opposing viewpoints are not about doctrine versus praxis, but about fidelity versus heresy.

Our world is increasingly in crisis and its only hope is for the Church to find ways of reaching it with the Gospel. That is why the Synod on the Family should have been so deeply important. But in large measure it has been hijacked by prelates who want to conform the Church to the world, rather than bring the world into the Church, and so it has unnecessarily devolved into a battle over the Church’s very being.

If only the Church’s doctrine on the family, as presented so beautifully in Familiaris Consortio, and even Cardinal Erdo’s report on Monday, were taken as the Synod’s foundation rather than a mere perspective, then it could have been effective. Rather than getting bogged down in debating the “value” of homosexual relationships and discussing settled issues like Communion for the remarried, it could have fulfilled its promise and sought authentic solutions for the struggles of people today.

Of course, there’s still hope that it can find its authentic footing. That’s a prayer we must commend to God.