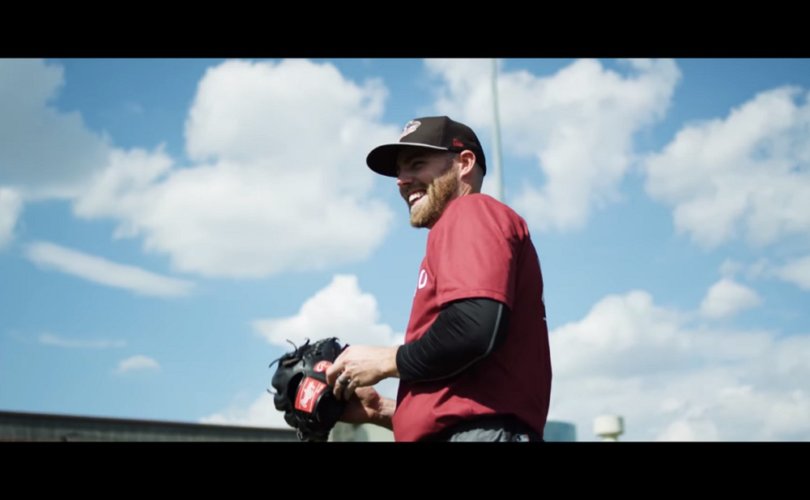 July 27, 2020 (LifeSiteNews) — It’s been said that baseball is as American as apple pie and the Fourth of July.

I have my doubts.

Like almost every other professional sport, Major League Baseball (MLB) has undergone a transformation in recent years – or, more accurately, a capitulation.

Despite having some of the most conservative fans in all of sports, the league has cravenly sold its soul to the liberal mob in recent years.

From transvestites throwing out first pitches to “pride nights” at the ballpark, baseball teams across the country have increasingly caved to the demands of the far left, which clearly has its sights set on requiring total obedience from each and every cultural institution in America.

Sports writers and behemoths like ESPN and Sports Illustrated are the dutiful foot soldiers who carry out the establishment’s marching orders to fulfill those demands.

It’s difficult if not impossible to find a politically incorrect, non-liberal sports personality who rejects the industry’s preferred narrative these days. Jason Whitlock and David Portnoy of Barstool Sports are the only two that come to mind (more on Portnoy in a second).

Really what’s happening is that the cultural Marxists who run the upper echelons of the sports world are propping up left-wing athletes and forcing sports franchises to promote the progressive agenda so they can a) liberalize by a sort of osmosis process ordinary, moderate American males and b) ensure young fans support left-wing “social justice” causes as they get older.

The latest instance of the left’s authoritarianism was on full display after Sam Coonrod, a relief pitcher for the San Francisco Giants, refused to kneel for what was clearly a pro-Black Lives Matter stunt held before the start of their game against the Los Angeles Dodgers last week.

Both teams were lined up and down the field on the first and third base baselines. A black piece of cloth was placed on the ground in front of the players. They were supposed to kneel and hold the cloth in unison as a video message echoing Black Lives Matter talking points aired on the big screen in the outfield.

Coonrod, like the rest of his teammates, held the cloth. But unlike his teammates, he didn’t kneel. His reason? “I’m just a Christian. I believe I can’t kneel before anything but God, Jesus Christ,” he told reporters after the game.

Coonrod added that he meant “no ill will to anyone” by refusing to kneel but that he “can't get on board on a couple of things I’ve read about Black Lives Matter, how they lean toward Marxism and said some negative things about the nuclear family.”

This is an eminently reasonable position to hold. In fact, it’s essentially the same point Marcellus Wiley, an African American who is now a retired NFL defensive end, has made.

“I don't know how many people really look into the mission statement of Black Lives Matter, but I did. And when you look into it, there's a couple of things that jump out to me,” he said recently.

“My family structure is so vitally important to me. Not only the one I grew up in but the one I am trying to create right now. Being a father and a husband, that's my mission in life right now. How do I reconcile that with this, the [Black Lives Matter] mission statement that says, ‘We dismantle the patriarchal practice. We disrupt the Western-prescribed nuclear family structure requirement.’”

In a sane world, Coonrod’s decision not to kneel, rooted as it is in the argument that he only kneels to God, would be enough to mollify any critics he might have.

Two in particular took him to task for it.

“Giants' Sam Coonrod had every right to stand, but his reason fell short,” read the headline of an article written by liberal reporter Monte Poole on NBCSports.com.

Poole accused Coonrod of not being an authentic Christian and called his remarks a “liquid contradiction” that “slid off his tongue and went dribbling down his chest.”

Conveniently, Poole didn’t include in his article the part where Coonrod said he only kneels to Jesus Christ. Apparently he thinks bowing to the mob should take precedent over Almighty God.

An article by Dan Gartland published on SportsIllustrated.com took a similar approach.

“If a central tenet of Christianity is treating others with love and respect, it's not clear how not joining a call for just that would be hypocritical,” he wrote.

Actually, Coonrod explained how it was hypocritical. He said he kneels for Christ alone and no one else. To offer a pinch of incense to a false god would be sacrilege. How does Gartland not understand that?

“Yes, the founders of the organization Black Lives Matter have referred to themselves as ‘trained Marxists,’ a quote that has spread like wildfire by some attempting to discredit them,” an undeterred Gartland continued. “But again, the phrase ‘Black lives matter’ wasn't even part of the clip.”

If Gartland really is that dense and can’t understand how this was the MLB’s appeasing of the Black Lives Matter organization then he may need to find another profession.

While it’s true that the group’s name was not mentioned in the video broadcast in the stadium, it’s clear that it was done to support the movement Black Lives Matter is spearheading.

Had Gartland visited Black Lives Matter’s website, he’d see that they themselves admit they are Marxists who despise Western Civilization. That’s not something taken out of context or put forth by conservatives “attempting to discredit” them. It’s what they actually claim to stand for.

Can you imagine if Coonrod had said he was a Muslim and that he only bows to Allah? Or that he couldn’t kneel because his Jewish beliefs required him not to? I think it’s safe to say that had that been the case, Poole and Gartland wouldn’t have attacked him for his beliefs. But given that he’s a straight, white, Christian, male it’s open season on him.

The silver lining in all this is that President Trump is aware of how the left is using sports to attack traditional American values.

David Portnoy, the president of the highly entertaining but also irreverent website Barstool Sports, sat down with Trump at the White House last week.

He and the president spoke about a wide range of issues, including kneeling at sporting events and the rioting going on across the country.

“Every city is run by a liberal Democrat and they're going to hell and we have to do something,” Trump said.

He’s right. And you know what else? The same thing applies to the world of athletics. Every mainstream sports outlet is run by liberal, social justice Democrats and they’re causing the industry to go to hell as a result. It’s almost impossible to watch a professional sporting event these days and not have some leftist political message thrown in your face.

It’s high time conservatives push back against the cancel culture infiltrating the sports world. If they don’t, more God-fearing athletes like Sam Coonrod are going to be forced to either compromise their religious beliefs or find themselves out of a job. That’s not an America I’m eager to live in.