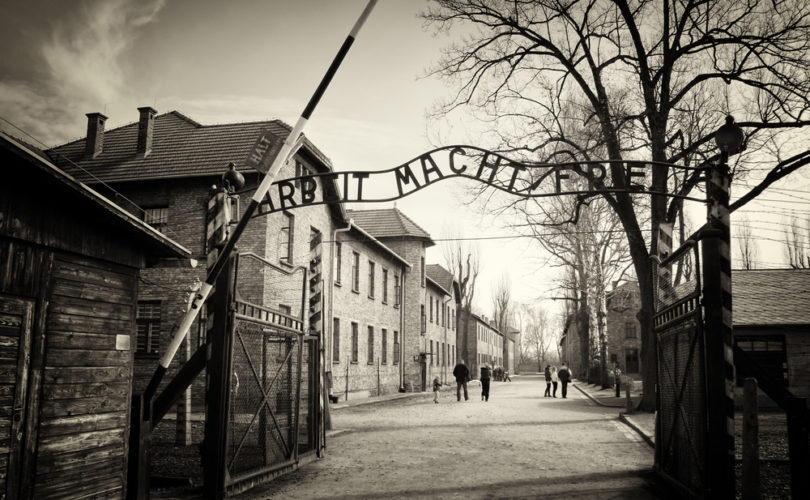 (LifeSiteNews) — In January 2020, Auschwitz survivor Marian Turski related the steps that led to the formation of prison camps and the declassification and then near extermination of the Jews.

“Auschwitz did not fall down from the skies,” he states.

One day in the early 1930s a district in Berlin was the well-respected home of Jewish cultural prodigies like Albert Einstein and Nobel prize winner Nelly Sachs. The next day, out of the blue, a sign reading, “Jews must not sit on these benches” appeared.

Turski articulates the thought pattern those citizens began to experience: “You can say, ‘It’s not pleasant. It’s not fair. It’s not right. But after all, there are so many benches around. You can sit somewhere else. Of course, you can.”

Incrementally, more signs and restrictions for one particular class of people began to appear everywhere.

“Jews are forbidden to enter.”

“Jews must not belong to German singing associations.”

“Non-Aryan children must not play with German children.”

“We only sell bread and food to Jews after 5pm.”

It is a story whose progression of inconveniences feels eerily similar to our own with respect to governments’ often irrational and illogical mandates regarding the COVID pandemic.

The seemingly innocuous initial call to lockdown worldwide for “15 days to slow the spread” later morphed into “two jabs or lose your job.” Government promises that the COVID vaccines would never be mandatory were replaced by government threats of onerous fines for businesses that do not comply with the latest order to have its employees take the experimental inoculations. Calls to “trust the science” soon became a campaign to hide the data and dox or eliminate anyone who questioned or criticized the official narrative.

How did all of that happen?

Gradually, and then all at once.

According to Turski, speaking at Auschwitz about how the camps arose, “It is done step by step. Slowly people begin to see that this is something normal.” The notion that “someone may be excluded becomes mediated into our lives. The thought that somebody can be stigmatized. That someone may be alienated … that they are alien people, that they carry germs that cause pandemics.”

“And this now is a horror that’s dangerous. This is where what may happen soon takes its origin.”

According to Turski, once the government recognizes its populace is desensitized to disparity, it moves quickly to impose restrictions on travel and jobs, and then begins removing people from their homes.

This warning should not be underestimated or dismissed as the mere fearmongering of an old man seeking modern relevance. After obtaining his freedom in his youth, Turski dedicated his life to spreading the truth about Auschwitz and the other death camps that left indelible scars on so many souls, to ensure that the tragedies endured would never be forgotten or repeated. Furthermore, there currently is grave reason to be concerned about the re-establishment of internment camps in the name of COVID, as well as the stripping of basic human rights.

Look at Australia, which apparently longs to be at the forefront of lockdown implementation. At first the construction of internment camps in Australia to house suspected COVID-positive citizens was just a wild internet rumor, surely the realm of conspiracy theorists. Now mainstream media reports and first-hand accounts confirm their existence.

The case of Hayley Hodgson, who recently spent 14 awful days at Camp Howard Springs in Australia’s Northern Territory, provides some context. The camp was built to house 2,000 prisoners. Yes, prisoners, as the folks brought there are brought against their will and without due process. They are isolated onsite and cannot leave the camp; each prisoner risks being fined $5000.00 per infraction by the government for being difficult or violating the camp’s rules. Even the double-vaccinated can be incarcerated. Camp Howard Springs is an example of where “two weeks to stop the spread” has ultimately led us, and more camps are being built.

Yet an even darker subject looms: Are things about to become even more uncomfortable and nefarious? Are the governments that intimated or promised their citizenry understanding, common sense policies, no vaccine mandates and the like considering even more draconian steps to prevent the spread of COVID, steps like murder and genocide?

Turski reminds us that what happened to him can happen to us and happen anywhere. When he was in the U.S. in the 1960s, Turski found himself asked about that prospect and answered, “It can also happen in your country, in this land, when the civil rights are broken, when people do not obey the laws [protecting] minorities.”

He continued: “There is only one way out. Only you. If you are capable of defending your Constitution, defending your laws and your rights, your democratic order, which is based on the protection of minority rights, only then will you be able to conquer all that evil.”

The solution, he stated, can be summed up in what a fellow camp survivor termed the 11th Commandment: “Be not indifferent!”

“Do not be indifferent when you see that the past is stretched to fit the current political needs,” he continued.

“Do not be indifferent when any minority is discriminated [against] because the essence of democracy is that the majority governs but democracy hinges upon the rights of minorities being protected, and they have to be protected.”

“At the same time do not be indifferent when any power of government infringes on the social compacts that are there, that are already extant … because if you are, you won’t even notice when you, when your heirs, will suddenly see an Auschwitz falling down, dropping down, from the skies straight on them.”

Turski’s points are echoed by another death-camp survivor, Alexander Solzhenitsyn, who spent the better part of a decade in the Russian gulags. In the Gulag Archipelago he mourns the injustice of his arrest, writing, “And how we burned in the camps later, thinking: What would things have been like if every Security operative, when he went out at night to make an arrest, had been uncertain whether he would return alive and had to say good-bye to his family? … The cursed machine would have ground to a halt! If… if… We didn’t love freedom enough. And even more—we had no awareness of the real situation…. We purely and simply deserved everything that happened afterward.”

Death-camp survivors understand that civil society can be transformed bit by bit into a machine for evil. A formerly civil society does not just crumble but intentionally finds new lows when it sanctions the arrest of individuals for specious reasons and forces them into prisons or labor camps without due process.

Once this level of dehumanization occurs, it is but a short leap to excuse the harm or genocide of an entire class of individuals. Right now, the class of individuals being targeted is not just the unvaccinated or those who refuse to don the mask—it is all of us—and if Turski’s warnings are correct, there is no time left to remain indifferent.