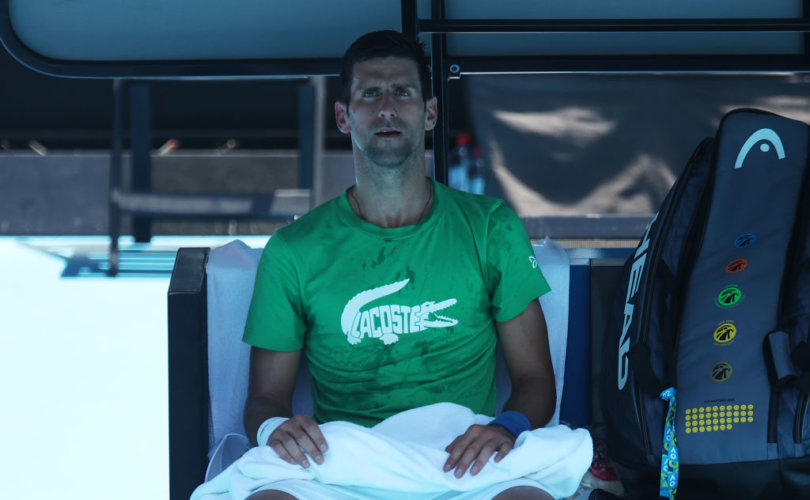 MELBOURNE, Australia (LifeSiteNews) — The Australian government’s decision to deport the world’s number one tennis player, Novak Djokovic, preventing him from playing in the Australian Open, is yet more evidence, if any were needed, that the management of the ‘pandemic’ has everything to do with politics and almost nothing to do with health.

It should be noted that Novak is currently tied with 2 other players, all having won 20 grand slams each. Winning this year’s Australian Open would make him the best tennis player in history.

Immigration Minister Alex Hawke did not even bother to hide his political tactics, citing no medical evidence relating to Djokovic’s case. Instead, he was only concerned that it might affect the relentless propaganda campaign being waged on the Australian people. This is all about mind control, not health.

It is stating the obvious to say that Djokovic was no threat at all in a medical sense. His sin, according to Hawke, was that he is “perceived by some as a talisman of a community of anti-vaccine sentiment.” According to Hawke, that spells a threat to the governments’ illegal, brutal, and profoundly unethical vaccine mandates, border controls, and nation-wide imposition of medical apartheid.

Having regard to … Mr Djokovic’s conduct after receiving a positive Covid-19 result, his publicly stated views, as well as his unvaccinated status, I consider that his ongoing presence in Australia may encourage other people to disregard or act inconsistently with public health advice and policies in Australia.

As someone who was jailed for the sin of expressing a political opinion, I find Hawke’s comment about “rallies and protests” especially chilling. The implication is that Djokovic is being punished because to let him in might encourage people to publicly express their anger against government policy. We can’t have that.

In reality, the effect on those who oppose the medical tyranny is more likely to be the opposite. Djokovic’s deportation will only inspire greater protests amongst the large, and growing, section of the population that is awake to the government’s crimes. But such subtleties are beyond the understanding of politicians who have decided to become tyrants. Once you stop regarding all your citizens as equal then you have taken a step into the abyss and there is no bottom.

On the other side of the ledger, much of the Australian population – and of course a completely compliant mainstream media populated by stenographers masquerading as journalists – cheered the decision. It was as if a witch had been discovered in our midst, and he had to be expelled otherwise all manner of evil would be unleashed.

The government and media’s strategy has been to create the impression that it was a very popular decision and that the government had stepped in to make sure everyone ‘follows the rules’.

This has been very socially revealing. If there is one unforgettable lesson of the last two years, it is the exploding of the notion that Australians are larrikins who disrespect authority. In reality, a more compliant population is hard to imagine. Everywhere you go, people watch each other to make sure everyone is obeying, immersed in a herd mentality based on fear. These people believe they will somehow be safe if only they follow what the government says. As those government dictates get more and more ridiculous and contradictory, they only double down harder as if to be more compliant will somehow make the nonsense resolve itself.

Thus, many celebrated the deportation of Djokovic, not because of any health outcome, but because they were overjoyed that their collective psychological delusion had been confirmed. Especially absurd was that some unvaccinated people, who had lost their jobs, supported it because ‘the rules should be the same for everyone’. One can only sympathise with Djokovic himself, who has absurdly been made the object of mass psychosis.

Australia is no longer a nation that respects its own laws, so Djokovic had no chance of getting a just outcome. Something little noticed in all the furore was that he had initially refused to disclose his health status, asserting, entirely reasonably, that it was a private matter (this makes nonsense of the claim that he was an icon to so called ‘anti-vaxxers’). To say the least, Djokovic’s desire for privacy did not survive long. His health details have been blared around the world.

It is a reminder of how far Australia has fallen. The Federal Privacy Act of 1988 stipulates that it is a crime to force people to disclose their health details, something potentially punishable with long jail terms. Yet restaurants and cafes around the country are breaking that law every time they demand to see customers’ vaccination details.

Likewise, the democratic checks and balances no longer work. The state legislatures have handed off the job of issuing ‘mandates’ – which are not laws because if they were they would be overridden by Federal laws – to the Executive. It is a shabby work-around. The judiciary has also done absolutely nothing to uphold the law. I suppose their main interest has been in getting a deal whereby they do not have to take the risky vaccines, even as they force it on others.

Many of the things that used to bind Australians have been destroyed by what amounts to medical tyranny. The appalling treatment of Djokovic is just the latest episode in the undermining of the country because of the medical apartheid.

Monica Smit has been on the front line of Australia’s fight for freedom since August 2020. Most recently she is internationally recognized as Australia’s first political prisoner. She spent 22 days in solitary confinement for refusing to sign draconian bail conditions. The conditions were appealed and revoked. She is now free to continue her work.

Monica founded an organization called ‘Reignite Democracy Australia’, which now offers a business directory, a social media platform, and 100 community groups around the country, and keeps Australians informed every day with current news and resources.