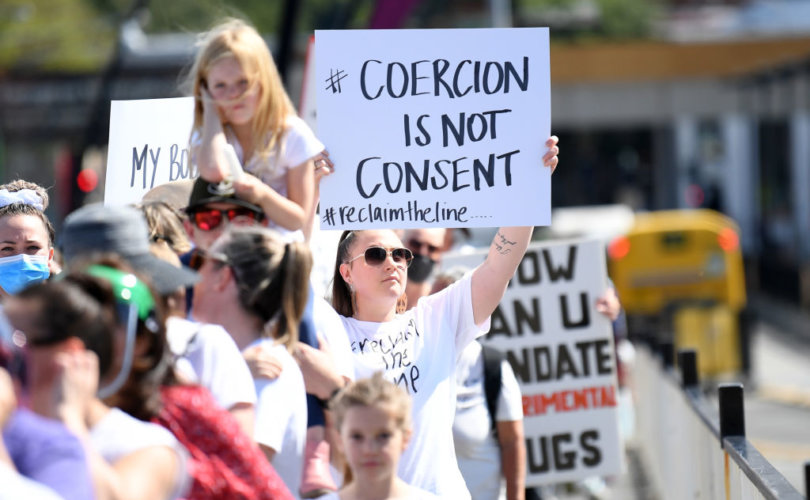 Protesters march across Victoria Bridge during a rally against a mandatory COVID-19 vaccine on October 1, 2021, in Brisbane, AustraliaPhoto by Dan Peled/Getty Images

(LifeSiteNews) — When the dust settles, as it inevitably will, over the COVID fiasco of the last three years, Australian journalists will come to realize that they have missed the biggest story of their lives. By failing to ask any of the obvious questions and parroting the government and politicians’ line, they have turned the Fourth Estate into manure. There will be no going back.

A journalist’s job is not to pretend to have expert knowledge because they rarely, if ever, do. Nor is it to take sides. It is to report different views in a neutral and fair way. Or rather that used to be a journalist’s job. Now, it seems to be to have turned into the art of the lickspittle; it has become a vile propaganda arm of government.

A demonstration of the death of journalism has been provided by John Flint’s so-called “must read” investigative piece in the West Australian on October 2, entitled ‘What becomes of the anti-vaxxer?’ Flint’s intent is to attack Monica Smit and others of similar view. Smit was outrageously jailed for simply assuming she had the right to express a view and connect with other people of like mind, and Flint especially targets her events, including making claims about some people attending them – an attempt to create guilt by association – that are lies: disinformation, not misinformation.

He rolls out the usual collection of fallacies: ad hominem (attack the person and not the argument), ad populum (if most people believe it, it must be right), straw man arguments, and post hoc propter hoc (if it occurs after the fact, it must be because of the fact). And of course there is the linguistic bag of tricks that journalists use when trying to insult or attack.

So let’s go through this swill. The ad hominem attack is, as ever, inevitably centred around the phrases ‘anti-vaxxer’ and ‘conspiracy theorists.’ The claim here is that anyone asking questions about the jabs is wrong by definition and a little crazy. The implication is that Flint knows for certain that the vaccines are exactly as advertised. And he knows this how? And what is his rationale for denying people the right to question a medical procedure and make their own medical decisions without being coerced by losing their job or being “locked out” of most of society (to use Premier Daniel Andrews’ awful phrase)? And how is it that a journalist, whose job is to ask questions, is denying others the right to ask their own?

The ad populum nonsense is found in his statistics suggesting that most people got the jab. Flint takes this as a vote of approval for the vaccines (which are not vaccines, but rather gene therapies, as outlined in the Therapeutic Goods Administration’s web site). He says only 1.6 per cent of the population “resisted” the jabs (that is, made an independent decision), suggesting that only the lunatic fringe did not succumb. Even if this figure were correct, and it is not, it implies nothing of the sort. People were coerced into getting jabbed. All that shows is that many people went along with it because they felt they had little choice. That is the definition of medical tyranny and the destruction of the doctor-patient relationship (because doctors were coerced by the government bureaucracy). It is also the denial of informed consent because most people were not told that it had not been approved. And there was an invasion of medical privacy, which under Federal law is a criminal act punishable with up to five years in jail. But nothing to see here. Everything’s fine. The governments have done a good job. Shut up and applaud.

RELATED: ‘I wake up every day in agony’: Man suffering nerve damage after receiving COVID shot shares his story

— Article continues below Petition —
The Quebec College of Physicians must not be allowed to murder infants
Show Petition Text
4942 have signed the petition.
Let's get to 5000!
Thank you for signing this petition!
Add your signature:
Show Petition Text

Then we get the straw man arguments, whereby you exaggerate or falsify the opponent’s position and then attack it: “We were told by anti-vaxxers the mandates, QR codes and masks were part of a dastardly plan to subjugate us for ever more.” For most of the protestors this is not the claim being made at all. The argument is that we have already lost our basic rights by being locked down, coerced, forced to use vaccine passes and to put on ridiculous masks. Once a right has been taken away, how can it be said to be a true right? The crime is not off in the future although the situation can easily deteriorate more. The crime has already been committed by governments and the bureaucrats. And it is getting worse, with legislation being introduced, first in Queensland and then across the country, to suspend doctors’ licences if they do not support the government’s position and undermine confidence. The medical tyranny is already here, and it is not temporary (as evidenced by Andrews arrogating to himself the power to declare a pandemic whenever he wishes).

Then we get post hoc propter hoc in Flint’s virtuosic parade of fallacies. This one is being used everywhere. The claim is that if someone has been jabbed and tests positive for COVID and the symptoms are mild or non-existent, then this must be because they have been jabbed. It couldn’t possibly because the person’s immune system dealt with it. It happened after the jab; therefore it must be because of the jab. Nothing to see here.

Finally, just to complete the idiocy, Flint brings in a red herring: deriding his targets for having a view on the Russia-Ukraine war. So who is losing his “relevance” here?

COVID was, according to Flint, “the deadliest health emergency in Australia for 100 years.” So how come the Australian Bureau of Statistics (ABS) has recorded that the average age of death, from or with, COVID was 81 in males and 86 in females, which is identical to life expectancy in Australia? How does that constitute a deadly health emergency?

Or compare the deaths (with or from) COVID with flu numbers. In 2019, a 12-month period, flu killed 4,124 people. COVID deaths (from or with) accounted for 9,428 deaths over a 24 month period (the ABS’ own table actually is contradictory, putting the deaths at just over 7,000). So the deaths from COVID were much the same as the seasonal flu.

Or consider this. According to the ABS, COVID was the “34th leading cause of death” in 2021 (there were also only two deaths from flu, which was, one might say, a little odd). So the “worst health emergency in 100 years” was the 34th cause of death in Australia when it was at its height. How does that make any sense?

Of course, anti-vaxxers are not allowed to use actual data or draw obvious conclusions. Too busy with our conspiracy theories, I suppose. Pointing out the factual errors in journalism as dishonest as this is probably a bit of a fool’s errand.

Yet anyone willing to use even the most basic logic will see that something is very wrong with all this journalistic poison. Here are some of the questions that should be asked:

Perhaps it is too much to ask an unthinking journalist like Flint to use logic, or look at facts that might contradict the government position. He is obviously not all that bright. But his use of language is culpable because of its complete dishonesty. This is what his word tricks look like in reverse:

Rabid pro-vaxxer and government lickspittle John Flint has yet again betrayed the basic practice of journalism by attacking those who are willing to ask important questions of our government. The flow of misinformation in his articles has not abated, as he pushes his hard-core arguments that those who think for themselves are a deadly threat to the nation, especially if they run for office. Has he lost all relevance?

Flint has been running the conspiracy theory that those who don’t agree with the government are running a COVID-hoax, a self-appointed position based on his non-existent knowledge of viruses and pandemics. With his long history of making inaccurate and misleading claims, he is doing an excellent job of making sure that decent journalism has been marked ‘do not revive under any circumstances.’