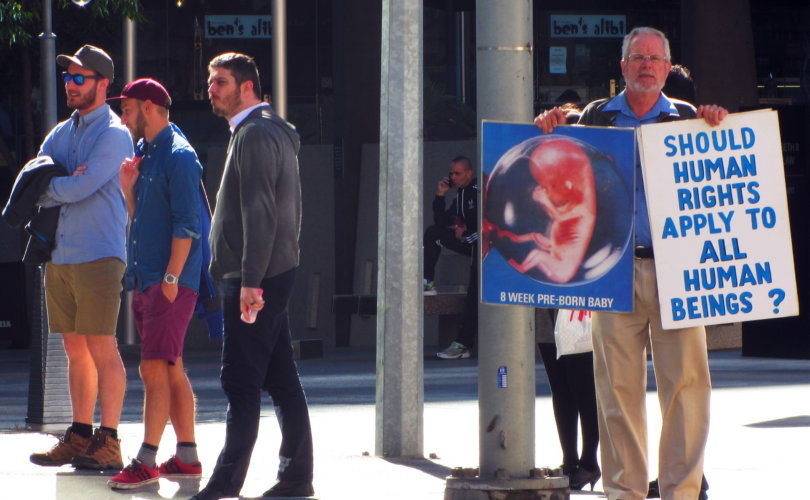 March 30, 2017 (LifeSiteNews) — In a move that has stunned the Australian pro-life community, the Supreme Court of Victoria ruled last week that showing a picture of a dead foetus in public is a crime.

The Court's reasoning? The public display of dead unborn babies “may be so distressing as to be potentially harmful” and “disgusting, repulsive, repugnant, and offensive having regard to contemporary standards.”

Unfortunately, the case upheld the criminal conviction of Victorian pro-lifer Michelle Fraser for displaying images of dead foetuses (which the law deemed as being “obscene”) in public at a peaceful demonstration against the barbaric practice of abortion in 2013.

Fraser’s arrest occurred outside an East Melbourne fertility control clinic where she held two photos of abortion victims. One was age 10-12 weeks in utero, the other 24 weeks.

“My intention was to let women know that their unborn babies are not clumps of cells. It was also my intention to let people know that the abortion clinics lie,” Fraser said at the time.

“I am passionate about exposing the evil of abortion as I was lied to and told my baby was just a clump of cells and not deserving of anything except the rubbish bin.

“I want other women to at least know what they are doing so they are without excuse. I also want these abortion victims to have a voice. I am happy to go to court for the babies, to stand in the gap and have the law keepers give their judgments.”

For a start, if the photos of a dead unborn baby are distressing, then is it not at all distressing to realize that 100,000 unborn babies are murdered in the womb each year in Australia alone? A mother's womb is supposed to be the safest place in the world and yet the government and feminist “pro-choice” groups have enabled, legitimized and legalized the wholesale slaughter of preborn life.

This only goes to show the hard-heartedness and corruptness of the Supreme Court and its judges that they're more concerned about dead babies being shown in public than being outraged at the merciless destruction of human life.

I'm no legal expert, but this ruling means that the truth about abortion practices can no longer be exposed and accurately shown for what it is in public places, which include everywhere from lecture theaters, schools and the steps of parliament to church services, parks, libraries and roads.

Despite the fact that this is a Victorian decision, similar laws exist in other states around the country that can be applied in the same way to stifle this type of pro-life political speech. Mind you, this sign-holding would fall under the category of communication between voters concerning political matters, which is constitutionally protected in Australia.

The horrifying and confronting reality of abortion — and the way it destroys innocent pre-born human life and damages women's lives and the wider community — is being stifled in the name of political correctness. Truth about anything can sometimes be ugly and uncomfortable, but that doesn't change the fact that it's reality. The solution is not censorship but critical thinking, contemplation, and evaluation on the part of the individual.

The world didn't have a clue about the terrible atrocities committed by ISIS until we saw images and footage of “Jihadi John” holding up beheaded heads on an unknown sandy desert. Nobody would have known the horrors of Nazi concentration camps in World War II or the terrors of being burned with napalm in the Vietnam War if not for the brutally honest, gut-wrenching photos brought to us by brave photojournalists. Even the photos of lung cancer on cigarette packets are there for a reason. Do we ban them? No, because that would be not only highly irresponsible but also grossly negligent of the health establishment to fail to warn the public of the health dangers surrounding smoking.

In the same way, it is highly irresponsible and grossly negligent of those who are informed about the lasting trauma of abortion not to inform those who may be ignorant.

When truth is exposed, the world is a better place because of it. But when the truth is allowed to be covered up and hidden from the public eye, our society continues to reap the consequences of darkness.

To ban the exposure of evil is as great a travesty as the crime itself. The Supreme Court is clearly aiding and abetting the abortion murder industry by covering up the evidence of their bloody deeds.

Just 10 days ago, the absolutely deplorable World Naked Bike Ride took place in the heart of the Melbourne CBD. Hundreds of riders wearing absolutely nothing rode around in full view of the public to prove a point about on-road cyclist safety. How is that acceptable and not “disgusting, repulsive, repugnant and offensive having regard to contemporary standards?” The double standards here are absolutely nauseating.

The assault on free speech has really been taken to the next level by those who are bent on censoring reality in recent days. The case I mentioned earlier follows the revelation that Victoria's prestigious Monash University will be the first Australian university to follow their American counterparts and implement “trigger warnings” for “emotionally confronting material,” including abortion.

The politically-correct pilot program contains 15 of the university's course outlines that display warnings of potentially emotionally distressing content. The pilot also requires all academics to review their course material and flag potentially distressing content. Not only is this move blatantly suppressing free speech it is also pandering to adult students who wish to be shielded from material they disagree with simply because they cannot handle reality.