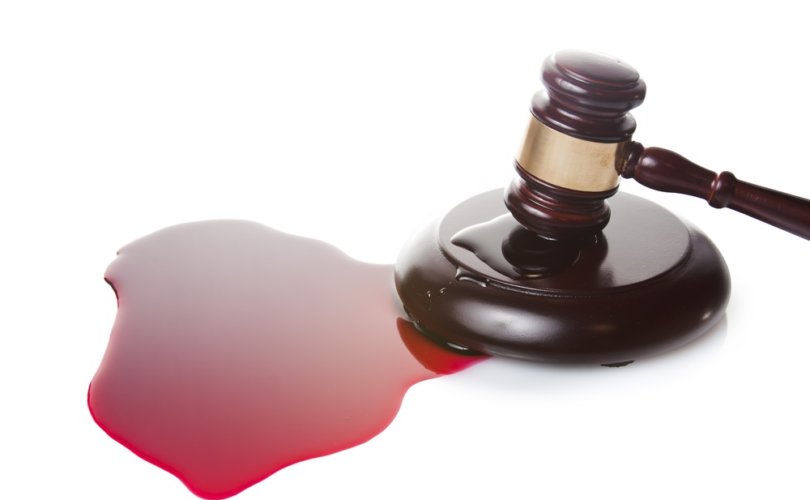 MELBOURNE, Australia, February 21, 2020 (LifeSiteNews) — Abortion-mill “bubble zones” were first introduced in Tasmania in 2013, with other states and territories following suit since then. This article explains my part in the legal challenge to those zones, which ended this week in Melbourne.

In 2015, bubble zones, also known as exclusion zones were passed by the Victorian Parliament and came into effect in mid-2016, under the title of “Safe-Access Zones.” These zones are designated areas inside which pro-lifers are forbidden to “communicate about abortion” or try to “dissuade women from procuring abortions” on the basis that this causes already vulnerable women undue stress. Strangely, there is not much discussion around why women would feel anxious when fronting for an abortion — except by pro-lifers. The unnatural nature of killing one’s offspring is never brought up in the courtroom and neither are the consequences of such an act.

After much strategizing, it was decided that an attempt should be made to deliberately breach the zone in order to test the law, and I made the decision to be involved.

As a symbolic gesture, it was decided that the action should take place at the Fertility Control Clinic, on Wellington Parade in Melbourne. This is the site of dozens of abortions weekly and is estimated to have killed 350,000 babies since 1972. Since 1993, there has been a permanent presence by the Helpers of God’s Precious Infants outside this facility. The Helpers have seen around 300 turnarounds during that time, with some of those saved babies now adults in their twenties.

On October 4, 2016, a friend and I entered the exclusion zone. It was my role to approach an abortion-minded woman, and my colleague prayed silently to test the law in that way. We carried no signs or banners. I had a couple of pamphlets, and my friend, Des, carried only his rosary beads. Paul Hanrahan from FLI and representatives of the Melbourne Helpers had been in discussion with senior Victoria Police officers for several weeks prior to this regarding the best course of action to test these totalitarian laws.

Police detectives were watching from farther down the street, gathering evidence for what we all knew was likely to be a protracted case that could take several years to progress through the legal system.

After some time, I approached a couple who were about to enter the abortion mill and offered to help them. The encounter took no more than five seconds and ended with them declining my help. This five-second encounter was to earn me a $5,000 fine, a good behavior bond, and a criminal record. As has been noted by several courts, the couple were not visibly distressed by my actions, and there was no shouting or abuse. But the Safe-Access law is designed to capture activities deemed “potentially” distressing — that is to say, activities that cause abortion-minded women to acknowledge the irreversible and immoral act they are about to commit.

(I sometimes wonder what happened to this young man and woman. Dd they go through with an abortion? Is there any possibility that they changed their minds? How do they feel about it all now?)

After this encounter, two police officers arrived in a squad car: the young man read from a sheet the law that I had apparently broken. His voice and hand were shaking; this was the first arrest in the state under the new law, and he knew that it would be going through the courts as a test case. I was asked  to move along but refused, all the time remembering St. Thomas Aquinas’s words: “An unjust law is no law at all.”

I was read the riot act and taken away in the squad car to Richmond Police Station. We later learned that twenty police officers had been briefed about a “demonstration” that could take place that morning. I had noticed a lot of movement in my peripheral vision soon after my arrest and only later was told that this was the dozen or so police who had swarmed the area.

Would that they were able to go into that abortion facility, where the real crimes were taking place.

The Magistrate’s Court hearing took place over a period of months in 2017. The prosecution’s star witness was a counselor for the abortion mill, who took delight in describing the alleged traumas inflicted on women by sidewalk counsellors and peaceful prayers. I did not agree with a single word she said, but believe me: this woman deserved an acting award.

Finally, I was found guilty, but not before the magistrate subjected me to highly offensive questioning at the sentencing. “How many fathers do your children have?” and “Why are you homeschooling?” were among the many irrelevant questions asked by this magistrate. Even as she admitted that I was normally a law-abiding person, she called me unrepentant and my actions premeditated. It is so strange to think of trying to save lives as being a criminal activity while killing babies is the legal one. I was placed on a good behavior bond and given a stern admonition that had I not had a family, I would have been sent to prison.

We submitted applications to both the Supreme Court and the High Court for appeals — the High Court was our main goal, since this is where we would lodge a constitutional challenge to the law itself. Surprisingly, the High Court took up the case first, joining it to that of Graham Preston, a veteran pro-life activist who had breached an exclusion zone in Tasmania. The cases were heard together, since the Tasmanian and Victorian laws are very similar.

In applying to the High Court, we were hopeful that these zones could be found unconstitutional, in part because similar zones created around logging sites and intended to stop environmentalists from harassing workers were deemed unconstitutional in 2017. Our case rested on Graham’s and my actions being a kind of “political communication” since the Australian Constitution does not recognize freedom of speech.

Our opponents at the High Court comprised the attorneys general of New South Wales, Tasmania, Victoria, South Australia, Western Australia, and Queensland as well as the commonwealth attorney general. To call this a David and Goliath battle is no exaggeration.

The High Court hearing was in October of 2018; our case was heard by the full bench of seven judges. As the hearing progressed, it became obvious that we were not in a good position; it was most likely that we would lose. But I held on to the hope that at least one judge would dissent from the majority and give us something legally to cling to in the future.

The decision was handed down in April 2019, and I flew to Brisbane for the occasion. Unfortunately, all seven judges were unanimous in their decision: they ruled that “Safe-Access zones” are constitutional and that while they place a slight burden on our freedom of political communication, this is not an undue burden. Graham Preston’s actions were deemed clearly political — he was holding a sign that said “everyone has the right to life.” Mine were deemed not to be political, with one judge saying that “a decision to abort a pregnancy is a personal — not political — choice.”

But as one commentator rightly said, “it is a personal choice about a political issue.”

In fact, the human rights of the tiny Australian citizens did not figure in this case at all. This was a very discouraging part of the process: knowing that there was nothing at all we could do to change the legality of abortion.

The High Court decision marked a dark day for Australia, but the news was almost entirely neglected by the mainstream media, who revelled instead in the case of Israel Folau. His now infamous social media post and the ensuing scandal hit the news the day after our judgment, and our story was ignored just as totally as society ignores the deaths of those thousands of tiny babies.

My legal team felt that we had one more chance for success in the Supreme Court. I was to appeal my conviction on the basis that the magistrate had erred by finding me guilty of communicating about abortion, beyond a reasonable doubt, when there was no evidence that I had done so.

However, the Supreme Court judge ultimately found that even if the magistrate had made a mistake, it would have no bearing on my guilt. She found that although I may not have mentioned abortion, my reason for being there and my well known views on abortion were enough to convict me. This decision came down this week, Wednesday, February 19, 2020. One week before Ash Wednesday.

Making penitential sacrifices, giving alms, and much prayer are needed to turn around “the culture of death,” which has taken over a society built on Christian principles. In our “enlightened” Australian culture, killing babies is a protected activity, offering help is against the law, and thoughtcrime has become a legal reality.