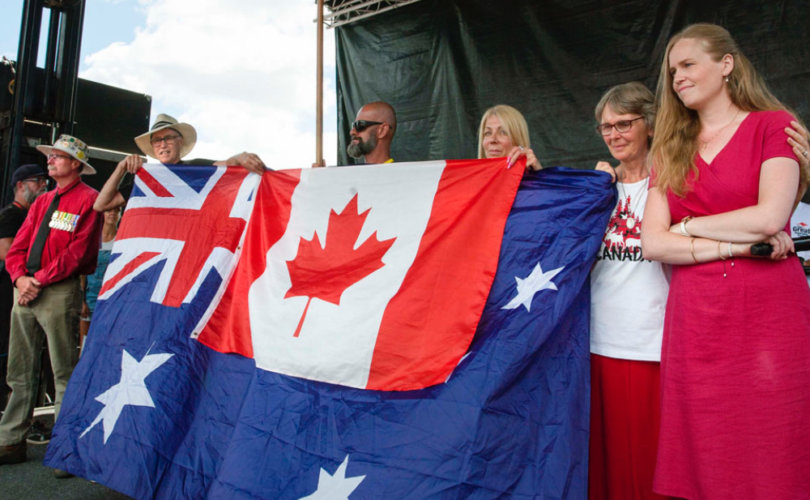 (LifeSiteNews) – The justification for vaccine mandates was supposedly to save lives. Instead, due to understaffing and long wait times, lives are being put at risk. Australia has an emergency care crisis and a 000  (the number people call in urgent situations) crisis. I wonder, has anyone asked a mother whose child is choking if she would prefer an unvaccinated paramedic in five minutes or a vaccinated paramedic in one hour? Or a mother whose son is crying with a broken arm in the emergency ward if she’d rather see an unvaccinated doctor sooner? Has anyone actually asked the patients what they want?

The Australian media is covering this health crisis, but not connecting it to the fact that thousands of trained staff have been stood down due to COVID vaccine mandates. On top of that, thousands more staff have been prevented from working across the healthcare industry: disability support workers, aged care, youth workers, students and administrators. Most of them love their job and have worked hard to get into their positions.

At Reignite Democracy Australia (RDA) we have started a campaign to raise awareness. It is being conducted on behalf of 1600 banned healthcare workers. They are people who have formed strong bonds with their clients/patients, yet they have been ripped away from their work due to the mandates.

These crucial health workers have been faced with an awful choice. Either lose their jobs or take vaccines, which are yet to be officially approved, according to the Federal Government’s Therapeutic Goods Administration, against their will. Many have chosen to find work in other industries, leading to a loss of skilled healthcare professionals. For those who have been pressured into leaving, it is a massive career blow. The COVID vaccine was not in their contract of employment; how were they to know they could spend years of their lives training for a job only to lose it for not taking a vaccine that was rushed to market?

It is completely logical to refuse to be injected. Vaccine drug trials have in the past taken at least six years, not six months, for the obvious reason that you cannot test for the medium term without waiting at least that long. It is not possible to know in the short term the long term effects.

READ: How are Australia’s COVID authorities going to explain away a 63% drop in births?

— Article continues below Petition —
Stand with faithful Archbishop Timothy Broglio as the NEW President of the United States Conference of Catholic Bishops!
Show Petition Text
9211 have signed the petition.
Let's get to 10000!
Thank you for signing this petition!
Add your signature:
Show Petition Text

READ: Australian leaders deeply wounded our democracy. They should cancel all COVID fines

What makes governments, healthcare industry CEOs or hospital boards think they know more about medicine than medical practitioners? What is wrong with healthcare workers making their own health choices when it comes to rushed vaccines?

The harm done to Australia’s health system runs deep. For centuries, doctors and nurses have been afforded respect by political leaders and the wider community because it was recognised that medicos must have autonomy to do their jobs well.

It was done that way for supremely practical reasons, and not just to protect the Hippocratic Oath, or the doctor-patient relationship. There was a widespread understanding that the doctors and nurses who work at the coal face can only function properly if they have control over their choices. That tradition has been destroyed in the last three years.

On November 4 the Western Australian the department of health revealed to Perth Live that unvaccinated health staff will be able to return to work. Yet hospitals are still mandating them without the government’s instructions. It is time to restore some sanity by abolishing the vaccine mandates and reinstating these healthcare workers so they can continue to save lives.

Help Monica Smit continue her fight for freedom
Monica Smit's movement is only getting bigger as they fight back against globalist organizations like WHO and WEF. Please consider supporting them today.