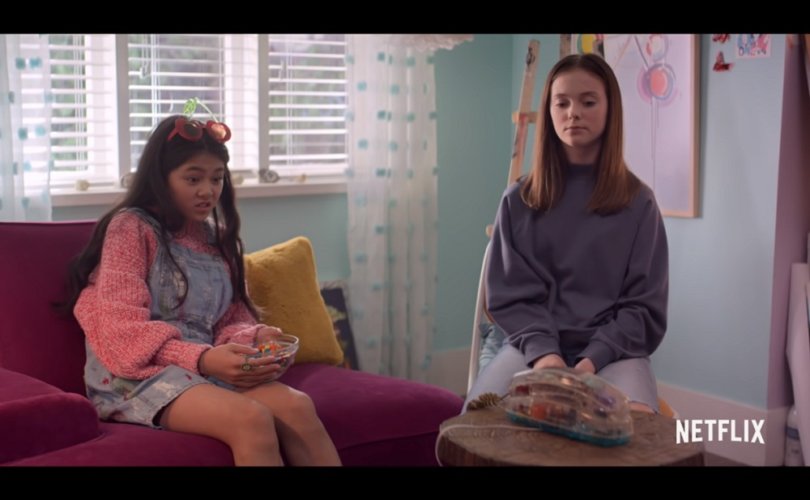 July 7, 2020 (NewsBusters) — In the 1980s and '90s, many young girls devoured the popular book series The Baby-Sitters Club by Ann M. Martin. The novels, about a group of girls in a fictional Connecticut town who run a club of babysitters, sold millions of copies.

On July 3, Netflix premiered a new series inspired by the novels. Since this is 2020, the series makes sure to check-off all the woke boxes required by leftist cultural arbiters.

One of the tween girls in the series, Mary Anne (Malia Baker), babysits for Bailey (Kai Shappley), a “trans girl” who is, in fact, a biological boy around preschool or kindergarten age.

When the boy gets sick while she is caring for him and is rushed to the hospital, Mary Anne gives the doctors at the hospital an anguished lecture about how they ought to refer to the biological boy as a girl. (How dare trained medical staff consider human biology!)

Nurse: If he's dehydrated, we'll need to place an IV. Have him change into this.

Bailey: I don't want the blue one.

Doctor: I hear someone's not feeling well. Let's take a look at the little man.

Mary Anne: Can I please talk to you two outside? I know that you guys are busy. But as you would see, if you looked at her and not her chart, Bailey is not a boy. And by treating her like one, you are completely ignoring who she is. You're making her feel insignificant and humiliated. And that's not gonna help her feel good or safe or calm. So, from here on out, please recognize her for who she is. And if it is at all possible, could you find me a non-blue hospital gown?

Anybody who has ever cared for young children knows that the line between imagination and reality is naturally blurred at that age. Responsible adults understand this and give the child time to grow. But in the world of radical LGBT ideology, refusal to “affirm” gender dysphoria in young children is “transphobic” and mean.

Pushing this agenda on a show for tween girls makes it more difficult for them to fight back against unreality as the radical transgender ideology is increasingly “normalized” through popular culture.

Another “modernization” example is that one of the members of the Baby-Sitters Club (BSC) has a gay dad who FaceTimes with her from California with his gay male partner. The young girl is remarkably well-adjusted for an adolescent whose father divorced her mother to be with another man. She does not seem to struggle at all with what would normally be a painful shock for any child.

And no woke series would be complete without locking tween children who have only just begun puberty into a homosexual identity. So, of course, a seventh-grade boy that the girls meet at the beach casually mentions a romantic crush he had on another boy.

Middle-school boys and girls in our brave new LGBT world have no right to time or development before making a homosexual identity known. That is just “internalized homophobia” or something.

The series also includes a lesbian teacher and her partner. Thus, three letters in the LGBTQIA alphabet are properly covered for the tween audience. The show's producers would not want to make G.L.A.A.D. mad.

Since occultism is a growing part of progressive ideology, as Newsbusters has reported, the series includes a scene of avowed witches meeting together in their “spiritual circle.” There is lots of talk of “spiritual energy” and other occult and New Age practices.

Unlike the darker Chilling Adventures of Sabrina, The Baby-Sitters Club makes occultism light and fun for its adolescent audience, something the “cool” moms are doing.

Lastly, the girls in the series regularly make reference to their feminist bona fides, with one girl even referring to her outfit as “Ruth Bader Ginsburg chic.” Television is just another way for the left to politicize girls early.

Popular culture is a cesspool. Shows targeted to tween girls are deliberately designed to undermine the nuclear family and Judeo-Christian values. (The show includes mention of Buddhism and New Age spirituality, but not a single family seems to go to church.)

Cultural Marxism dominates Hollywood and constantly pushes its radical cultural narrative on younger and younger populations. The series is rated TV-G on Netflix and is listed under the genres Kids' TV and Family Watch Together TV. Sadly, this leaves parents and their children with few good television options anymore.