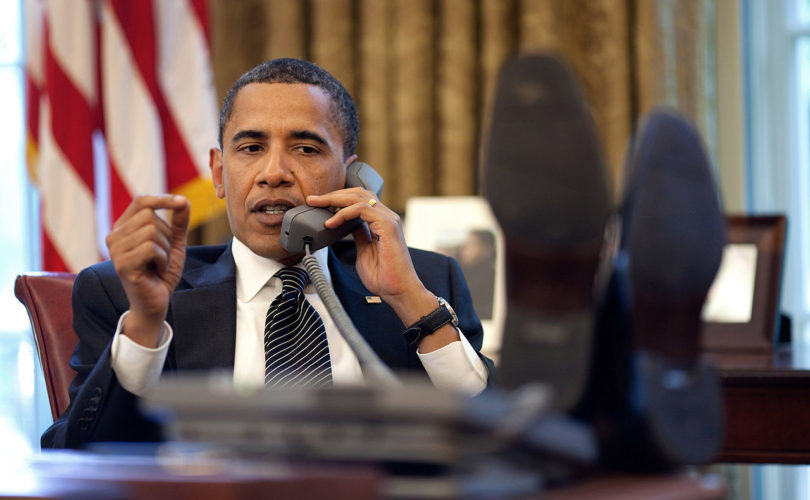 June 3, 2019 (American Thinker) — Late in May, Rush Limbaugh repeated a quote from James Comey in a New York Magazine interview:

I'd moved from communist to whatever I am now. I'm not even sure how to characterize myself politically. Maybe at some point, I'll have to figure it out.

It's hard to pin too much on that quote. Perhaps Comey was joking by calling his vote for Jimmy Carter a vote for a communist, in mockery of his supposedly fellow Republicans.

Joking about support for communism is not all that funny in the Obama administration. Obama's CIA director, John Brennan, actually did vote for a communist presidential candidate. Brennan and Comey are two of the central players in the Russia Collusion Hoax.

Obama chose communists and Marxists for the highest, most powerful positions in our land, including his closest political advisers and his head of the CIA. These facts are not in dispute. Most are openly admitted by the people in question, as necessary damage control. Our press chooses not to report them.

Professor Paul Kengor has extensively researched the Chicago communists whose progeny include David Axelrod, Valerie Jarrett, and Barack Hussein Obama. Add the openly Marxist, pro-communist Ayers, and you have many of the key players who put Obama into power.

Brennan (who was sworn in as CIA director on a draft of the US Constitution, without the Bill of Rights, instead of a Bible) said that while he had voted Communist, he wasn't an official member of the Communist Party — and was relieved that he had been accepted into the CIA.

His Kenyan father was a communist, who met Obama's mother, a radical leftist, in a Russian language class. Stanley Dunham, Obama's white grandfather, chose a notorious member of the Communist Party to be Obama's mentor, Frank Marshall Davis.

Obama wrote in his memoir that in college, he sought out Marxist professors. A Marxist student at Occidental College, John Drew, confirms that Obama was a revolutionary Marxist in college. Drew recounts:

Obama … believed that the economic stresses of the Carter years meant revolution was still imminent. The election of Reagan was simply a minor set-back[.] … As I recall, Obama repeatedly used the phrase “When the revolution comes…” “There's going to be a revolution,” Obama said, “we need to be organized and grow the movement.” In Obama's view, our role must be to educate others so that we might usher in more quickly this inevitable revolution. … Obama seemed to think their ideological purity was a persuasive argument in predicting that a coming revolution would end capitalism.

Obama tells us the radical socialist conferences he attended before law school gave him his road map in life — i.e., their plan to put a stealth black candidate in the White House. Obama's biggest job and his political career in Chicago were launched by self-avowed communist Bill Ayers. Obama's run for state representative was as the handpicked successor of a socialist state representative, who was publicly active in communist circles. Obama's calling in life was work as a hard-left Alinskyite radical agitator. Until he became president, Obama was a 20-year member of an openly Marxist church whose members had to take a pledge against the middle class. When did Obama reject Marxism?

Valerie Jarrett is Obama's closest personal adviser to the present day. She lived with the Obamas in the White House, had dinner with them nightly, and still lives with them in retirement!

Her late father, James E. Bowman … was involved with communist front groups and was in contact with a paid Soviet agent in the 1950s who was wanted for espionage. Jarrett's maternal grandfather, Robert Rochon Taylor, was investigated by the FBI for his membership in communist groups and his business relationship with the same Soviet agent[.] … Her late father-in-law, Vernon D. Jarrett, was assigned by the Communist Party USA to a special cultural arts cell … he was flagged by the FBI as an internal security risk to be swiftly arrested in the event of a hot war with the Soviet Union. The FBI also investigated his wife, Fernetta “Fern” Jarrett, for communist activities.

Kengor discusses new documents obtained by Judicial Watch that show that Valerie Jarrett's father was active on behalf of Stalin in fomenting racial divisiveness in America as a member of the American Committee for Protection of Foreign Born (ACPFB).

ACPFB “was founded by the Communist Party in order to exploit racial divisions in the United States for its own revolutionary purposes.” Its modus operandi was to polarize Americans along racial lines in order to advance the Soviet agenda.”

Axelrod was the chief strategist for Obama's presidential campaigns and a senior adviser in the White House. His mother worked for a communist newspaper. His father, according to Axelrod in his memoir, “listed his party affiliation as 'Communist.'” Axelrod got his start in Chicago politics through working for hard-line Stalinist Soviet agents Harry and David Canter.

The Canters were old hardline pro-Soviet communists, so much so that the senior Canter, Harry Jacob Canter, was actually brought to Moscow during the height of the Stalin period to work for the Soviet government as an official translator of Lenin's writings. Harry was active in the old Industrial Workers of the World and had been secretary of the Boston Communist Party. He was not shy about his political enthusiasm. In 1930, he ran for governor of Massachusetts on the Communist Party ticket. After that, he sojourned to the Motherland, taking his entire family to Moscow with him, including his son David, who one day would come know [sic] David Axelrod… the Canters actually knew and worked with Obama's old communist mentor, Frank Marshall Davis[.] … Davis — again, Obama's mentor — also knew and worked with Valerie Jarrett's grandfather and father-in-law in Communist Party/left-wing circles in Chicago in the 1940s.)

Other Communists, Red Diaper Babies, and Marxists in Obama's Circle

Susan Rice, Obama's national security adviser, was up to her eyeballs in the Russia Collusion Hoax against candidate and then President Trump.

Rice wrote a 426-page dissertation praising, as “a model and a masterpiece in the evolution of international peacekeeping,” … the political ascendancy of Zimbabwe's Marxist dictator, Robert Mugabe. In her dissertation, Rice lauded Mugabe as a “pragmatic, intelligent, sensible, gentle, balanced man” who possessed considerable “patience and restraint.”

David Maraniss, the Washington Post journalist chosen to write Obama's biography, which covered up Obama's radical past, was also a red diaper baby. His father was a member of the Communist Party and worked through a cell in Detroit to secretly influence workers through his articles for the Detroit Times.

Frank Marshall Davis, the biggest influence on Obama's black identity from age ten through college years, was a card-carrying member of the Communist Party.

Frank Marshall Davis was a pro-Soviet, pro–Red China communist. His Communist Party USA card number, revealed in FBI files, was CP #47544. He was a prototype of the loyal Soviet patriot, so radical that the FBI placed him on the federal government's Security Index. In the early 1950s, Davis opposed U.S. attempts to slow Stalin and Mao. He favored Red Army takeovers of Central and Eastern Europe, and communist control in Korea and Vietnam. Dutifully serving the cause, he edited and wrote for communist newspapers in both Chicago and Honolulu, courting contributors who were Soviet agents. In the 1970s, amid this dangerous political theater, Frank Marshall Davis came into Barack Obama's life.

Obama's pastor and personal hero and mentor was an avowed Marxist. His church congregants had to sign a pledge to support redistribution of wealth and reject “middleclassness.” Discoverthenetworks reports:

Rev. Wright's devotion to the tenets of liberation theology, which is essentially Marxism dressed up as Christianity … calls for social activism, class struggle, and revolution aimed at overturning the existing capitalist order and installing, in its stead, a socialist utopia where today's poor will unseat their “oppressors” and become liberated from their material (and, consequently, their spiritual) deprivations. An extension of this paradigm is black liberation theology, which seeks to foment a similar Marxist revolutionary fervor founded on racial rather than class solidarity.

Is it any surprise that collusion with Russia, according to Victor Davis Hanson, was a feature of the Obama presidency?

The Obama administration colluded with Russian agents who produced the Steele Dossier. It was paid for by Clinton, but it was Obama's minions at the FBI, CIA, and White House who weaponized this Soviet disinformation against President Trump.

We are all victims of the Obama cabal's collusion with Russia — President Trump's voters and all Americans who believe in our free and fair election process.