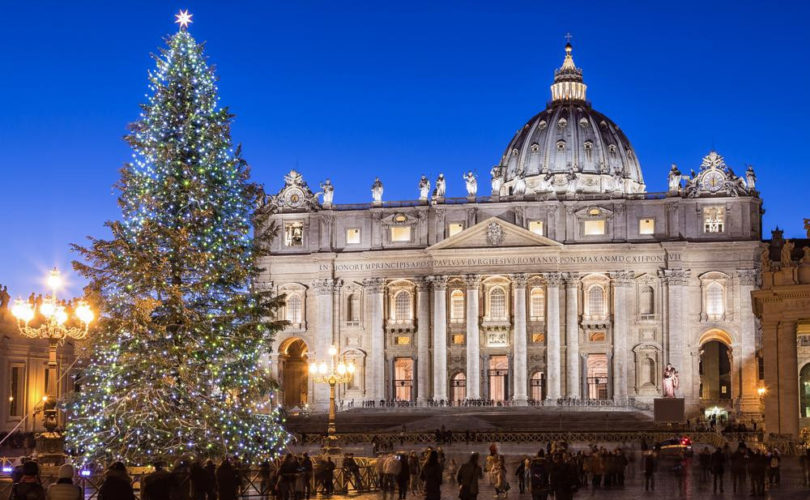 December 24, 2015 (LifeSiteNews) – The Holy Family of Nazareth travelled at the darkest time of the year to give birth to Salvation. So too, Christ travels with us in all of our darkest moments, reminding us that through life’s greatest trials, come the greatest victories. The greater the evil we experience, the greater the good God will bring from it, just as Christ’s crucifixion brought about our redemption.

We are living in one of the most confusing times in history. Good is seen as evil and evil as good. We’ve witnessed this trend already for decades in secular society, with those working for life and family increasingly perceived as oppressors and bigoted, even akin to racists. Now, however, we’re experiencing similar things inside the Church. We see deliberate confusion on basic teachings regarding life and family. We also get an impression of those who remain faithful to the traditional teachings of Christ as rigid, obsessed, harmful, hardliners and lacking in mercy.

But we were warned of such times in Sacred Scripture, when deception would be so great that even the faithful, if possible, would be deceived. Those Catholic prelates who are faithful to the truth, despite the pressures both from without and within the Church, are among the kindest and most merciful of men. I think particularly of that bishop most typically associated with the label of “rigidity”: Cardinal Raymond Burke.

However, in the face of such darkness all around us, Pope Saint John Paul II would remind us, “Be not afraid!” Heaven’s instruction to “be not afraid” came particularly in the lead up to the birth of Christ, and at times when confusion reigned. Think of St. Joseph in agony over the perceived unfaithfulness of the Virgin Mary, being told by the Angel Gabriel, “Be not afraid to take Mary as your wife for the child conceived in her is from the Holy Spirit.” When Zachariah, and then later the Blessed Virgin, see the Angel they are also told “be not afraid.” And finally we read in Matthew 14 that the Apostles were in the boat being tossed about by the waves and are terrified by a “ghost” walking on the water. “Be not afraid,” Jesus tells them. It is He himself with them and with us at all times and especially in our darkest hours.

We know well that reporting on these things about Rome has made us unpopular in some circles. We feel compelled, nevertheless, to speak the truth. Canon law obliges the faithful, especially in such grave times, to respectfully and charitably, but also confidently, speak the truth even to our pastors.

The Code of Canon Law secures for all the Christian faithful, “according to the knowledge, competence and expertise which they possess,” the “right and even at times the duty to manifest to the sacred pastors their opinion on matters which pertain to the good of the Church and to make their opinion known to the rest of the Christian faithful” (Canon 212). St. Thomas Aquinas counsels in the Summa, “When there is an imminent danger for the Faith, Prelates must be questioned, even publicly, by their subjects” (II-II, q.33, a.4).

With the aid of all of our heavenly intercessors, even in the greatest darkness, we need fear no evil, because the Lord’s rod and staff give us comfort. We can do all things through Christ, Who gives us strength. Like the shepherds in the fields we have been told where to seek the Messiah. Let us hasten with them to find Jesus Whom we will always find with, in, and through Mary His Mother.

Since the Synod, we have been witnessing unprecedented declarations by Pope Francis, which seem to indicate openness to the impossible for the Catholic Church. Some of the statements, such as his address to the Lutheran Church in Rome, which you have read about on LifeSite, were so unbelievable we obtained the videos of the Pope making these remarks before publishing them so we could be sure he did in fact say these things.

Given that he has surrounded himself with left-leaning clergy, those statements are easier to understand, but we must pray and fast that Pope Francis may be given the ability to see the truth and embrace it. He has been advised to tone down the language and teachings of the Church on matters that are at odds with the world so as to attract the masses.

That failed strategy was tried in the late 1960s and 1970s and resulted in a mass exodus from the Church that we are still witnessing today. A renewed interest, especially among the young, is seen only in places where tradition has been revived. Nevertheless, the Pope is being counseled to head down the same path, a path warned against by Pope Leo XIII in 1899 in the encyclical letter Testem Benevolentiae Nostrae. According to the encyclical, some contend “it would be opportune, in order to gain those who differ from us, to omit certain points of teaching which are of lesser importance, and to tone down the meaning which the Church has always attached to them.”

However, said Pope Leo XIII, the Church has already visited such suggestions and has determined, “Such a policy would tend rather to separate Catholics from the Church than to bring in those who differ.” Concluding his point, Pope Leo said that there was nothing closer to his heart “than to have those who are separated from the fold of Christ return to it.” He added, however, “but in no other way than the way pointed out by Christ.”

From the board and staff of LifeSiteNews it is my joy to wish you and your families a happy and holy Christmas. May the Babe of Bethlehem be born anew in our hearts. Let us make room for Him and ask Blessed Mother Mary and Good St. Joseph, Patron of the Universal Church, to bring the Light of Christ into our hearts, just as they did in that dark stable in Bethlehem.