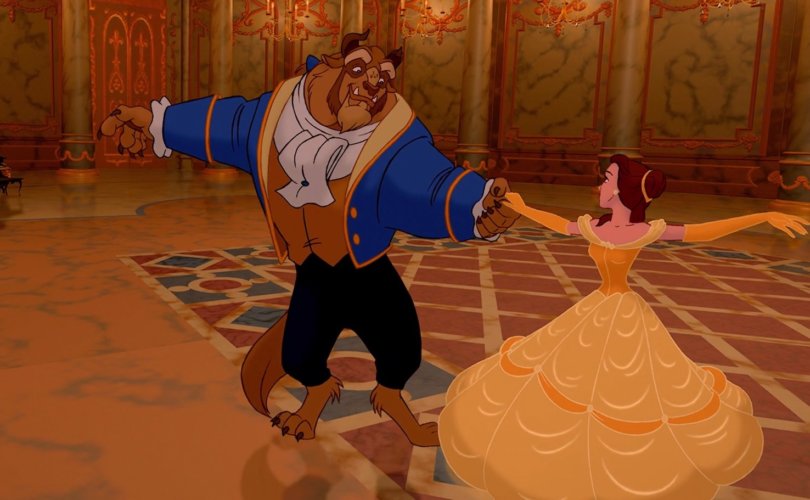 January 26, 2012 (LifeSiteNews) – Beauty and the Beast is out in theatres again, this time in 3D for a whole new generation.  I loved this film when I was a kid. It’s one of the greatest animated films ever produced, with a riveting story, beautiful music, and advanced-for-its-time computer animation.

But when my wife and I sat down to watch it again a few years ago as we awaited the arrival of our first child, I was concerned by how the film seems to instill a negative attitude to traditional family life. And beyond that, I was surprised at how sexually explicit it is for a film touted as family-friendly.

Consider the candlestick Lumiere. We find him in one scene behind a curtain carousing with the featherduster, propositioning her in a raunchy French accent: “Oh yes, yes, yes!”  To which the featherduster says coyly: “I’ve been burnt by you before!” They emerge with him clutching her waist, until he drops her at the sight of Belle. Then after they are returned to human form, we see the voluptuous featherduster-turned-French maid saunter past him seductively, lightly brushing his face. “Heh heh!” Lumiere says as he moves to follow her, presumably hoping to ‘burn’ her again.

Or take the three ‘bimbettes’ always hanging off Gaston’s arm.  Clearly their lust is not held up as virtuous, but their immodesty is a concern nevertheless. In the midst of the song ‘Gaston’, their dresses fly up so you see their underwear.  In one clip of the song ‘Belle’, they depict the red-dressed lady’s breasts bouncing around as she leans over the water pump.

In the same song, the butcher’s wife is shown hitting her husband on the head with a rolling pin while he stares at a patron’s breasts as they protrude out of her dress.

‘I want much more than this provincial life…’

But these sexually explicit segments are only the most blatant aspects of an underlying worldview in the film that I’d suggest risks undermining the beauty and goodness of traditional family life.

Belle sets the tone in the opening vignette when she mourns being stuck in the “provincial life” of her town, instead pining for “adventure in the great wide somewhere.” As she sings, we witness a mother struggling frantically to buy eggs while she juggles three babes in arms with two older children nipping at her heels.

Of course, the villain Gaston is horribly evil. He kidnaps Belle’s father and then tries to kill the Beast so he can forcibly marry Belle. Even his desire for Belle is purely for her physical beauty and to satisfy his own vanity. And yet his evil character ultimately serves to discredit and mock the family values he cherishes.

Gaston’s drive in the film is to get married and settle down for a simple life on a homestead with his wife and large family. “A rustic hunting lodge, my latest kill roasting on the fire, and my little wife, massaging my feet, while the little ones play with the dogs.  We’ll have six or seven,” he says in the proposal scene.

Gaston is a caricature of manly strength and the man’s role in providing for the family.  The paterfamilias is depicted as pig-headedly patriarchal – literally so in one scene.

Belle rightfully recoils at the thought of becoming Gaston’s “little wife,” but it is not just a rejection of him.  The message, it seems, is that settling down with a family is beneath her.

“Madame Gaston, can’t you just see it? / Madame Gaston, his little wife. / No sir! Not me! I guarantee it. / I want much more than this provincial life…”

Even Belle and the Beast are never depicted getting married, and there’s no discussion of family.  The marriage is likely presumed.  But if so, given Belle’s previous scorn for settling down, the film fails by leaving this most basic end of romantic love as merely ancillary.

Is Belle some kind of proto-feminist? Perhaps, but at the same time she stands out as a model of chastity and modesty, and appears lovingly obedient to her father. She is yearning for true manhood, a Prince Charming who will sweep her off her feet, love her courageously, fight for her, and win her heart. It’s truly touching how her tenderness melts the Beast’s heart and her love inspires him to feats of courage.

But unfortunately it is all done in a manner that tends to degrade the simple, humble family life to which most of us, and most of our children, are called.

A story is never just a story

Now, some will say I am taking an ultimately harmless children’s movie far too seriously. But a child’s early years are formative, and negative messages, though seemingly harmless, implant themselves in the child’s psyche and risk causing moral confusion as he or she grows older. We need to protect our children’s innocence.

Even though a child may not fully understand, or is not directly influenced to immorality, a negative message nevertheless militates against the child’s proper formation in the true, the good, and the beautiful.  It becomes all the more confusing when that message is reinforced over and over again by TV, films, and other media as he or she grows up.

A story is never just a story. A movie is never just a movie. Stories carry moral power. Who has not left a movie feeling moved to amend one’s character or take on some great task? It is no different for children.

The ‘provincial life’ is ‘the wildest of adventures’

It is to the movie’s credit if a child leaves feeling moved to seek “adventure in the great wide somewhere,” but sadly it seems to me that that sense of adventure will generally be misdirected away from the simple joys of family life, or “the provincial life” as Belle calls it.

Adventure calls us to rise up and meet some unexpected challenge.  What could be more unexpected than the constant demands brought by the gift of a new human life?  What could be a greater challenge to take up than bearing and raising children with eternal souls?

The home of a family fiercely seeking God’s will is often simple, but rarely quiet or mundane.

The formation of children is serious business

Some very popular videos out there raise concerns that there are numerous messages hidden in Disney’s films, including the word ‘sex’ written at numerous points in smoke and water. (See a video analysis of Beauty and the Beast. Warning: Some offensive language.) But even without these so-called subliminal messages, which skeptics are quick to write off, the film’s explicit sexual content ought to raise alarm bells.

At best, the sexual content amounts to a subtle promotion of promiscuity and a movement towards the sexualization of children. Those segments are even more concerning when combined with what I have I suggested is an over-arching anti-family message.  Unfortunately that message tends to be typical of other modern Disney movies as well, including The Little Mermaid and Aladdin.

My purpose is not to condemn or even tell parents how to handle this film in their family. I know my wife and I enjoyed it as we watched it again in preparation for this article. But, as for us, we have no plans to show it to our young children. The formation of a child is serious business so it’s worth taking time now and then to consider what kind of material we’re sharing with our kids, and whether it’s ultimately leading them to God or away from Him, even in subtle ways.

Patrick Craine is Canadian Bureau Chief for LifeSiteNews.com and the president of Campaign Life Coalition NS.  He lives with his wife and two children in a rural town in Nova Scotia.