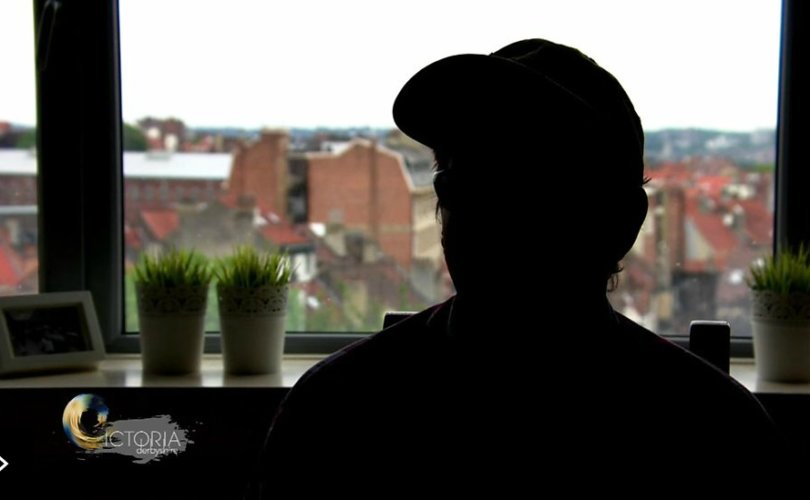 June 13, 2016 (LifeSiteNews) – All of a sudden, euthanasia is not all the mainstream press made it out to be. Major news sources have picked up the story of “Sébastien”, 39, who is asking permission to end his life in his home country of Belgium because he cannot come to terms with his homosexuality. The BBC interviewed him for the Victoria Derbyshire program, asking him to express his fears and “unbearable” suffering. Sébastien has already crossed the first hurdle towards being legally killed: his request is being assessed to determine whether he is mentally competent and whether his suffering is “incurable, constant and unbearable.” In “ordinary” cases, two doctors must agree, but for psychiatric suffering, three doctors are required to agree that there is no other “solution.”

Sébastien might well obtain the fulfillment of his death wish. He still doesn’t know how he’ll break it to his family and friends, he says. But for once in a way, his euthanasia request is not being treated as “courageous” in the press, and that is because he says he can’t cope with his feelings of guilt about feeling attracted to young men and male adolescents.

Reading between the lines, it is easy to see the gist of the story: there’s nothing wrong with being “gay,” so why isn’t Sébastien getting proper care and counseling to get rid of his guilt and get on with his life?

This is where two modern taboos meet and clash: is it more important to affirm the autonomous right to obtain euthanasia, or to condemn a “backward” mindset that conditions ordinary people so deeply that they cannot event be tolerant toward themselves? This is an almost perfect modern-day cautionary tale.

Of course, the BBC, and now the Belgian press have pounced on the story, heavily underscoring the reasons why Sébastien is not as “gay” as he’s supposed to be. It all goes back to his childhood.

“My whole life has led me to this, really. I was so terribly lonely. So terribly retiring. I was afraid to go out, afraid to be seen. Always afraid,” he explains. “My mother had dementia, so I wasn’t right, mentally,” he told the BBC team. But above all – perhaps because his mother wasn’t quite right in the head – Sébastien grew up in a strict Catholic household. Thence the “guilt.” “Guilty guilt,” you could call it: while Sébastien can’t bear responsibility for it, there is no doubt about the true culprits: traditional morality, religion…

“That constant feeling of shame, it’s so exhausting. I’m tired of feeling attracted to people I am not allowed to find attractive,” he told the BBC. Tired of therapy: 17 years of psychiatric treatment to accept his “sexual orientation,” medication and counseling have not dissolved that “shame” that began when he “fell head over heals in love with a boy his own age.” He was 15. “It was unbearable for me. I just didn’t want to be a homosexual.”

The pressure Sébastien feels against giving in to his homosexuality seems to be the real point of the media hype around his case. His death wish is a direct consequence of his upbringing, they are suggesting, so if anyone is truly responsible for the euthanasia he’s hoping for, it will be his family. Or even better: the Catholic Church.

According to Gilles Genicot, professor of medical law at the public university of Louvain and a member of Belgium’s euthanasia vetting committee, Sébastien’s case does not meet with the legal criteria but euthanasia can never be completely ruled out when treatment has been given and is of no effect. “It’s more likely he has psychological problems relating to his sexuality. I cannot find a trace of actual psychic illness here,” Genicot explained to the BBC.

This is completely coherent with modern acceptance of any “sexual orientation”: if being gay is good, “therapy” is pointless (or even an act of “cruelty” in the case of  “gay conversion therapy” that the LGBT community wants it made universally illegal, following the lead of Brazil, several Canadian provinces and a handful of American States).

If Sébastien can’t accept himself as being gay, the problem must be – so the politically correct storyline goes – that is what is wrong with him, and if no amount of psychological counseling can rid him of his guilt (and not his attraction), does he really deserve to live?

The mainstream press will never put it so bluntly. But in recognizing Sébastien’s “hopeless suffering,” in which his guilt and shame are deemed to be the main problem, they are working together to suppress profound truths.