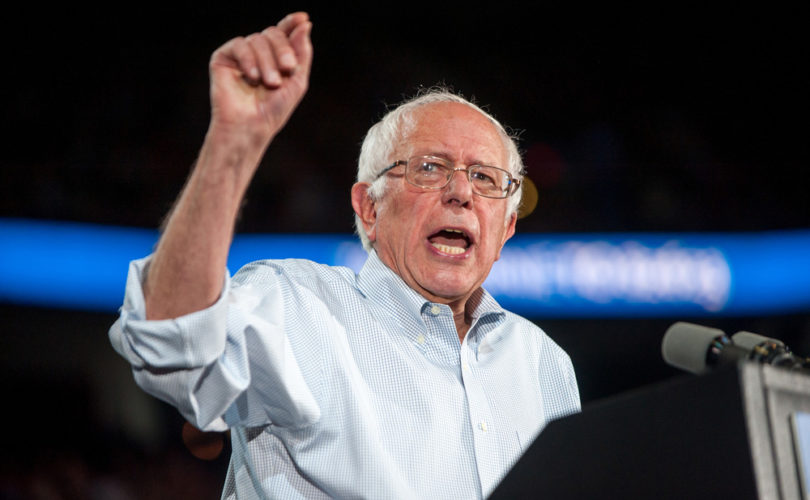 June 23, 2017 (www.thecatholicthing.org) —When we hear about the persecution of Christians, we usually think of increasing attacks by radical Muslim extremists in Muslim-majority countries around the world. But such persecution is also taking place in Western countries as well, though not in the forms of physical violence that we see elsewhere. It’s more subtle and takes place in governments and private businesses – often below the media’s radar.

But an example of this kind of persecution was recently caught on camera during a confirmation hearing in the U.S. Senate. It has caused only a minor stir: the major media couldn’t care less, and the Senate itself is unlikely to do anything about it. Because, you see, the perpetrator was a darling of the media and many senators: Bernie Sanders. And it’s almost an article of faith in some quarters that Sanders is no Joe McCarthy – even if his attack on a Christian appointee, who is not Bernie’s kind of Christian, was vile by normal Senate standards of conduct.

The target was Russell Vought, President Trump’s nominee for Deputy Director of the Office of Management and Budget. Vought has held a number of positions in Republican Party operations, and a former assistant to Sen. Phil Gramm, the turncoat Democrat who is not particularly popular among politicians like Sanders. That alone might disqualify him in Sanders’ eye, but he decided to go after Vought for his religious beliefs as expressed on a blog called the Resurgent. Someone on Sanders’ staff must have dug it up and advised him that this was grist for his effort to derail the nomination.

Vought defended the decision of his alma mater, Wheaton College, an up-front Christian institution, to suspend Larycia Hawkins, an assistant professor of political science, who posted photographs of herself on Facebook in a Muslim head covering, which she pledged to wear at work, in airplanes, and at social events during the weeks before Christmas in solidarity with Muslims facing religious discrimination.

She wrote: “I stand in religious solidarity with Muslims because they, like me, a Christian, are people of the book. . . .And as Pope Francis stated last week, we worship the same God.”

Even if Pope Francis happens to “think” that Christians and Muslims worship exactly the same God, literally millions of other Christians and many Catholics “think” otherwise, based upon their beliefs that God is a trinity of persons and that Jesus Christ is the sole mediator of salvation for mankind. Francis does not speak for all Catholics on this matter, let alone for millions of evangelical Protestants – including Wheaton College.

Now Vought simply wrote, “Muslims do not simply have a deficient theology. They do not know God because they have rejected Jesus Christ his Son, and they stand condemned.”

Sanders erupted: “In my view, the statement made by Mr. Vought is indefensible, it is hateful, it is Islamophobic, and it is an insult to over a billion Muslims throughout the world.” He tried to cajole Vought into denying his faith. Vought attempted to reply, saying, “Senator, I am a Christian.” But Sanders interrupted. “In your judgment, do you think that people who are not Christians are going to be condemned?” And later asked, “Are you suggesting that all of those people stand condemned?” he asked angrily, “What about Jews? Do they stand condemned too?”

Vought simply restated his Christian belief: that salvation comes through Christ alone. But Sanders finally concluded that this Christian belief made him unfit for public office, “I would simply say, Mr. Chairman, that this nominee is really not someone who is what this country is supposed to be about.”

Breathtaking, to say the least. Vought never even hinted that owing to his religious opinions he would deny Muslims their civil or human rights, and Sanders never asked that question. In fact, Vought stated that he believed “all individuals are made in the image of God and are worthy of dignity and respect, regardless of their religious beliefs.” Not enough for Bernie – who argued that he should be voted down just for holding such a belief.

Bernie is not a particularly well-educated person when it comes to world religions. And not particularly perceptive when he steps outside political warfare. He fails to understand is that in excluding the Christians like Vought, he must logically exclude most Muslims as well. For orthodox Muslims, all non-Muslims are infidels, Mushrikun (polytheists, idolaters, pagans, etc.). As such they cannot enter heaven. Virtually all Muslims believe that all infidels are lost.

Regarding infidels, for instance, the Koran says, “while they witness against their own selves of disbelief. . . .The works of such are in vain and in Fire shall they abide.” (Surah 9:17) Hussain Nadim, a faculty member of Quaid-e-Azam University in Islamabad, Pakistan, asked his students the question “Is Mother Teresa going to heaven?” He reported, “To my surprise, more than 80 percent of this educated elite answered the question with a vehement ‘no.’ All of those who answered in the negative explained that while Mother Teresa was a noble woman, she was not a Muslim and, hence, could not enter heaven.”

The belief that being a Muslim is the only way to heaven is surely not a minority belief among educated Muslims. And that means that, according to Bernieism, most Muslims in this country are unfit to hold public office.

I wonder if he would ever call them “Christophobes” who insult over a billion Christians? Probably not, for that might be dangerous.

No, people like Bernie see Christians who hold unpopular beliefs such as “abortion is murder,” or “marriage is only between a man and a woman,” as the only real threat to the secular paradise he wants to build. Muslims are just too few in this country to be a real threat, even if they hold those same doctrines. They can be, however, rather useful pawns for bashing Christians as enemies of the American political system.

This column first appeared on the website The Catholic Thing (www.thecatholicthing.org). Copyright 2017. All rights reserved. Reprinted with permission.