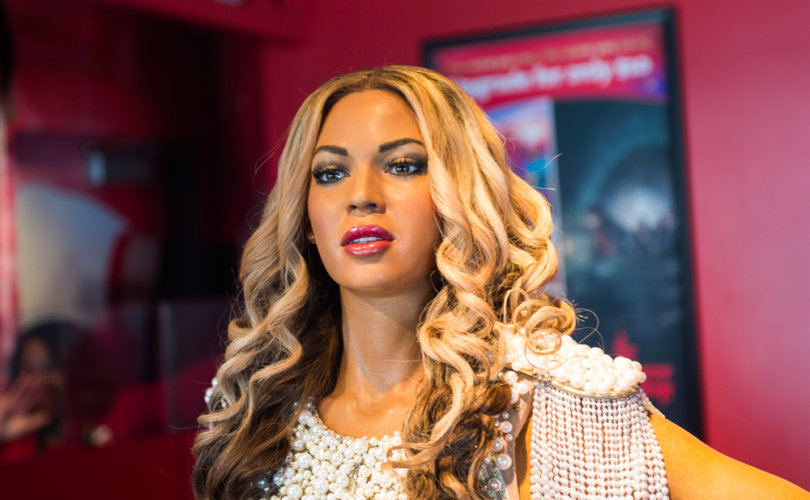 With few exceptions, the entertainment industry is committedly pro-choice. Whether it’s Scarlett Johansson and others in a recent “Stand with Planned Parenthood” ad campaign, stories from celebrities like Whoopi Goldberg about how they don’t regret their abortions, or financial support for Planned Parenthood from names like Lena Dunham, John Legend, and Pink, actors and musicians are overwhelmingly on one side of this cultural debate.

But every so often, someone wanders off-script and talks about the unborn not as mere “rapidly dividing cell masses,” but as babies, with heartbeats, and with value.

The most recent celebrity to break form was singer Beyoncé. Despite participating in the aggressively pro-choice Women’s March in D.C., the expectant mother-of-twins has encouraged her millions of fans to talk about and celebrate her unborn children as if they were, well, children.

At the recent Grammy Awards, she appeared on stage pregnant and dressed as a goddess in a performance dedicated to “birth and motherhood.” Now I’m not endorsing the performance itself, which was pretty bizarre and maybe a little sacrilegious. But what struck many was how Beyoncé and her fans on Twitter and Facebook freely referred to the twins in her womb as “children,” not fetuses or any other dehumanizing euphemism popular with abortion supporters.

Her performance was a follow-up to her recently released pregnancy photo shoot, which took the Internet by storm shortly before the Grammys. In the most-liked upload in Instagram history, Beyoncé posed, hands on her baby bump, with the caption, “I have three hearts.”

Hearts! As in “beating hearts!” As in the kind pro-choice activists go to incredible lengths to convince us are just “contracting cardiac cells.”  And notice Beyoncé also equates her babies’ heartbeats with her own. They are, in her eyes, fully human.

Let me emphasize this: Don’t Google Beyoncé’s pregnancy photos. Some of them are pretty inappropriate. But Beyonce’s Instagram post and Grammy performance highlight the unspoken, false assumption that unborn babies have personhood and humanity only if they’re wanted. If they’re inconvenient or untimely, they’re disposable. In other words, our feelings about them determine what they are.

It was this assumption Yahoo News anchor Katie Couric took into her recent interview on the Ellen DeGeneres show, where she discussed her forthcoming National Geographic documentary on gender identity. Now Couric has made no secret of her support for Planned Parenthood and other abortion providers. For her, the unborn aren’t persons. They’re choices. And yet at the same time she insists that babies in the womb can “feel” gender confusion—something clearly beyond the capabilities of a mere cell mass.

So what’s behind this glaring contradiction? Simply this: the conquest of feelings over reality. According to pro-abortion reasoning, unborn babies, especially early in pregnancy, aren’t human beings with a right to life. Rather, they’re choices to be made.

But pro-choice celebrities have no trouble speaking of their unborn children as being human beings when they choose to keep them. In other words, what makes them human is how their parents, society, or a news anchor feel about them—not some inherent quality they share with all unborn babies.

The Christian worldview cuts in diametric opposition to this anthropology, and to any feelings-centric approach to truth. That unborn babies are inherently valuable image-bearers is true regardless of how we feel about them. Christians embrace objective reality, one not subject to the whims of choice, and not influenced in the least by how famous your mother is.

Now I’m happy for Beyoncé. And praise God for these two new heartbeats. But the thousands of heartbeats quieted each year by abortion are no less human and no less valuable, no matter how we feel about them.