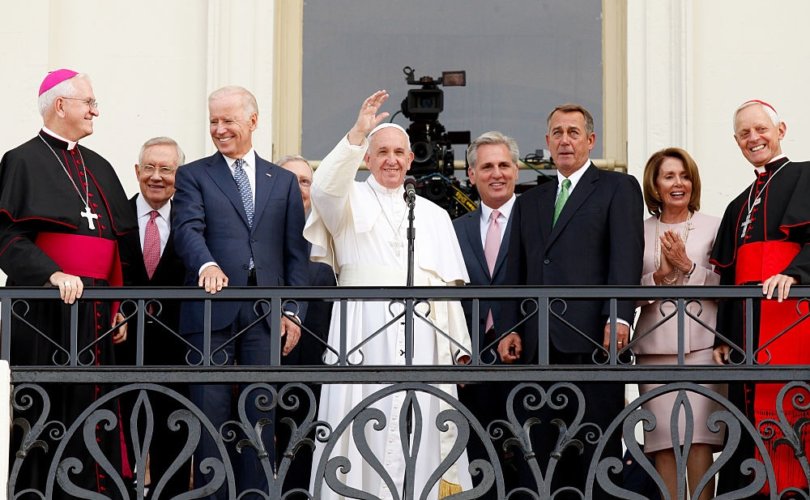 Joe Biden and Pope Francis together on the balcony of the US Capitol building, September 2015Evy Mages / Stringer / Getty

(LifeSiteNews) – U.S. President Joe Biden seems to have reached the extreme limits of denying Church teaching with his aggressive promotion of abortion at every opportunity.

After the Dobbs decision, the “Catholic” president has worked tirelessly and fanatically to sabotage the efforts of countless pro-life Catholics. To the scandal of so many, he has no fear of punishment from complicit bishops, no matter what he does.

However, Biden has taken his denials of the Catholic faith further by adding the grave offense of public blasphemy. In this case, the target of his remark is both the innocent unborn baby and Church teaching.

The sin of blasphemy

The sin of blasphemy occurs when someone takes from the honor due to God or the things related to Him. Thus, a person commits blasphemy when attributing sinful positions or actions to God, the Blessed Virgin Mary, the angels and saints, or Holy Mother Church.

Blasphemy is the gravest sin against the virtue of religion by which the faithful render to God the honor due to Him as their first beginning and last end. Saint Thomas regards it as a sin against faith and characterizes it as “the disparagement of some surpassing goodness, especially that of God.” (See Summa Theologica, II–II, q. 13, art. 1, co.)

Blasphemy is serious because of the infinite and ineffable dignity of God. It is primarily a sin of speech since it often deals with statements against God, sacred things or Holy Mother Church. Our Lady of Fatima especially mentioned blasphemy as one of the sins that most offends the Creator.

The blasphemy of a president is compounded by the importance of the office he holds. His words carry weight and confer an official endorsement. When he speaks, he represents the nation.

Mr. Biden’s particular blasphemy involves his commentary on Sen. Lindsay Graham’s Protecting Pain-Capable Unborn Children from Late-Term Abortions Act, which seeks to forbid abortions past 15 weeks gestation. It is bad enough that the president opposes the measure and misrepresents the bill as harmful to women’s health care.

However, what makes his opposition blasphemous is his insinuation that the Church’s position has changed regarding procured abortion. “I happen to be a practicing Roman Catholic,” the president declared, referring to the bill. “My church doesn’t even make that argument now.”

In this case, the president blasphemes by attributing false and repugnant positions to Holy Mother Church. He says that the Church has changed her position and no longer condemns procured abortion as a grave sin against the Fifth Commandment, “Thou shalt not kill.” He affirms this with the prestige of the presidency and thus misleads the Catholic faithful.

The statement must be taken seriously. It is not just a random remark by an increasingly incoherent leader. Such acts have consequences since they erode moral certainties and contribute to the decay of society and religion in America. Insults directed at God prevent His blessing upon the land and the American people. Worse, these official and public sins invite God’s just punishment upon the nation.

The president’s blasphemous statement is serious because it reflects the existence of a huge sector of the Catholic left that provides cover for such remarks. A vast network of liberal clergy and laity supports the president’s position. The statement exposes a tragic and apocalyptic crisis within the Church herself.

There is a final reason why the president’s blasphemy is serious. The lack of a proportional outrage from Catholics indicates the sad state of the faith in their souls. Such statements should be an occasion of great protest and indignation.

READ: Pope Francis: Biden’s support for abortion is a matter for his ‘conscience’ and ‘pastor’

Above all, bishops must be willing to use their disciplinary powers to insist upon faithfulness and save the laity from public scandal. They should condemn the president’s statement about being a “practicing Catholic” since he obviously rejects Church teaching. Some bishops have called for prayers for a “confused” president (who knows exactly what he is doing).

The president blasphemes because he knows he can rely on the silence of the overwhelming majority of bishops and millions of “practicing Catholics.”