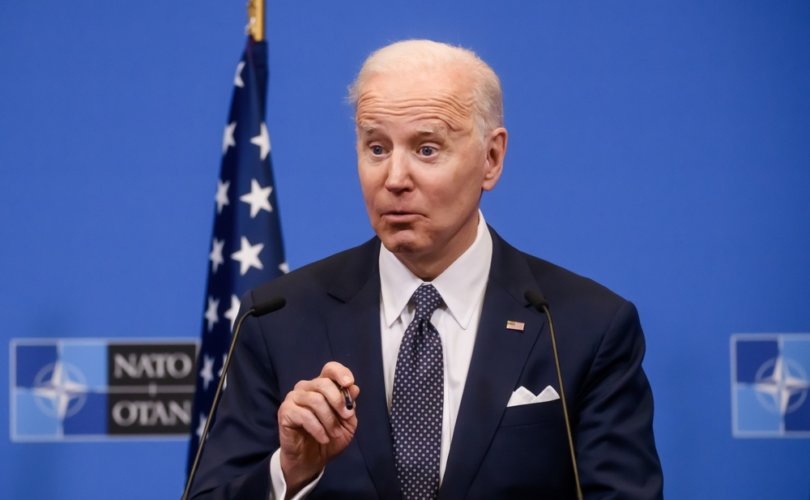 (WND News Center) — Of the many horrors introduced by the Biden administration – open borders inviting millions of unvetted illegal immigrants, including human traffickers, criminals, and terrorists; untold quantities of fentanyl and other dangerous drugs flooding the nation; shutting down pipelines and otherwise making our nation energy-vulnerable; inflation due to rampant money printing – one of the most horrifying is coming down the pipeline.

I refer to digital currency.

In Biden’s vision, digital currency will “advance democracies to lift people up, not to hold them down.” Naturally, digital currency is being offered as a “solution” to problems we never realized we had. It’s touted as far more efficient, easy, environmentally beneficial and even more sanitary than paper currency. With digital currency, gone are the troublesome days when cash must be printed or minted. Now the government can flood the system with untold trillions of digital dollars at the push of a button. Now that’s efficiency!

But despite whatever pretty words they use, there is no question digital currency is a horror show waiting to happen.

There are many risks. Digital currency would be vulnerable to hacking, technological glitches and power outages. Any hiccup in the system would mean your funds are not available “at this time.” When regional disasters happen (such as Hurricane Ian) with widespread power outages, no one in the affected areas would be able to exchange currency, adding additional distress on top of existing misery.

When traditional currency is phased out, everyone will suffer. You can no longer tip your hairdresser or drop a few bucks into a homeless person’s cup. You can no longer sell unneeded items at a yard sale or send your grandkid a $10 bill in a birthday card.

Bitcoin expert Anthony Pompliano calls digital currency “one of the greatest violations of human rights in history.” He writes:

Once a central bank digital currency is in the hands of a population, the central bank has solidified complete control. They will no longer have to go to the court system or invoke emergency powers to tell you who you can transact with. This can all be implemented through remote, digital technologies. These central bankers will be able to see what is in your bank account, who you transact with, what you purchase, and anything else they are curious about in your financial life. That full transparency with the state removes all elements of privacy, while also giving the institutions the ability to censor any and all transactions, regardless of whether they have a legitimate reason or not.

No wonder the current administration is slavering to introduce the so-called “Biden Bucks.”

Increased government control over the monetary system goes hand-in-glove with the social score concept famously wielded by the Chinese Community Party and rapidly being adopted in other nations, including America.

Anything and everything that requires an exchange of currency can be monitored, and transactions can be denied for such things as firearms, meat, or other (currently) legal but politically incorrect purchases. Already the World Economic Forum is launching a coalition to reward people with “carbon credits” for using fewer resources. Digital currency makes this all possible.

The fact is, digital currency is being introduced for one reason, and one reason only: so it can be weaponized against political enemies. And as Biden himself has made abundantly clear in the last few weeks, his political enemies include anyone and everyone who doesn’t wholeheartedly support his growing reign of terror.

Digital currency will allow the government to seize assets at will. Forget those middle-of-the-night FBI raids; just click a button, and the victim has nothing. The mere threat of this possibility will be enough to bring all but the most die-hard rebels into line with the régime.

Catherine Austin Fitts, former assistant secretary of the U.S. Department of Housing and Urban Development, said in a recent interview: “If you can move every human into a digital concentration camp, empty their bank account any time you want, and tell them what they can and cannot spend money on, you’ve got complete control.”

This cascading series of events can happen literally at the push of a button. You won’t be jailed, but you won’t have to be. Your life will become a living hell.

— Article continues below Petition —
Stand with Mark Houck, a pro-life Catholic dad of 7 raided by Joe Biden's FBI
Show Petition Text
8284 have signed the petition.
Let's get to 9000!
Thank you for signing this petition!
Add your signature:
Show Petition Text

“When Biden Bucks are rolled out, many experts – myself included – believe they will begin an era of total government control and surveillance,” says former CIA official Jim Rickards. “This is not hyperbole. This would dramatically expand the power and influence of the federal government … essentially acting as a new type of ‘spyware.’ With Biden Bucks, the government will be able to force you to comply with its agenda. Because if you don’t, they could turn off your money. This won’t be like freezing a bank account, it will be so much easier.”

You might claim this is mere conspiracy theory, but imagine this: Had digital currency been around two years ago, would it have been tied to mandatory COVID vaccines? Short answer: Yes. No vaccine, no access to your money. Easy peasy lemon squeezy.

The launch of this horror story occurred in March with the signing of Executive Order 14067, which laughably claims (among much else), “Any future dollar payment system should be designed in a way that is consistent with United States priorities.” Oh please. Digital currency is the antithesis of American priorities, and certainly goes against everything in our founding documents.

The creepy thing about digital currency is there is no evading it. It would permeate literally every aspect of every person’s life, no matter how off-grid or remote they may be. Some say a barter society will spring up – and indeed, I expect that to happen almost instantly – but you can’t barter for car insurance or property taxes or other government requirements.

A digital currency would, in effect, be the end of America. When this occurs, be sure to thank the people for whom the “Biden buck stops here.”