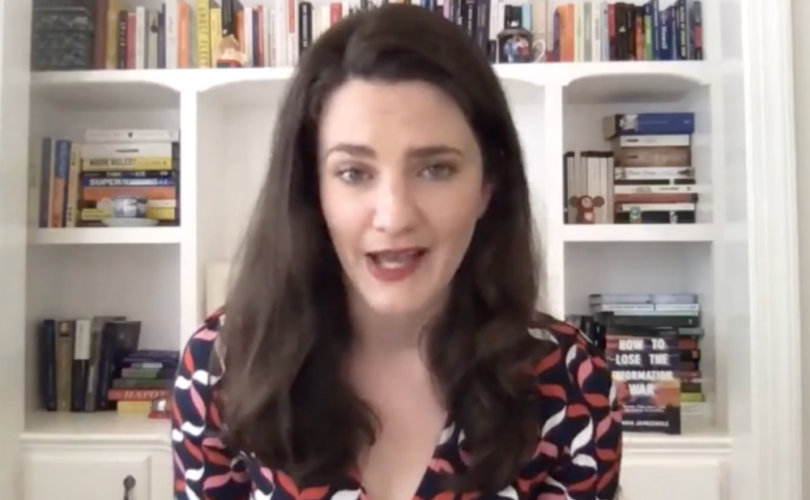 Nina Jankowicz, who would have led the new Disinformation Governance BoardRumble screenshot

(Conservative Treehouse) – It seems we are now seeing the outlines of how the Fourth Branch of Government are planning to keep control over information, specifically public discussion on Big Tech platforms, even as Elon Musk moves to open the valves of information from the social media platform Twitter.

Many eyebrows were raised as the announcement appeared to be an open admission that the U.S. government was going to control information by applying labels, that would align with allies in social media, who need a legal justification for censorship and content removal.

This CISA announcement was quickly followed by various government officials and agencies saying it was critical to combat Russian disinformation, as the events in Ukraine unfolded.

Previously those same methods were deployed by the U.S. government, specifically the CDC and FDA, toward COVID-19 and the vaccination program. All of this background aligns with the previous visibility of a public-private partnership between the bureaucracy of government, the U.S. intelligence agencies and U.S. social media.

That partnership now forms the very cornerstone of the DHS/CISA effort to control what information exists in the public space. It is highly important that people understand what is happening.

In July of 2021 the first admission of the official agenda behind the public-private partnership was made public.

What we are seeing now is an extension of the government control mechanisms, combined with a severe reaction by all stakeholders to the latest development in the Twitter takeover.

For two years the control mechanisms around information have been cemented by governments and Big Tech. Even the deployment of the linguistics around disinformation, misinformation and malinformation is all part of that collective effort.

The collaboration between the government and Big Tech is not a matter for debate, it is all easily referenced by their own admissions. The current issue is how they are deploying the information controls.

We have COVID-19, the vaccination effort and now Ukraine as examples of the collaboration to control information, to control what people are permitted to question and discuss on the internet. Now things are getting much more detailed, and more alarming.

Shortly after Elon Musk made a bid to purchase a single information platform, Twitter, and then expressed his intent to open the speech valves, former Obama administration intelligence officials wrote a letter warning about efforts to break up the information control by Big Tech and Social Media.

That letter was shortly followed by a speech delivered by Obama himself where he specifically demanded that government take a larger role in the control of information, essentially promoting an Orwellian ‘Ministry of Truth’ to control information in the public sphere.

The internet search engine operators have already agreed to align with the interests of the government. That’s not debatable as in the examples of Google and DuckDuckGo to name just two. Social media platforms like Facebook, Twitter, Instagram and YouTube have famously also expressed their intent to align with the control of information, based on the instructions and edicts of the same U.S. government agencies.

Again, this is not a conspiratorial claim, it is self admitted and we have all witnessed it.

Today, however, we are seeing the architecture of how they plan to organize the tools. As POLITICO reported:

“DHS is standing up a new Disinformation Governance Board to coordinate countering misinformation related to homeland security, focused specifically on irregular migration and Russia. Nina Jankowicz will head the board as executive director. She previously was a disinformation fellow at the Wilson Center, advised the Ukrainian Foreign Ministry as part of the Fulbright Public Policy Fellowship and oversaw Russia and Belarus programs at the National Democratic Institute.”

You can read more about Nina Jankowicz and her ideological alignment with the control mechanisms here and here. The bigger picture issue is that DHS will now work around any independence of social media, vis-a-vis Twitter as a free speech platform, by defining the parameters of allowed conversation. A bureaucratic board within DHS will now serve as the group who defines what can and cannot be discussed.

Here’s Ms. Jankowicz in September of 2020. The head of the DHS governance board, Nina Jankowicz, claiming that color revolutions are an appropriate response to rigged elections, but they will never rise in the U.S.<

It doesn’t take a deep thinker to see exactly where this is going. Various U.S. government agencies will now define their interests. The definitions will then be transmitted to the officers within big tech and social media, and any entity who dares to challenge that govt definition or govt narrative will be targeted for content removal.

Permitted speech will be defined by government agencies, and the mechanisms for controlling, targeting or removing speech that challenges that narrative will now lead to content removal. The shift here, the part that must be emphasized, is the official justification in the terms and conditions of the social media platform operators will come from U.S. government agencies, not the platform itself.

Against this backdrop it is not a surprise why Elon Musk’s entry into the information space is now considered a risk.

As the Seattle Times reported recently, highlighting the way in which social media companies are used to control public opinion: “The 2016 U.S. presidential election and the Brexit vote that same year gave Silicon Valley executives, U.S. elected officials and the public a peek into what can go wrong when social media companies opt not to wade too deeply into what people say on their sites.”

Reprinted with permission from the Conservative Treehouse