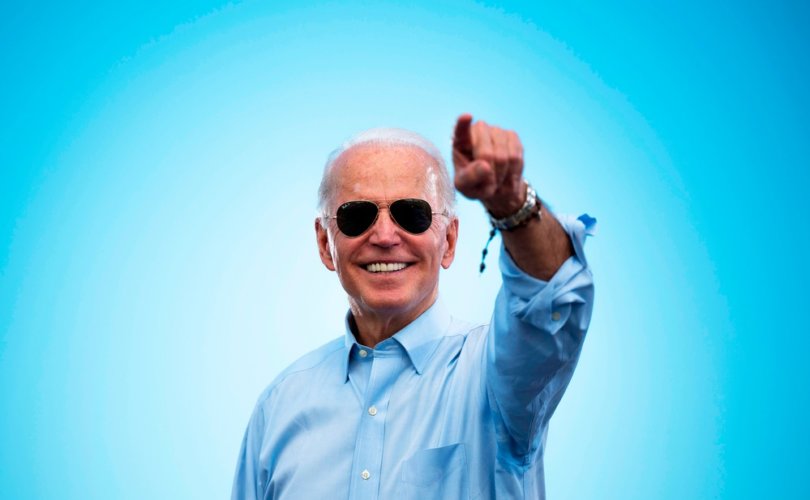 January 26, 2021 (Family Research Council) — If there was a honeymoon, it's over. Less than a week into the administration that isn't Donald Trump's, a surprising number of Americans are already regretting his replacement. Within hours of his swearing in, Joe Biden got right to work — alienating core constituencies with his attacks on oil, energy, unions, jobs, and women. Industries that had lined up to support the Democrat were stunned. What happened to the moderate president they were promised? When Biden said he'd unite America, no one knew it would be against him.

Just three days in, the hashtag #BidenRemorse started popping up on social media. By then, the new president had stopped work on the border wall, shut down the Keystone XL Pipeline, and issued an oil and gas moratorium for drilling on federal land — firing tens of thousands of workers in the process. “Deeply disappointed” was how the head of the North American Building Trade put it, after endorsing Biden in October. “[This] will kill thousands of good-paying #UNION jobs!” tweeted the Laborers' International Union of North America. “[It's] insulting,” the Laborers' president fumed. “[Biden is] pandering to environmental extremists” and middle America, the United Association of Union Plumbers and Pipefitters argued, will pay for it.

In areas like New Mexico, where Biden raked in 54 percent of the vote, local leaders were just as appalled. The administration's new ban on drilling is a death knell for the state, Carlsbad Mayor Dale Janway warned. “[President Biden]… is destroying what's left of our state's economy. How does that bring us together?” he wondered. According to most Americans, it doesn't. Only one in five people in this country have a “great deal of confidence” that Joe Biden can bring the nation together. His early moves, everything from ending women's sports to nixing reliable work, have already made skeptics of key parts of his base.

Just as controversial, some say, is who Biden is giving the dwindling number of jobs to. He's throwing open the borders to Central America caravans and promising amnesty to 11 million undocumented workers. At a time of massive unemployment, that means even more competition for work.

And in places like the military, a radical makeover is guaranteeing that the men and women who do have jobs will be too busy embracing political correctness to execute them. After Donald Trump spent four years rebuilding our troops, Joe Biden threw the military back into turmoil by upending the ban on transgender service Monday. “It is my conviction as commander-in-chief of the Armed Forces,” he wrote in his executive order, “that gender identity should not be a bar to military service.”

Unfortunately for our troops, the new president doesn't seem to care how his social experimentation affects our actual warfighting. Unlike Donald Trump, who insisted the military study the comprehensive effects of such a policy, Joe Biden — from the so-called “party of science” — has not asked for any updated information. In fact, he claimed this morning that opening the doors to transgenderism “does not have any meaningful negative impact on the Armed Forces” and “minimal” effect on “readiness and health care costs.”

That's interesting, since the findings of then-Secretary James Mattis in 2018 were that the Obama administration had to ignore stacks of research to justify the change. After wading through 21 months of actual fallout, the DOD believed that introducing this type of gender chaos into the military presented a “considerable risk” to its “effectiveness and lethality.” The memo does a great job dismantling the flawed and outdated RAND study that both Presidents Obama and Biden have used to prop up their decision. After almost two years of seeing the real impact on troops, the DOD argued that RAND had “mischaracterize[d] or overstate[d] the reports on which it rests its conclusions” (p. 39). “In fact,” officials write, “the RAND study itself repeatedly emphasized the lack of quality data on these issues and qualified its conclusions accordingly” — a fact the Biden administration hasn't bothered to mention.

“Military standards are high for a reason,” Secretary Mattis wrote in the report, “the trauma of war, which all service members must be prepared to face, demands physical, mental, and moral standards that will give all service members the greatest chance to survive their ordeal with their bodies, minds, and moral character intact. The Department would be negligent to sacrifice those standards for any cause.”

Back in 2016, when Barack Obama first injected gender confusion into the ranks, the result was absolute chaos. Instead of making our troops more effective, efficient, and deadly, commanders were retrofitting bathrooms, ordering sensitivity trainings, rewriting health care policies, and worrying how to combat the low morale. At the time, FRC's Peter Sprigg warned that it could cost taxpayers up to $3.7 billion over the next 10 years for medical costs and lost deployment time — more than enough, we pointed out, to buy a Navy destroyer. And like a destroyer, this decision is equally capable of sinking our military's mission.

Even after Donald Trump overturned the policy, taxpayers were forced to make a huge investment in the Left's social Petri dish, sinking well over $8 million into treatments, hormones, and surgeries for the handful of transgender-identifying troops who were grandfathered in. By 2019, the Defense Department announced that it had redirected funds from salaries, equipment, and trainings for 22,992 psychotherapy visits, 9,321 hormone prescriptions, and a whopping 161 surgeries (ranging from hysterectomies and breast augmentation to “male reproductive” construction). Surgeries alone racked up $2 million — an average of $12,422 a servicemember. And that was with the Trump ban in place! Imagine how much Americans will be spending when Biden opens the ranks to this all-expenses-paid gender nonsense for four full years!

FRC's Lt. General (Ret.) Jerry Boykin could only shake his head at the reversal. “This has everything to do with President Biden's LGBT agenda — and nothing to do with military readiness, which should always be the Pentagon's first consideration.”

While America faces rising threats from around the world, it's obvious that Joe Biden is only interested in using our military to fight one war: the culture's.

** For more on Biden's divisive first steps, check out my new op-ed in the Washington Times, “Should Extreme Pro-Abortionist Xavier Becerra Be in Charge of America's Health Care?“