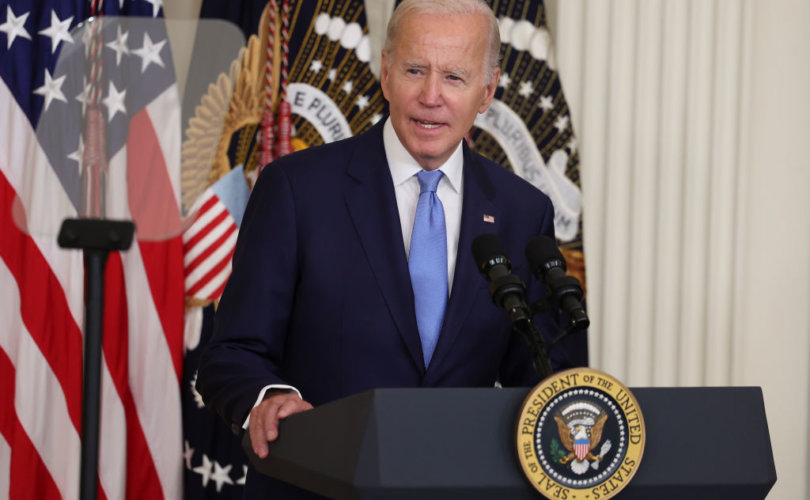 (American Thinker) – If there is anything that has advanced American society, you can be sure that “woke” leftists will destroy it.

So it is with Title IX – a one-sentence statute of the Education Amendments of 1972 that ended sex-based discrimination in educational institutions, opened the doors for women aspiring to become doctors, engineers, or experts in any field of choice, brought parity to college sports, and launched the battle against sexual harassment. In this fiftieth year of that landmark law, the Biden administration wants to rewrite it to suit the radical leftist ideology of gender identity and fluidity.

This is dangerous because it codifies the spreading gender derangement of the left. Worse, it will immerse young minds in learning environments that condition them to believe, without critical thinking, that the biological idea of sex is false. It will unleash other complications as well.

Already, Americans are suffering the tyranny of “woke” ideology. We have reached the abyss in which some people can’t (or won’t) define what a man or a woman is. Girls are forced to share private spaces with biological males. Teachers are cancelled or fired for using the wrong pronouns. Schools are hiding their curricula from the public and parents, who they think might object.

Sadly, the insanity extends to parents losing custody of their children for opposing capriciously imposed (and dangerous) gender “transitions.” The codification of “woke” gender will only cause the unending stream of such cases to proliferate.

— Article continues below Petition —
Free Enoch Burke, the teacher jailed after not using teen's "they" pronoun
Show Petition Text
17729 have signed the petition.
Let's get to 20000!
Thank you for signing this petition!
Add your signature:
Show Petition Text

Even scientists are succumbing to such ideology. Recently, the Scientific American mocked binary sex roles in Western science, taking us into the theater of the absurd. The once respected magazine quoted medical anthropologist (gasp!) Katrina Karkazis saying, “Our bodies are far more variable than our categories. Part of what has happened is people become slotted into this binary framework.” Can she possibly mean that a scientifically and religiously accepted fact – that there are two sexes, male and female – is categorically wrong?

If all this seems part of a passing Orwellian fad, I’m crestfallen to report it’s not. The rewriting of Title IX, proposed by the U.S. Department of Education in June, will perpetuate this irrational cult by embedding its ideology in our children through twelve years of school and another four or more of college.

The Biden administration is working to expand the legislation to legitimize ideas of gender fluidity; indoctrinate children to believe they were born in the wrong body; limit free expression; and promote transitioning in school – even of minors – without parental knowledge.

With the changes, “sex-based harassment” could apply to the use of biologically accurate, albeit non-preferred, pronouns, or an abandoned name. If Susie transmogrifies to Steve – or even just starts thinking and acting as if she were Steve – and you, a student or teacher, use his former name, watch out!

Like commissars, Title IX coordinators appointed under the new regulations will be able to file complaints against teachers, school officials, or other students without a child or her parents’ consent. The proposed law will broaden the definition of sexual harassment and could result in a burgeoning of investigations of allegations that a learning environment is “hostile” – whether it really is or is merely perceived to be hostile. Schools will even have the right to investigate and punish students for alleged violations outside school property or beyond their jurisdiction.

Certainly, such legislation would do nothing to improve safety. With schools legally bound to permit males who decide they identify as females to use bathrooms, locker rooms, and other private spaces meant for females, the risk of harassment and sexual assault will skyrocket.

In sports, girls and women will be forced to engage in unfair competition with biological males and thus have reduced access to scholarships. “In the last few years, transgender boys have won 22 championships against girls,” said Senator Tommy Tuberville (R-AL) on Fox & Friends, adding that this would “bring women’s sports to its knees.”

Attorneys General in 18 Republican-led states told Secretary of Education Miguel Cardona that the proposed protections for transgender students would “destroy women’s sports.” Currently, 13 states have bans on biological males identifying as female from participating in school sports designated for girls. Other states are considering similar legislation. But the proposed changes to Title IX will render the traditional separation of the sexes illegal.

The changes to Title IX will legitimize behavioral standards based purely on ideology – not science – and dramatically change the outcomes of lawsuits filed to protect the rights of teachers, students, and parents, many of which have been successful. Essentially, schools will be forced to implement policies violating First Amendment rights to free speech and freedom of religion. For example, a teacher holding religious beliefs that reject gender transitioning could be forced to teach a chapter celebrating the concept.

Earlier this year, the Kiel Area School District (KASD) in Wisconsin accused three eighth-grade boys of sexual harassment for using “incorrect pronouns” while talking about a classmate though the pronouns were biologically accurate. The district’s policy is that once a student announces preferred pronouns, any “mispronouncing” constitutes sexual harassment.

In a media statement, the school said: “The KASD prohibits all forms of bullying and harassment in accordance with all laws, including Title IX, and continues to support ALL students regardless of race, color, religion, national origin, ancestry, creed, pregnancy, marital status, parental status, sexual orientation, sex (including transgender status, change of sex or gender identity.”

The Wisconsin Institute for Law & Liberty, a non-profit law firm based in Milwaukee, defended the boys in a letter to the district administrators, contending that the use of biologically correct pronouns does not constitute sexual harassment – neither under Title IX nor under district policy. It argued that compelling a mode of speech violated First Amendment rights. Eventually, KASD backed down and the investigation was “closed.”

At Shawnee State University in Ohio, a philosophy professor was formally reprimanded for refusing to use a transgender student’s preferred pronouns. Nicholas Meriwether had a warning placed in his employee file and was told to address transgender students as they requested “to avoid further corrective actions.”

The Alliance Defending Freedom, a Christian legal advocacy group, filed a lawsuit on his behalf, saying the school’s requirements violated his First Amendment rights – “the right to speak and act in a manner consistent with (his) faith and convictions.” To settle the lawsuit, the university will pay the professor $400,000 in damages and attorney fees.

But if discrimination by gender identity becomes codified in Title IX, it could affect the outcome of such cases. The relevant questions are: Will charges of a “sexually hostile environment” be allowed to override First Amendment rights? Will the law restrict the right of students and teachers to express opinions that may be considered offensive? The answers remain to be seen, as does the future of the Biden administration’s ill-advised proposal to change Title IX.

To stop this dangerous agenda, submit a public comment on Title IX before September 12 here, to the Federal Register (Docket ID: ED-21-OCR-0166). You may also join the campaign initiated by Child & Parent Rights here.

Reprinted with permission from the American Thinker.