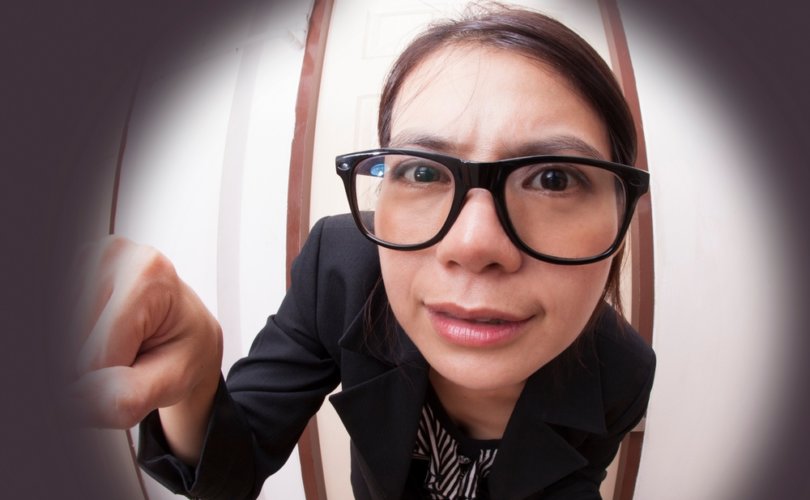 Maligning “big government” is popular, true, but it is not the size of government that actually causes the worst problems. The inefficiency of “big government” pales in comparison to the damage done by the personal corruption of politicians and bureaucrats. This is what really makes government power matter, because the more power government has, the worse abuse of that power will be. And while the effects of politicians’ corruption may diminish if they lose re-election, unelected bureaucrats are often virtually “unfireable.”

These are points to ponder as Oregon considers establishing home visits by nurses where newborns (or new adoptees) reside.

“Why not make it easier for new parents to give their babies good medical care? Especially low income parents? And hey! We could also use this as a way of monitoring bad parenting habits, maybe even heading off trouble that could land the kids in foster care!”

Now I ask you, who in their right mind would oppose such good things? Well, just a guess here, but…parents who don’t want the government to monitor and regulate the parenting of their children? Because let’s face it: The home visits would get to be mandatory. No sense funding the “service” if only a few use it. And anyway, if we’re serious about raising the standard of health care, or about reducing the number of kids in foster care, better to catch problems early. So all new parents will have to be included (and no exceptions for parents who don’t want their bad habits exposed).

Oregon’s proposal is still in the discussion phase, but the rest of us should think about it. Because if it happens, and its proponents can claim that it “works,” it will be proposed in other states, maybe even yours.

Having unsolicited nursing visits to newborns’ homes is actually not a new idea. Many of us in the adoption field know that Georgia Tann used them, and we should not let that happen again.

Georgia Tann almost single-handedly “invented” adoption in the United States as we know it today. Many are surely grateful for that, but she also committed a lot of crimes in the process.

Operating out of Memphis, Tennessee, between 1924 and 1950, she had the protection of the famously corrupt mayor of Memphis, E. H. “Boss” Crump, the legal help of Shelby County Family Court Judge Camille Kelley – who would falsify the papers needed for Tann’s operations – and “acquisition” help from many lower level functionaries like nurses, social workers, and even police officers. Many children were simply stolen, even out of hospital nurseries, and mostly from poor parents. (She believed children of poor parents were better off being “moved” to wealthy ones.)

One of Tann’s many tricks was a nurse’s “surprise” home visit to poor parents of a newborn. Given promises of free medical care, the parents would let the nurses take their babies. (If the parents managed to follow up, they were told, balefully, that their child had died.) Once abducted, the children were routinely abused, some even fatally, while waiting to be adopted from one of the several “homes” Tann amassed. The kids were merely “inventory” in Tann's operation.

Now, I don't mean to be an alarmist here. I support good medical care for babies, I wish fewer kids had to be placed in foster care, and “better” adoption regulations are in place now.

The safeguards will sound ample, but we should not tempt bureaucrats with easily abused power over parents.

Are there “bad” parents out there? Yes. Too many of them, in fact. But what about the presumption of innocence? Are we so mistrustful of parents – who usually love their children – that we want the government to monitor and regulate their care of their kids? Do we suspect that they are “guilty” unless a nurse confirms otherwise?

Let’s not go there.

Birney Bull is an adoption attorney in Savannah, Georgia.