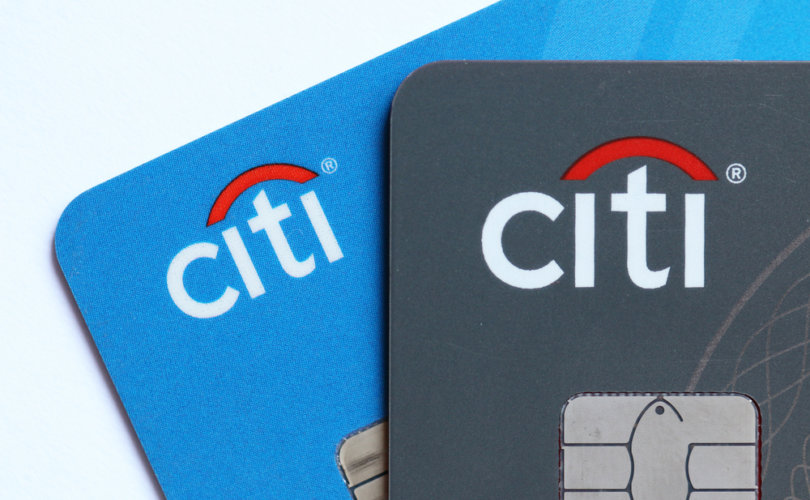 (LifeSiteNews) — Recent pro-life bills have tacitly relied on the hassle women encounter in traveling across state lines to obtain an abortion. Timing, costs, and other factors may inhibit their ability to obtain the procedure as they may no longer be able to have abortion within their own state.

This was seen in Texas, where the state’s controversial heartbeat law has apparently prompted an exodus of women seeking abortions in Oklahoma, Colorado, and Louisiana. While Texas has released data on the precipitous drop in abortions since the law’s implementation, it’s unclear how many women have given birth where they otherwise wouldn’t have. Luckily for the left, their corporate allies succeed in securing access where the pro-choice movement falls short.

One of the top investment banks in the world — Citigroup — announced this week that it would fund cross-state travel (airfare, etc.) for employees seeking abortions.

In a public filing, the bank said that “changes in reproductive health-care laws in certain states” had prompted them to “provide travel benefits to facilitate access to adequate resources.” Citigroup reportedly has more than 8,500 employees located in Texas, where a court effectively let the state’s abortion law stand.

One might think that funding abortion travel primarily allows corporations to broadcast a social justice-y image in the press and ward off woke boycotts. But the end of another human being’s life offers much more in potential gains for corporations’ bottom lines. At least that’s the indication of the RHIA Group, a pro-choice investment firm that made the “business case” for abortion and other forms of “reproductive health” in 2020.

Dubbed “Hidden Value,” the report claims that “support for reproductive health care has a positive impact on a range of corporate stakeholders from employees to investors, and that the negative consequences of inaction are far reaching and impact the bottom line.”

Its report argued that offering those services afforded businesses an array of benefits — from staff retention and attracting talent to “providing high-impact benefits with low-cost investments.” Later on, it adds that “[w]omen who cannot access abortion are three times more likely to leave the workforce.”

Top executives from more than 180 companies similarly signed a letter in 2019 warning that abortion bans were “bad for business.” Signatories, which included Twitter CEO Jack Dorsey and other household brands, said “the economic losses from existing abortion restrictions, including labor force impact and earnings, already cost state economies across the nation an estimated $105 billion annually.”

Anyone who has been through a pregnancy will tell you it’s messy. Bringing a new life into the world costs a lot of time, money, and resources that ultimately hinder the efficiency naturally sought in a competitive economy.

That might be why so many American corporations have donated to Planned Parenthood. Or why companies like Disney have threatened to boycott Georgia’s purportedly “anti-choice” abortion law while passing off concerns about the abortions forced on Uyghur women.

Abortion providers benefit from the most powerful forces in U.S. industry. Planned Parenthood, according to the group 2nd Vote, received donations from dozens of companies like American Express, Bank of America, ExxonMobil, and others.

It isn’t just major household brands that support the practice either. It’s the billionaires whose investments direct the economy as well. Behind the rhetoric of women’s rights is billionaires’ interest in population control — something they share with Planned Parenthood’s eugenicist founder Margaret Sanger.

The liberal outlet Vox put it this way: “If you could snap your fingers and rid the world of billionaire philanthropists instantly, hundreds of millions of women worldwide would lose access to contraception. And in the US, only the rich would have access to legal abortion.”

In 2020, Live Action released a report outlining the well-funded nexus of billionaires, population control interests, “reproductive health care,” and the abortion pill. For example, RHIA Ventures has received funding from the David and Lucile Packard Foundation, whose namesake led the tech company Hewlett-Packard.

A French company donated the patent for the pill to the Population Council, whose leader at one time said “birth control and abortion are turning out to be the great eugenic advances of our time.” Started by John D. Rockefeller III, the organization has received money from the foundations of Microsoft’s Bill Gates, David and Lucille Packard, liberal megadonor George Soros, and Henry Ford of Ford Motors. Organizations associated with Gates, Buffett, and Packard collectively spent billions of dollars on so-called reproductive health. Danco Laboratories, which manufactures the abortion pill, was started by the Council and receives funding from similar sources (Buffett, Packard, and Soros), according to Live Action.

It’s no secret that the sources of these funds are interested in managing population levels. For example, Packard’s son David said that his father thought “unless we can limit the population, the other problems are eventually going to become unmanageable.”

The financial returns on abortion are more easily observed in fetal tissue research, where institutions can access a bevy of funding if they are able to obtain baby body parts.

According to the White Coat Waste Project, the National Institutes of Health expected to spend $88 million on fetal tissue research in fiscal year 2022. If institutions can obtain aborted fetal tissue, there’s a smorgasbord of funding to be found among private organizations and federal grants.

Facebook CEO Mark Zuckerberg’s foundation, along with NIH, has also invested in an expansive human cell atlas project, which involves at least  “121 human fetal samples ranging from 72 to 129 days in postconceptual age.” Embedded in various universities is the Ryan Residency Program, which trains doctors to perform abortions. In 2010, The New York Times reported that the program had only one funder — the Susan Thompson Buffett Foundation, previously led by Buffett’s ex-wife Susie.

In describing the organization’s mission, Buffett’s daughter Susie said: “Population control was what my father has always believed was the biggest and most important issue, so that will be the foundation’s focus.”