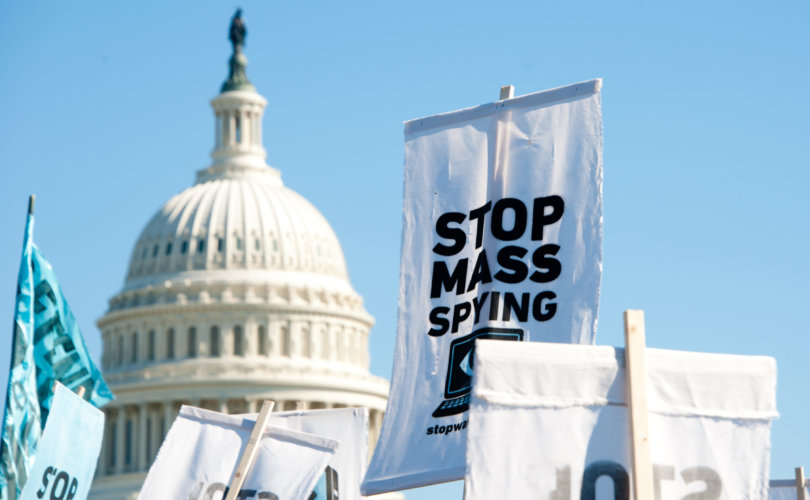 First, Julie Kelly noted that the Department of Justice (DOJ) is using social media chat messages as evidence in court against J6 detainees: “DOJ and Big Tech are working seamlessly to excavate private messages and info from deleted accounts to use as incriminating evidence for J6ers.”

Second, Miranda Devine wrote in the New York Post about Facebook spying on private messages to identify people who questioned the outcome of the 2020 election.

This “surveillance system” has been of great interest to Conservative Treehouse for several years, in part because it is a key aspect of the domestic intelligence system now operating as a functioning part of the Fourth Branch of Government. The overwhelming majority of the investigative resources within the Department of Homeland Security (DHS) are used in this whole of network monitoring system.

I cannot emphasize the importance of the connections enough.

Surveillance of domestic communication, to include surveillance of all social media platforms, is now the primary mission of DHS. The information is gathered by social media, funneled by direct portals into the DHS network then distributed to DOJ-NSD (Department of Justice – National Security Division) and Federal Bureau of Investigation (FBI) officials as well as the Office of the Director of National Intelligence. This communication surveillance network is what DHS, created as an outcome of the Patriot Act, is all about.

The four pillars of the Fourth Branch of Government are: DHS, ODNI (Office of the Director of National Intelligence), DOJ-NSD and the revised/political FBI. All four pillars were created as an outcome of the Patriot Act. These institutions – as specifically named – represent the domestic surveillance state. The subsidiary institutions like the Transportation Security Administration (TSA), exist under their authority. There is no oversight or counterbalance to this system. The Fourth Branch exists using the shield of “national intelligence” to hide their activity. Domestic surveillance is done by the intelligence apparatus under one big connected system, operated by the ODNI and DHS.

Facebook has been spying on the private messages and data of American users and reporting them to the FBI if they express anti-government or anti-authority sentiments — or question the 2020 election — according to sources within the Department of Justice.

Under the FBI collaboration operation, somebody at Facebook red-flagged these supposedly subversive private messages over the past 19 months and transmitted them in redacted form to the domestic terrorism operational unit at FBI headquarters in Washington, DC, without a subpoena.

It was done outside the legal process and without probable cause,” alleged one of the sources, who spoke on condition of ­anonymity.

Facebook provides the FBI with private conversations which are protected by the First Amendment without any subpoena.

These private messages then have been farmed out as “leads” to FBI field offices around the country, which subsequently requested subpoenas from the partner US Attorney’s Office in their district to officially obtain the private conversations that Facebook already had shown them.

None of this should be surprising to anyone who has been reading our research about the domestic intelligence apparatus and their connections to the Big Tech platforms.  The largest social media networks are fully compromised by this relationship, and that is exactly why the legislative branch has not done anything to impede (i.e. breakup) the tech monopoly system that was created.

Example: “Jack’s Magic Coffee Shop” (Twitter), essentially a global and public commenting system, could not feasibly exist without the support of the U.S. government providing extreme scale data-processing. Also, specifically because the platform is in a symbiotic relationship with the intelligence apparatus, the intelligence community itself has contracted people working within the platform.

The whole system was admitted in a 2021 Reuters article outlining the networks and their surveillance relationship with DHS.

We have been trying to hammer this issue for a long time, because at the end of this continuum people will eventually be given digital identities. It’s just the natural outcome if you follow the arc of how this is operating. Once a digital ID is established, all of your activity is then connected to it and a digital currency system emerges.

The biggest names in Big Tech announced in June their partnership with the Five Eyes intelligence network, ultimately controlled by the NSA, to: (1) monitor all activity in their platforms; (2) identify extremist content; (3) look for expressions of Domestic Violent Extremism (DVE); and then, (4) put the content details into a database where the Five Eyes intelligence agencies (U.K., U.S., Australia, Canada, New Zealand) can access it.

Facebook, Twitter, Google and Microsoft are all partnering with the intelligence apparatus. It might be difficult to fathom how openly they admit this, but they do. Look at this sentence in the press release (emphasis mine):

The Group will use lists from intelligence-sharing group Five Eyes adding URLs and PDFs from more groups, including the Proud Boys, the Three Percenters and neo-Nazis.

Think about that sentence structure very carefully. They are “adding to” the preexisting list… admitting the group (aka Big Tech) already have access to the intelligence-sharing database… and also admitting there is a preexisting list created by the Five Eyes consortium.

Obviously, who and what is defined as “extremist content” will be determined by the Big Tech insiders themselves. This provides a gateway, another plausible deniability aspect, to cover the Intelligence Branch from any oversight.

When the Intelligence Branch within government wants to conduct surveillance and monitor American citizens, they run up against problems due to the Constitution of the United States. They get around those legal limitations by subcontracting the intelligence gathering, the actual data-mining, and allowing outside parties (contractors) to have access to the central database.

The government cannot conduct electronic searches (4th amendment issue) without a warrant; however, private individuals can search and report back as long as they have access. What is being admitted is exactly that preexisting partnership. The difference is that Big Tech will flag the content from within their platforms, and now a secondary database filled with the extracted information will be provided openly for the Intelligence Branch to exploit.

The volume of metadata captured by the NSA has always been a problem because of the filters needed to make the targeting useful. There is a lot of noise in collecting all data that makes the parts you really want to identify more difficult to capture. This new admission puts a new massive filtration system in the metadata that circumvents any privacy protections for individuals.

Previously, the Intelligence Branch worked around the constitutional and unlawful search issue by using resources that were not in the United States. A domestic U.S. agency, working on behalf of the U.S. government, cannot listen on your calls without a warrant. However, if the U.S. agency subcontracts to say a Canadian group, or foreign ally, the privacy invasion is no longer legally restricted by U.S. law.

What was announced in June 2021 is an alarming admission of a prior relationship along with open intent to define their domestic political opposition as extremists.

As reported by Reuters:

A counterterrorism organization formed by some of the biggest U.S. tech companies including Facebook (FB.O) and Microsoft (MSFT.O) is significantly expanding the types of extremist content shared between firms in a key database, aiming to crack down on material from white supremacists and far-right militias, the group told Reuters.

Until now, the Global Internet Forum to Counter Terrorism’s (GIFCT) database has focused on videos and images from terrorist groups on a United Nations list and so has largely consisted of content from Islamist extremist organizations such as Islamic State, al Qaeda and the Taliban.

Over the next few months, the group will add attacker manifestos – often shared by sympathizers after white supremacist violence – and other publications and links flagged by U.N. initiative Tech Against Terrorism. It will use lists from intelligence-sharing group Five Eyes, adding URLs and PDFs from more groups, including the Proud Boys, the Three Percenters and neo-Nazis.

The firms, which include Twitter (TWTR.N) and Alphabet Inc’s (GOOGL.O) YouTube, share ‘hashes,’ unique numerical representations of original pieces of content that have been removed from their services. Other platforms use these to identify the same content on their own sites in order to review or remove it.

The influence of the Intelligence Branch now reaches into our lives, our personal lives. In the decades before 9/11/01 the intelligence apparatus intersected with government, influenced government, and undoubtedly controlled many institutions with it. The legislative oversight function was weak and growing weaker, but it still existed and could have been used to keep the intelligence community in check. However, after the events of 9/11/01, the short-sighted legislative reactions opened the door to allow the surveillance state to weaponize.

After the Patriot Act was triggered, not coincidentally only six weeks after 9/11, a slow and dangerous fuse was lit that ends with the intelligence apparatus being granted a massive amount of power. The problem with assembled power is always what happens when a Machiavellian network takes control over that power and begins the process to weaponize the tools for their own malicious benefit. That is exactly what the installation of Barack Obama was all about.

The Obama network took preassembled intelligence weapons we should never have allowed to be created and turned those weapons into tools for his radical and fundamental change. The target was the essential fabric of our nation. Ultimately, this corrupt political process gave power to create the Fourth Branch of Government, the Intelligence Branch. From that perspective the fundamental change was successful.